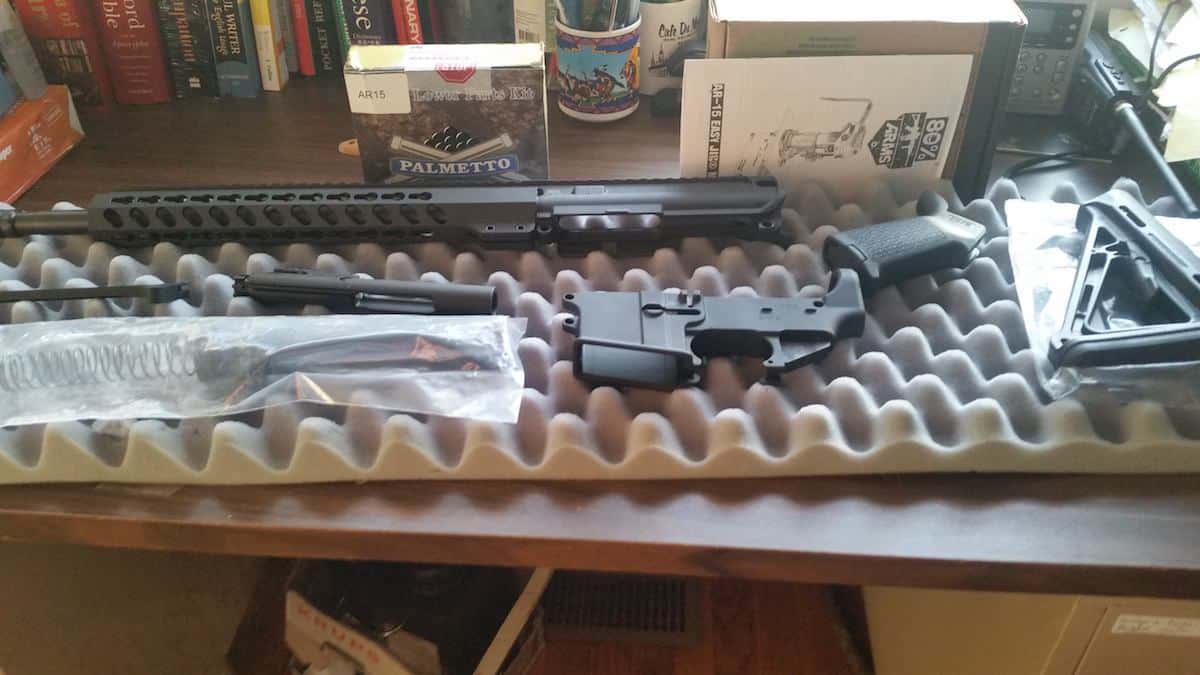 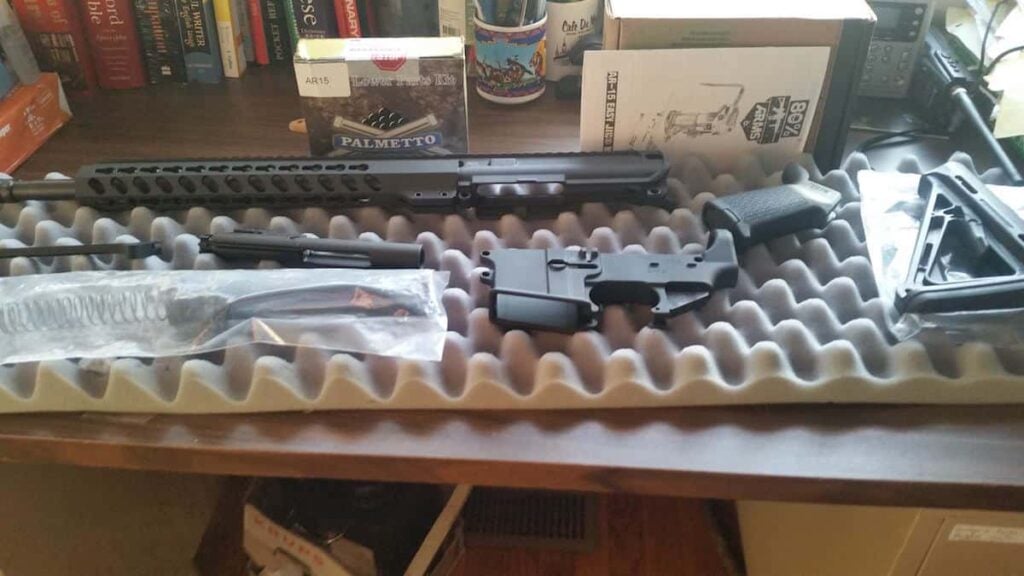 It’s been a long year in firearms media, so as an early holiday gift to myself I decided it was time to pull the trigger and buy or build an AR-15.  After a little research, I made out like a bandit with a sale at the appropriately named 80-Lowers and scored a complete AR build kit with a couple of  80% lowers along with the jigs and tools necessary to complete it.

Shipping took about four days—I won’t lie, it felt like Christmas when this thing got here. The kit I had ordered was chambered in .300 Blackout in order to satisfy another curiosity of mine. I wasn’t quite prepared for what I got, however.  I had mentally prepared myself for no-name parts or a mixed bag of brands. Instead 80-Lowers sent a Palmetto State Armory upper (which means an FN barrel) and internal parts kit.  A well-made, well staked bolt. Magpul stock and pistol grip. Far, far higher quality than I was expecting.

What have I gotten myself into?

We all know what an AR looks like, but I’ll admit that I had never considered doing an 80% lower build before.  Thus I wasn’t quite sure what to expect from the finishing jig I had bought.  I still probably don’t know, but I can tell you that on first impression this thing is solidly built: beautifully machined and finished pieces of steel and aluminum with drill holes and measuring gauges very clearly labeled within the design.  When assembled for use, this is a heavy piece of equipment—do not risk dropping it on your foot.

While the written instructions included were crystal clear and easy to follow, I do recommend jumping on YouTube and checking out a few videos of the build process. There are steps that are easier to follow visually and how-to videos also tend to contain additional tips for a smooth build.

80-Lowers claims that you can complete the build in a few hours, and that the only tools needed  are a vise, a hand drill, and a router. I can attest that this is all true, and that finishing a lower that way is quick and relatively easy. That having been said, I’m new to this kind of thing and suffering from a touch of early-onset arthritis, so I elected to use a drill press for a few of the steps in completing my first lower.  A press makes it easier and gives you much finer control, but the overall process takes a bit longer. However, both the folks at 80 Lowers and myself would like to stress that a drill press is the preferred method if you want quality results.

After a fun afternoon of making aluminum chips fly with only the bare minimum of swearing, I had a couple of fully finished lowers. After a pleasant and relaxing morning in my workshop, I had a complete AR15. All the remained was the acquisition of enough ammo and some time and the range for a test run . . .

Why no build pictures?

It’s been one yr since I decided to leave my office work and I never felt so good in my life… I started doing a job online, for a company I discovered on-line, for several hrs /a day, and my income now is much bigger then it was on my last work… My payment for last month was for 9k… Awesome thing about this gig is that now i have more time with my family… CHILP.IT/13548ef

After 5 yrs I finally quit my previous job and that decision changed everything for me… I started freelancing online, for this company I discovered on-line, several hours a day, and I profit now much more than i did on my old job… My last month payment was for 9000 bucks… The best thing about this work is that i have more free time for my family… URLIN.IT/143f7e

Read through following article to understand how an individual mom was able to acquire $89,844/year in her extra time on her computer or laptop without selling anything>>> FL-Y.COM/3m1c

It’s been one year since I finally abandoned my previous job and that decision was a life changer for me… I started to work from comfort of my house, for this company I found on-line, several hours /a day, and my income now is much bigger then it was on my office job… My last month pay-check was for 9 thousand bucks… Amazing thing about this job is that i have more time with my family… CHILP.IT/728813e

After 5 yrs I finally abandoned my last job and it was a best decision i made in my life… I started to work at home, for this company I discovered on-line, few hours each day, and I profit now much more than i did on my last work… My last month check was for 9k dollars… The best thing about this work is that i have more free time for my family… CHILP.IT/728813e

After 5 years I quit my office work and that decision was a life changer for me… I started doing work from home, over a site I discovered over internet, few hrs each day, and I earn much more than i did on my old work… My check for last month was for 9k… The best thing about this work is the more time i got with my family… CHILP.IT/13548ef

After 5 years I left my previous job and i couldn’t be happier now… I started working over internet, for a company I stumbled upon over internet, several hrs a day, and I make much more than i did on my office work… Check i got for last month was for Nine thousand dollars… Amazing thing about it is that now i have more time for my family… TINY.PL/g9s36

I’ve made $84 ,000 so far these days working on the internet while I’m a full time college student . I’m taking advantage of a business online money making opportunity I found out about and after that I’ve generated this kind of decent money . It is really simple to use and I am just so satisfied that I discovered out about it . The capability within this is never ending . Here’s stuff that I do>>> SECURE02.WEEBLY.COM

I’ve earned $84 ,000 so far this holiday season working on the internet and I am only a full time student . I’m by making use of a web business marketing opportunity I discovered and additionally I’ve earned this kind of good money . It’s seriously user-friendly not to mention I am just very delightful that I found out about that . The potential within this is endless . Here’s everything I do, please have a look at my account>>>

I’ve made $84 ,000 right now soon working online while I’m a full time college student . I’m benefiting from a web business opportunity I heard of and additionally I’ve earned such type of great money . It’s really user friendly not to mention I am just too thankful that I discovered out about that . The possibility using this is end-less . Here’s everything that I do>>> FL-Y.COM/3kz0

I’ve generated $84 ,000 by far sometime this year working online however I am only a full time college student . I’m using a home based business project I found out about and I’ve earned such good money . It is actually seriously simple to use not to mention I’m just so glad that I found out about that . The possibility within this is endless . Here’s everything that I do>>> FL-Y.COM/3kz7

After leaving my office job twelve months ago, i’ve had luck to discover this great company on-line that literally saved me… They offer jobs for which people can do their work online from their comfort of their home . My last paycheck after working for them for four months was $10000… Great fact about the job is that the only thing required is basic typing skills and connection to the internet… FL-Y.COM/3kz9

I was paid 104 thousand dollars in last twelve months by freelancing on-line and I did that by wor­king in my own time for few h on daily basis. I used an earning model I was introduced by this web-site i found on-line and I am so happy that i was able to make so much money on the side. It’s very beginner-friendly and I’m so grateful that i discovered it. Check out what I did… http://9m­.­no/폩ᥤ

I was paid 104000 dollars previous year by working online from home a­n­d I was able to do it by work­ing part-time f­­o­­r few h each day. I used a business model I came across online and I am so amazed that i made such great money. It’s newbie-friendly a­­n­­d I am just so grateful that i discovered this. Here’s what I did… http://budget25­.­weebly­.­com

I got paid 104000 dollars in last twelve months by doing an on-line job a­­n­­d I was able to do it by working part time for 3+ h daily. I used work opportunity I was introduced by this web-site i found on-line and I am so excited that i was able to make so much money. It’s newbie-friendly and I’m just so happy that i found this. This is what i do… http://s­.­id/1cn

Actually a good milling machine is the preferred method to get quality results.

HOPE TO HEAR A RANGE REPORT ON THE FUNCTIONALITY