When I first spotted the DIAMONDBACK 380 at the range, I had to handle it. Wow! Talk about a pocket-pistol!

I had never heard of it and some subsequent research found the company on the WWW and a review by Jeff Quinn at Gun Blast plus many other informal reviews found on YouTube and various firearms-related sites.

Usually lagging behind in the review curve, I thought that I would throw my two-cents into the pot and share with you my impression of the “Diamondback with a Bite”.

As you can see in the picture, the DIAMONDBACK 380 lays in the palm of my mitt quite well. I normally do not like shooting guns where the barrel is shorter than my fingers. However, rule exceptions are part of life. My curiosity was running wild and I was not going to pass this opportunity up.

The version that I would be testing was the DIAMONDBACK DB380.

Picking up the pistol from the counter I dropped it in my shirt pocket, grabbed my target, donned my “ears”, and went into the range to my assigned firing lane. Lord, I thought! I have had cell phones bigger than this.

The Frame, Fit, and Finish:

The frame is of a slide Glass reinforced polymer material and is finished nicely. The Assembly Catch is the only control that exists on the frame aside from the magazine release button. Making sure that the pistol is safe and removing the magazine sets up the gun for take-down. Pulling the slide slightly to the rear and depressing both Assembly Catch serrations releases the slide from the frame. This is the same procedure as is used on quite a few striker-fired pistols.

The fit of the slide assembly to the frame is excellent. The finish on this particular is matte but the type is unknown but looks very closely like that used on Glock pistols.

The trigger’s pull weight on this particular model was right at six pounds (compared to the manufacturer’s spec of 5 pounds) and was smooth throughout the pull. The take-up was about 0.10 inches until feeling resistance. The pull distance from resistance-to-fire was about 0.40 inches. I could not detect a reset point. There is one quirk with this trigger and I will cover that in the Range Fire portion of this write-up. The trigger has dual connecting bars ensure a smooth pull.

The sides and front of the grip area are nicely stippled.

The magazine was of metal and held a low-friction magazine follower. Loading the magazine without assistance was easy; so easy that I felt like I was pushing a bullet through butter at room temperature until the last round where I felt some resistance. I felt no sharp edges and the base plate is of polymer with no “pinky Lip”. You can let the pinky stay off the gun or wrap it under the magazine.

A large dot adorns the fixed front sight and the drift-adjustable twin-dot rear sight provides the remaining sight alignment needs. The sights are easy to align. With this particular model, a green dot for the front sight and white dots adorn the rear sight.

The slide does not lock back on the last round and the double-recoil spring arrangement helps to soak up all of that mighty recoil generated in such a small pistol. The double-recoil spring arrangement also takes a little effort to pull back on the slide. The slide is nicely serrated front and rear to accommodate a safety check and to chamber a round for firing for the first time.

I hung the B-27(24) REV RC – 50-Yard target on the frame and moved it to my usual 7-yard line for testing. I was using Remington’s 95 grain MC round for this test and had no idea where the rounds might punch through on the target so I wanted to give myself as much space to play with as possible.

I was firing slow, two-handed, and unsupported, as this gun is just too small to bench rest. Most of all, I hoped that my aging eyes would pick up the sights and put them where they needed to be.

Aligning the sights for a 6 o’clock picture, I started to squeeze the trigger. Then, it seemed, as though I had hit a brick wall. The travel through the resistance just seemed to stop. I backed off the trigger and unloaded the weapon. Sliding an empty magazine into place, I attempted to dry-fire the weapon. At the very end of the pull, there was a tremendous amount of resistance. It took some effort to get past in order to release the striker. I did not detect this during the trigger pull test but, then again, I was using a trigger pull gage.

I re-loaded the magazine, slid it into place, pulled the slide back and let it go into battery. Refreshing my sight picture, I worked past the resistance and the first round struck the target low and left of center. I shifted the sight picture up until the dots lined up with the center of the X-ring. This time the second round went through the target almost centered but slightly left. Raising my sight to the top of the X-ring put the third round slightly above the 5X in the 5X circle but still slightly left. 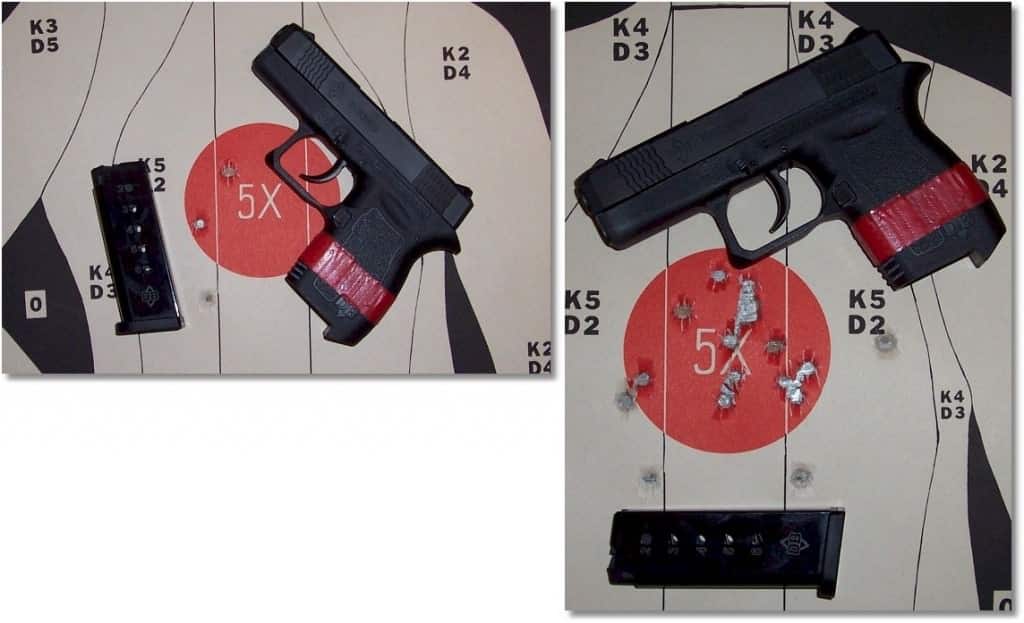 I loaded a fresh magazine now knowing about where to place the sights. Shooting left could be the sights or me but, since this was a range gun, I would just have to compensate.

The picture below right is the result of 18 rounds of fire with moving the sight picture slightly right and placing the dots at the top of the X-ring. Most went in the 5X with a few stragglers. The result is not bad for a gun this size!

Recoil is mild and muzzle flip easily controlled with the index finger of the support hand surrounding the trigger guard. Even with that, this gun has to firmly held and with authority – and, to me, there is not much to grip.

After twelve rounds fired, and even with me holding the front of the trigger guard, my trigger finger of the shooting hand took a beating. With pocket pistols of this nature, this is a common occurrence in my hands.

After the test was over, I ran two magazines fast-fired. The gun is quite capable of putting rounds where you need them to go and in a relatively confined space at short distances. A solid shooting platform is necessary and I would advise two-handed shooting. In other words, shoot it as if you mean it.

Summary:
While carrying this pocket pistol might invoke pathos in some toward those who carry it do not let its diminutive size deter you from pocketing this pistol in your favorite pants, vest, or shirt pocket (holstered, of course)

The Diamondback rattlesnake is both dangerous and deadly and the DIAMONDBACK 380 has the capability of making the user of this device just as dangerous and just as deadly to a threat. This small package can pack a punch with the best of them.

Diamondback Firearms also recently released the DB9, a micro-compact 9mm automatic pistol made entirely in the USA. I would like to get my hands on one for testing.

Shop for Trijicon Night Sights for DB380, a DB380 6RD BLACK FINGER EXTENSION MAGAZINE, and lasers and holsters at http://diamondbackfirearms.com