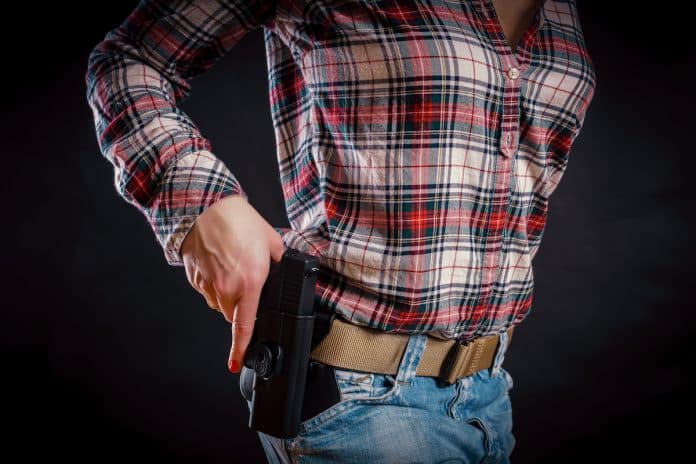 There is a good deal of misunderstanding regarding holster retention. Essentially, there are two forms of retention that holsters have: passive or active. Passive retention refers to the ability of the holster to hold the gun in place during activity, but the user needs only pull the gun from the holster with greater or lesser effort to draw it out. Activate retention demands an additional step performed before or while you draw the handgun from the holster in order to release the firearm. Active retention usually requires the push of a button with the thumb or finger to release the gun. Both forms of retention are important for different reasons and uses. Typically, however, a retention holster refers to the type that requires a specific action beyond just drawing the gun in order to release the handgun.

Do You Need a Holster with Active Retention?

So, do I need a retention holster? The answer to this depends on how you carry your gun and under what conditions. Most concealed carriers who carry a gun hidden under clothing do not use, and likely do not need a dedicated retention holster. Any good concealment holster, however, should provide adequate passive retention so that the gun rides securely in the holster and will not fall out under even vigorous activity.

Currently, almost all law enforcement officials that carry an open gun use a holster with active retention. There is a good reason for this. A large number of police officers that are killed on duty each year are actually murdered with their own sidearm. Police need to work in close proximity with problematic individuals on a daily basis. The likelihood of a disarm attempt is quite high for a police officer as the nature of their job is to often go hands on with suspects. There have also been many accounts of officers simply getting ambushed by someone who makes an unexpected and direct attempt to take the officer’s gun. For this reason, retention holsters are virtually standard for active duty law enforcement. The additional step needed to release the handgun from the holster, be it with a thumb push or some other button, often makes all the difference and it gives the officer time to react to the attack.

So, when and why would such gear apply to the citizen?

The most obvious role of the retention holster for the armed citizen, in my opinion, is for those that choose to openly carry their firearm. Many oppose the very notion of carrying a gun openly. I, personally, am not a fan of open carry as it gives away the element of surprise, which is a great asset of the concealed handgun. It also, arguably, brings attention to yourself and that attention may come from someone who means you harm. However, there are plenty of areas and circumstances in which open carry is perfectly reasonable. For example, it is not at all uncommon to find people in rural areas that have certain jobs that take them into the outdoors carrying openly. The population in such places usually thinks nothing of it.

When carrying a gun exposed on your hip, I firmly believe that using a holster with active retention is the wise thing to do. The fact that the gun is visible on your person means that anyone with malicious intent knows it is present. The tactical downside to open carry is that you lose the element of surprise and criminals can tell that you are armed. This can set you up for an ambush of any particular kind, but one sort of attack that is certainly much more likely when open carrying is a disarm attempt. For this reason, a holster with active retention makes good sense. The average criminal will likely not know how to immediately defeat the retention. It is also simply harder for an adversary to defeat the retention and draw the gun from the holster, even if they do know how to defeat the retention.

Beyond a criminal disarm attempt, a retention holster makes sense any time the gun is worn exposed. Curious children or thoughtless adults could simply grab at the gun causing a safety hazard. Another reason that retention holsters are a good idea is that an openly worn gun is simply more prone to coming upholstered than a concealed weapon. It is for this reason that I also believe in the use of a retention holster if you are open carrying a handgun while hiking, hunting, or doing any such vigorous outdoor activity. If you slip on a mossy rock and take a tumble, it is not out of the realm of possibility for your handgun to fall out of the holster. A retention holster will keep this from happening.

Drawing a handgun from a holster with active retention adds an additional step to the draw stroke and makes the draw more complicated. Practicing the draw from your chosen retention holster is in order. I personally have a preference for a retention system that uses the thumb to release the holster rather than one that relies on the trigger finger to do so. The need to depress a button on the side of the holster with the index finger while drawing the gun heightens the possibility of negligent discharge on the draw. Whatever system you utilize, be sure to practice with it and do so with an empty gun at first to ensure that you are able to safely draw the gun from the holster.

As a concealed carrier who always carries the handgun hidden under clothing you may have limited use for a holster with active retention. However, if you do occasionally open carry, or carry an open gun in the woods or field, a retention holster is a good investment.