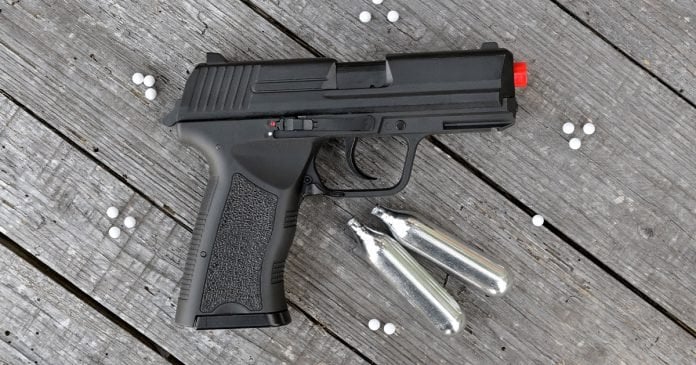 A few people have had the idea that an airsoft pistol, especially a blowback model simulating recoil, can be a useful “dry fire” training pistol. You get most of the live ammo experience without the expense, risk, or need to leave the house.

This is especially valuable if you don’t have the time to train regularly or if ammunition is in short supply. Sort of like right now!

But let’s take the next logical step. Instead of talking about it, let’s see it in action.

In the first of what will hopefully become an ongoing series, I will use an airsoft gun in “The Quest To Suck Less.” You get to see the results and make up your own mind about whether there’s something to it or not.

So, let’s start with the equipment.

What Airsoft Pistol Did I Buy? 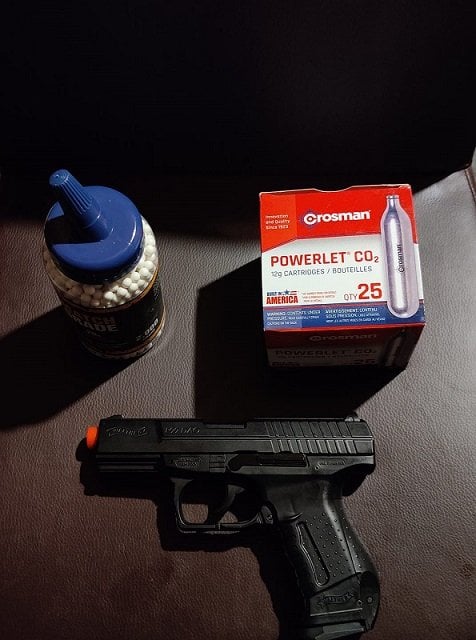 The airsoft pistol I purchased is an Umarex Walther P99 DAO. I bought a cheap Kydex holster for it (about $25 from Amazon) along with C02 cartridges and some plastic BBs.

To benefit from meaningful repetitions, you have to get a blowback model. That means getting an airsoft pistol with either a C02 system (you get the little Crosman cartridges) or a green gas system. Green gas is propane without mercaptan’s addition, the odorant added to propane to give it the telltale sulfurous smell.

As to ammunition, I live in a typical residential neighborhood, so using copper or steel BBs would be pretty stupid unless I had some vendetta against squirrels. Therefore, plastic 6.5mm BBs will be what I use.

Regarding apples to apples, the “gun” is incredibly close to the actual P99, identical in dimensions, and nearly identical in weight and trigger pull. You won’t appreciate this until you get your hands on an airsoft clone of a real pistol, but some are scary close.

As it happens, Umarex is actually Walther’s parent company, so it wouldn’t surprise me if the gun were made on the same tooling.

The recoil impulse is comparable. With a fresh CO2 cartridge, I’d say it’s about…70 to 80 percent of the recoil of an actual 9mm pistol of equal size and weight. Not 100 percent, but darn close.

For shot timing, I’m using the Splits app. While not as good as an actual shot timer, it’s close enough, the app is free (did I mention I’m cheap?), and I can take screenshots.

The drill I’m starting with is a simple 5 shots from the holster to give screenshots context.

The reasons are fairly simple. First, the magazine holds 15 BBs, so that means I get three reps per stick. Second, the standard routine I tend to shoot is the Wilson 5×5 drill.

The Wilson 5×5 has four courses of fire (5 freestyle, 5 stronghand only, shoot 5 then reload and repeat, then 4 to the body and 1 to the head) that are all done from the holster. It’s simple, but shooting it well requires good fundamentals.

Therefore, draw and shoot 5 (basically a Bill Drill minus one) is a good foundation exercise.

Like many people, the dearth of ammunition, lockdown, and so on prevented me from getting to the range as often, so my skills declined.

Again, the entire idea here is to see if there’s something you can do besides dry fire to sharpen and maintain shooting skills during an ammunition-scarce environment and/or fewer opportunities to go shoot.

The last time I actually went to the range, my first 5-shot string was about 4 seconds, with a 2.3-second draw time and split of almost 0.7 seconds. That’s…not…good. That stinks.

My first five-shot drill with the airsoft gun (mid-December) was about the same. Unfortunately, I didn’t grab a screenshot. However, after about a week of practicing about every other day, if not every day…this was the result. 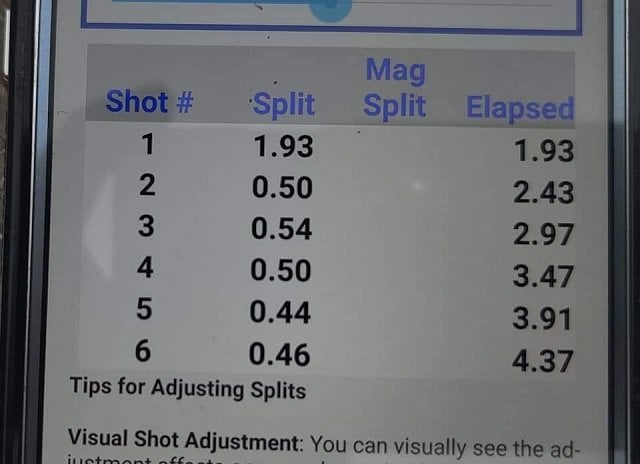 The sixth shot is when I hit the stop button on the app. More frequent practice…produced results.

That was a particularly good day. My first shot times are averaging 1.6 to 1.8 seconds most of the time, and my splits are getting down to 0.3 to 0.4 seconds, with a raw time typically about 2.8 seconds.

In other words, I’m improving, at least with the airsoft pistol.

But what about with an actual gun?

You’ll have to stay tuned to find out.

Again, the idea here is to test a hypothesis that an airsoft pistol and, by extension, airsoft guns with realistic function and design (copy of a real gun, with gas-powered blowback) are and can be used as a training tool to get better at shooting.

Maybe, some of you out there will see this and do the same and get similar or maybe even better results.

Think I’m insane? Think I’m onto something? Just have something you want to gripe about? Sound off in the comments.

There’s a YT video where T.Rex invited a Japanese kid over to teh US to see how well he shot; the kid had been training for 3 years with Airsoft but had never shot a real gun. It’s really impressive.

I have been using a Remington CO2 BB 1911, metal with blowback for several years. It allows for practice in the backyard or garage in foul weather. The weight is much less that my other 1911s so I added a 1lb wrist weight to approximate the feel. The recoil is a lot lighter that the .45, maybe half or the 9mm and just a tad lighter than the 22TCM (awesome little puppy with fire). One nice thing is it fits the same holster as my EDC but cost about three cents to pull the trigger and that includes the cost of the pistol. I have several others which are close to the actual guns, but the blowback in metal is better for feel. Most do shoot steel BBs, a couple shoot the plastic ones.

For inside the garage or basement, a couple of moving blankets can be hung behind a large plastic tub or moving box. Put a piece of carpet in the tub and and cut a hole in the lid for the target to get taped over. A couple saw horses or card table can be used to get the height. Nice because this also catches the BBs.

It doesn’t replace live fire but it is inexpensive and can still give you the reps from the holster and you can get off the ‘X’ as you draw, which many ranges will not allow.

Do they make a Glock airsoft pistol?