Buckshot is obviously the default defensive loading for a shotgun, and preferably either 00 or 000 buck, but what are you supposed to do if you can’t find any? The ammunition shortage has eased a bit, but there are still rolling shortages even with online retailers, so it’s a good idea to have a backup in case you need to keep your scattergun topped up.

NOT BIRDSHOT. Ever. Just…don’t.

I trust #4 Kent (or Super-X if I can’t find it) to kill turkeys, heavy #2 for waterfowl, and #6 for grouse or pheasants, but I wouldn’t use any of it for personal defense unless I literally had no other choice. However, I do, and so do you, so just don’t use birdshot of any sort.

What are some good alternatives?

The most obvious choice if buckshot is not available is to switch to a slug. The type to acquire is a Foster slug, which is a dome-shaped projectile typically with a depression in the cone. Foster-type slugs typically have spiral-cut grooves on the side of the projectile, which are meant to engage rifling as the typical use is to shoot them through a rifled 12-gauge barrel for hunting.

While normally used more for hunting applications (again, with a rifled barrel), a Foster slug will still fly straight at home defense distances.

Everyone knows to get 00 or 000 buckshot, as mentioned, as it is, has been and probably always will be. However, IF you find that 00 or 000 aren’t available, smaller buckshot is a serviceable alternative.

There are far fewer loads of #1 buck or #4 buck on the market than 00, but they are out there.

If you find it on store shelves or online when 00 or 000 isn’t available, #1 or #4 buck can be effective as it’s heavy enough to get sufficient penetration to disable a hostile human target. Granted, the pattern opens up faster and wider than 00 or 000, so the maximum range you’ll want to use it at will be shorter, but – again – if you can’t get 00 or 000, a smaller buckshot still works.

#2 and #3 buckshot technically do exist, but hardly any ammunition manufacturers make it, so you aren’t likely to find it. However, #1 and #4 remain in product though, again, in much lower volume than 00 or 000.

Shotgun sabot rounds are a type of slug, usually, a large-bore hollow point (.45 caliber or larger) set inside a shotgun shell. Sabot slugs, just like Foster and Brenneke slugs, are typically meant for use with a rifled barrel for hunting in straight-wall or shotgun-only jurisdictions. Essentially take everything about Foster slugs and apply it.

Similarly, the trajectory will still be predictable and straight enough at home defense distances to be viable. Is it a best practice? Probably not. Will it work at home defense distances if it’s what you can get? Yes, and that’s the idea. If we here were concerned with shotgun hunting, then you’d want to get a rifled barrel for best results, and when used in a rifled shotgun barrel, sabot slugs are effective to at least 100 yards if not to 200 yards with an optic and a competent shooter with some loads. 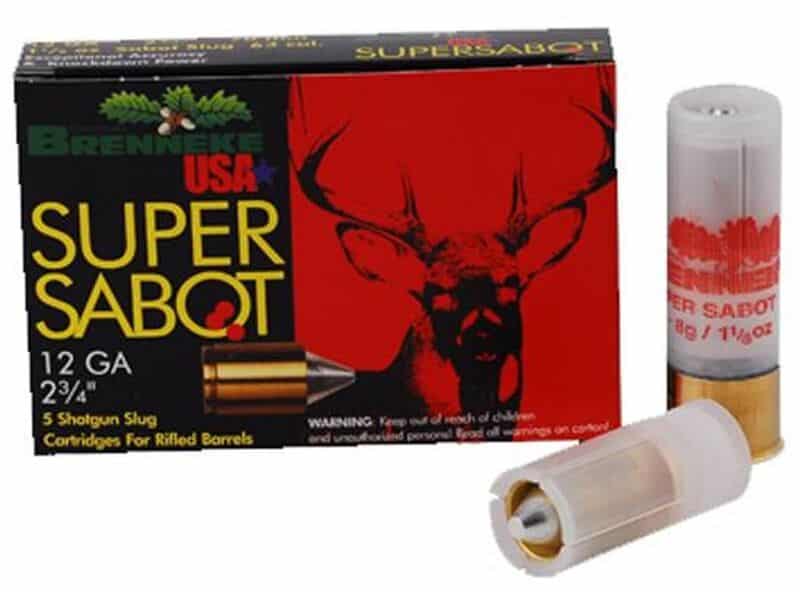 Bear in mind that rubber slugs are not as effective at stopping hostile human targets as actual slugs or buckshot, and there is no non-lethal alternative that is as reliably effective at stopping hostile persons. If you wanted to consider less-lethal projectiles, get a rubber slug rather than rubber buckshot. Bear in mind also that they won’t cycle a semi-auto, as they don’t generate sufficient recoil or inertia to cycle the action.

And don’t believe anything you might hear about “non-lethal” ammunition. The use of a firearm in a defensive capacity is only for the gravest extreme when no other alternatives exist. “But your honor, it was a rubber bullet,” isn’t going to fly in court.

What a rubber slug does is deliver blunt force trauma without penetration, typically on the order of a couple of hundred foot-pounds. Fatalities have occurred with headshots, and police officers are typically trained to aim for soft tissue instead of the head or sternum. They’ll cause pain, but the question is if it’s enough to be disabling. And it’s just not guaranteed that they will.

However, if you absolutely had to…it’s better than nothing.