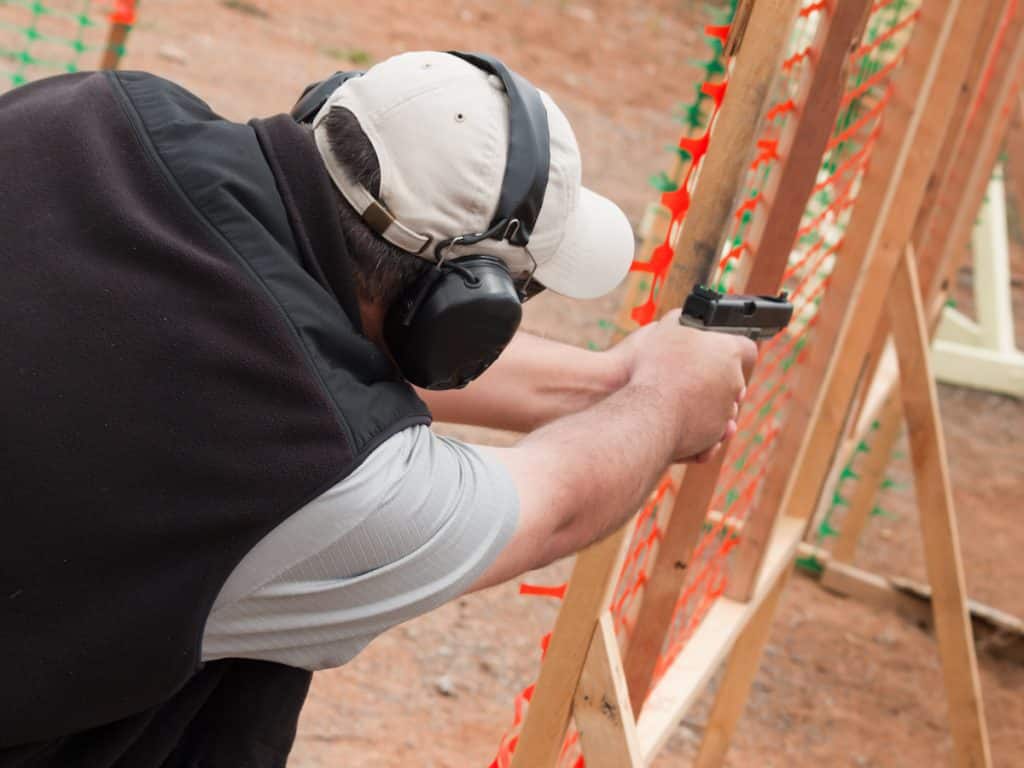 I write this a day after shooting the first IDPA match I have shot in about six months. I did not do as well as I hoped. I won my division of CCP (Compact Carry Pistol) and technically you only “compete” within your division in the shooting sports, but I try for top place at club level matches. Oh well. Of course, I noticed something that disturbed me, a trend I notice at every match I have ever shot: I am one of the very few shooters using a “realistic” carry setup. I shot the match with my Glock 26 in an inside-the-waistband holster, with a t-shirt covering it, just like I wear when in public this time of year. I go to a match wearing the same gear that I go to the supermarket with. Most of the guys at the match were using long slide competition guns covered with the typical IDPA vests. When leaving the match most of them removed the big gun, the vest, and put a diminutive pistol in their pocket. Thus, the average competition shooter trains and competes with gear that has absolutely no application to his defensive plan.

I find that most handgunners tend to fall primarily in one hemisphere or another: “competitive” or “tactical.” There are those that focus primarily on competition shooting and those that train primarily for defensive applications. Many on the “tactical” side of the fence claim that competition can build bad habits that will get you “killed in a streets.” Many on the competitive side laugh off defensive purists as a group who simply avoid competition because they don’t want to come to terms with their mediocre level of shooting. I believe the two disciplines do complement each other and a dedicated shooter should embrace both worlds, at least to some extent. The intention of this article is to address what I consider to be the true benefits of competition for the shooter primarily concerned with self-defense training. However, to really reap these benefits you need to approach competition differently than dedicated competitors.

There are essentially four reasons why I think all self-defense oriented shooters should compete.

I see new competitors at every single match inadvertently drop magazines, miss safeties, miss slide-stops, and induce malfunctions, only to say “that has never happened with this gun before.” That is because these individuals have never shot the gun under any sort of stress before. Shooting a competition match induces stress on the shooter, and it is beneficial stress. Any problems with technique or gear will be exposed in competition, so shoot some matches.

If you are a self-defense oriented shooter you need to approach competition the right way to use it as a practice tool rather than just playing for the sake of the game. To begin, use your actual carry gun in the actual carry mode that you use every day. This, in itself, is certainly a challenge for many folks, depending on how you carry your gun. For example, many forms of competition do not allow appendix carry and really none allow ankle or pocket carry. USPSA does allow appendix carry in some divisions, so this may be an option worth seeking out if you carry using this increasingly popular mode and are not allowed to do so at your IDPA club, since at the time of this writing appendix carry is not allowed in IDPA. You may find you need to compromise in some regard, but stay as close as possible to your real carry setup.

If you compete with a large competition gun in an outside-the-waistband holster when you really carry a small single stack 9mm inside-the-waistband, you are obviously wasting the valuable opportunity that the match presents. Therefore, if you get into competition shooting and enjoy it you will probably come to a point where you need to decide between using your real carry gear to get beneficial practice out of the match, or, switching to competitive gear to be a good competitor. I have no problem with competitive shooters maximizing their advantage with the right gear for the job, but for the shooter primarily devoted to self-defense this is the wrong path. Shoot the match with the gun you actually carry, from the carry mode you actually use, if possible. Are you going to be the top dog at the match if using realistic carry gear? Most likely not. But, ask yourself, what are your priorities?

So, if you have never done competition and you are thinking about it, you will have to consider which game you want to play. There is an endless debate between USPSA/IPSC and IDPA. Let me make it really easy for you: they are all only games. They are not gunfighting. However, they are all games that will dramatically hone your shooting and gun handling skills. You may hear many IDPA shooters claim that their sport is “Realistic.” No. It is a game. However, there are a number of elements in IDPA that are arguably more realistic than USPSA or IPSC. For example, most reloading in IDPA is done from slide lock. Also, there is the use of cover, to at least some extent, in IDPA. Obviously, there is also the use of a concealment garment in IDPA, although the gamers do not use realistic concealment, as discussed above. But, IDPA is still just a shooting game and USPSA or IPSC are also greatly beneficial if practiced the right way.

Personally, I like IDPA simply because I can be at least a bit more competitive with my real carry gear than I can be in USPSA, and I also like the fact that IDPA requires shorter courses of fire. You only need two spare magazines in IDPA for any division, and most stages will have just a single reload. In USPSA it is not uncommon to need four or five reloads in a stage. I don’t know many folks that carry five reloads, so here IDPA is a bit more realistic if you want to compete with your real carry gear. I find USPSA more appealing strictly as a game, however, but in the context of a training supplement I think IDPA is a good option to get started with for those of you looking to take the plunge into competition. If you have not yet dabbled in competitive shooting I highly recommend getting involved. I only shoot a few matches a year but I consider it a great addition to my yearly training and I think you will agree if you try it.

AR15s and Home Defense: Some Thoughts

AR15s and Home Defense: Some Thoughts