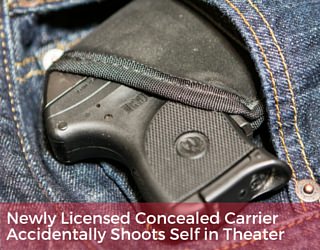 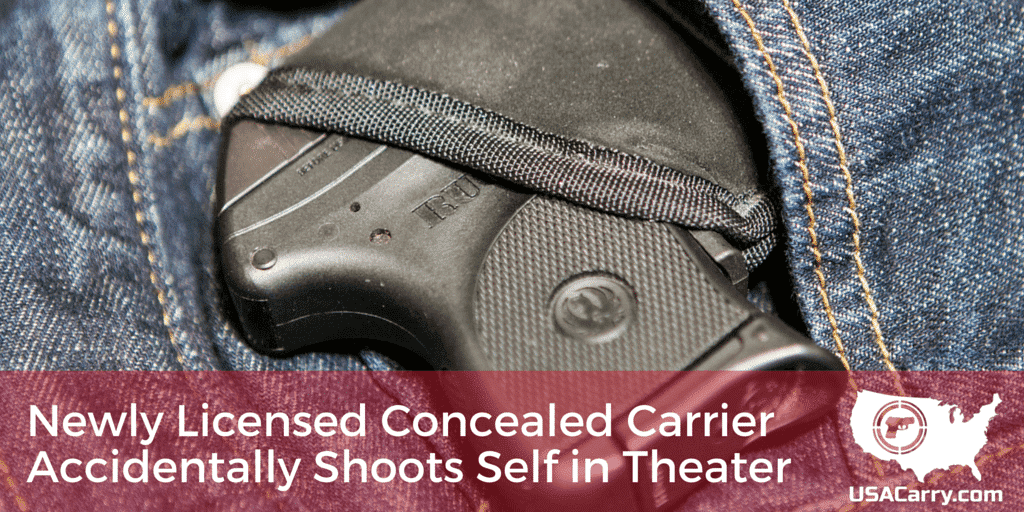 A shooting in a Salina, Kansas movie theater is under police investigation.  A man who had recently received a concealed carry license accidentally shot himself while watching a film.  No one else was injured.

The negligent discharged took place roughly 30 minutes into the show. Theater staff subsequently evacuated the audience, who remained calm during the incident.

The bullet struck the man in his inner thigh, rupturing an artery.  While it took 15 minutes for first responders to arrive at the scene, another audience member administered first aid to the wounded. Tim Coleman, a military veteran who served three tours in Iraq who also has a concealed carry permit, credits his Army training for his response:

“That’s what they teach you: just stop the bleeding. That’s what I was trying to do. As I was tying on his tourniquet I told him that this was going to be painful and that he was going to have to bite down and deal with the pain.”

Coleman also worked to keep the man calm, instructing him to slow his breathing and thus limit blood loss. Another audience member helped secure and unload the firearm. Coleman tentatively identified the firearm as a M&P compact.  The injured man had apparently stuck the weapon into his pocket in lieu of using a holster. This is why it is always important to carry concealed with a proper holster. USA Carry never recommends carrying without a holster.

Police treated the incident as a medical emergency, rather than an active shooter situation.  This incident follows a change in Kansas law regarding concealed carry. As of July 1st, Kansans joined the shortlist of states that allows Constitutional Carry.

Still the facts speak for themselves.

So I went to the VA Hospital for a spinal column problem, they took my blood (fasting) to check my kidneys, then told me my bad cholesterol is high and they prescribe drugs for that problem.

Stuck a compact in his pocket instead of a holder. Yup, he’s stupid.

Why is it important to carry in a holster? Well, those compacts typically don’t have a safety. They’re pull and fire. If you’re in a situation where you need to defend yourself, you don’t want to be messing with a safety anyway. The holster is designed to guard the trigger, so it won’t go off unexpectedly. Jamming it into your pocket, not so much.

I agree that you don’t want to be messing with a safety in a self-defense emergency., One reason I prefer the Springfield XD series is that they have both a trigger and a grip safety. The trigger safety would greatly reduce (not eliminate) the chance that the firearm will be discharged by bumping the edge of the trigger against the side of a theater seat, for example. And the grip (backstrap) safety virtually eliminates that chance because it requires both safeties to be compressed simultaneously–a highly unlikely occurrence even while adjusting for comfort in an unprotected pocket carry. Most accidental discharges are from something getting caught in the trigger–either while reholstering or through the side of a soft holster. Other than that, in any shooting situation, a normal hand grip and trigger pull makes the Springfield XD go bang–every time. No need to worry about either safety–they will be pressed and in the “hot” position. I have friends who, with disdainful macho bravado, contemptuously declaim that a disciplined trigger finger is the only safety you need. Good luck with that when the drawstring on your windbreaker–not your trigger finger–slips in front of the trigger while reholstering your safety-free pistol. Actual occurrence of such incidents have been caught on video (search youtube) and you can add this theater event to the “Plaxico Burress” file of unintentional discharges by macho guys sporting “no safety” pistols. Fortunately, unlike Mr. Burress, the self-inflicted gunshot wound in this article was not incurred during the commission of a felony gun law violation.

This is something really interesting that is worth paying your attention right now,a superb online opportunity to work for those people who want to use their free time so that they can make some extra money using their computers… I have been working on this for last two and half years and I am earning 60-90 dollar/ hour … In the past week I have earned 13,70 dollars for almost 20 hours sitting ….

Specific qualification, degree or skills is not necessary for this, just keyboard typing and a good working and reliable internet connection ….

Any Time limitations or boundations to start work is not required … You may do this work at any time when you willing to do it ….

Anyone can understand that making good money is extremely important, so I want to Tell you you so that you can make your life easier and achive financial freedom.It’s about a project that is giving me $10 k or more every month by doing simple tasks that anyone with basic computer skills can do and you need only good internet connection.This is the best project I have ever worked in my life you will like it.

This is also a good example of the not very safe pistols such as Glocks and other striker fired pistols. They do not have safeties. Would you carry a 19911 locked and cocked without the safety being on? I don’t think so. The millisecond saved by not having a safety is stupid.

He was carrying without a holster.