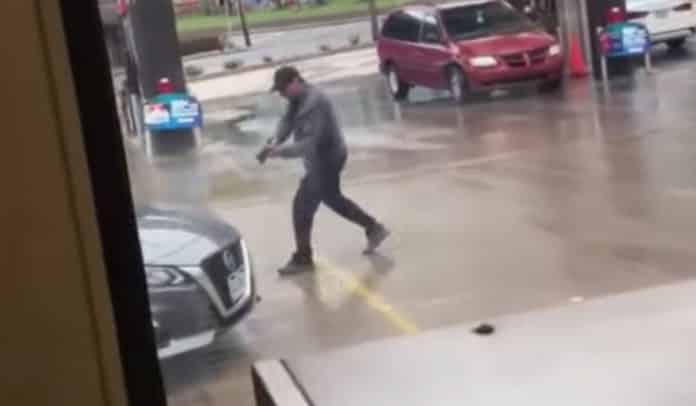 Last Saturday, two men got into an altercation over one of them coughing in a Johnstown, PA convenience store parking lot without covering his mouth. It started when one man told another to cover his mouth when he coughed as he was walking across the parking lot.

The cough-er then pulls a gun and fires a round through the windshield into the dash of the car. As the complainer tries to leave, he fires several more rounds into the left front tire. The shooter did not have a carry permit.

According to Local 12 News, both men were charged with aggravated assault and reckless endangerment. I suspect the shooter will get the worst of this deal though neither could make bail so they’ll both have plenty of time to think about their actions.

This is a great example of the dangers of not minding your own business and how to not de-escalate a situation. The complainer could have just driven away as soon as he saw the cough-er coming towards him and he certainly didn’t need to get out of the car to further the confrontation. The video clearly shows the driver trying to back away as shots were being fired into or at his tire.

While being hit with a vehicle certainly can be considered a deadly force attack, firing at the tire to apparently try to stop him from leaving is not going to look like self-defense to a prosecutor.

The driver made it to his home where he called 911. The cough-er inexplicably still had his gun in his hand as officers arrived but fortunately dropped it when he was ordered to. Smart move but a smarter one would have been to ignore the other man or at least not turn around to approach him and escalate the situation.