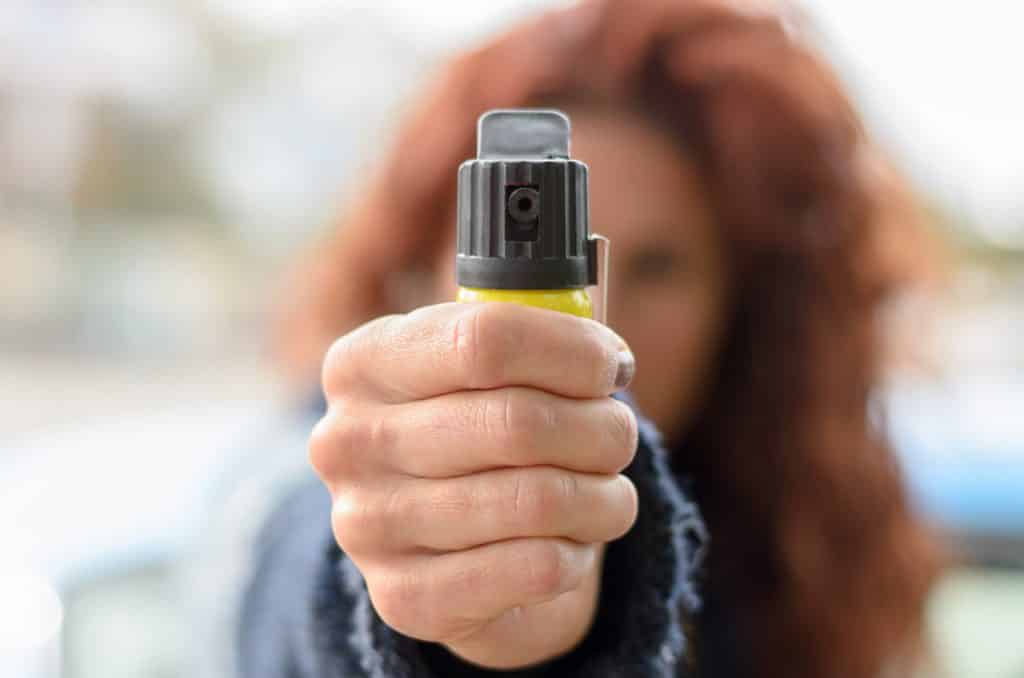 Roughly 80% of criminal assaults each year are deemed non-lethal in nature. What this essentially means is that if an assault is committed by an individual using only hands or feet most often, it is considered non-lethal. Not always, however. In the eyes of the justice system, there is usually no reasonable basis to believe death or grave bodily harm will result between relatively equal combatants in a physical altercation. This gets complicated really fast, as you might imagine when the disparity of force comes into play.

Disparity of force is the element that comes in when a deadly weapon is used in self defense against the ostensibly unarmed attacker. – Massad Ayoob

The idea that an attacker must be armed to pose a lethal threat, of course, is not at all true. An unarmed attacker can kill you if he hits you hard enough, strangles you, or gets you in a “position of disadvantage.” For example, if an adversary jumps on top of you when you are on the ground and bashes your head into the curb, this is a lethal assault even though the attacker is unarmed. Basically, as armed citizens, we have the option to escalate to lethal force to defend ourselves, but in the majority of assaults that transpire, going to the gun would be deemed excessive force.

Things get more complicated when we factor in the different capabilities of different defenders. Myself, for example, being a small but fairly strong male would fall under a different set of expectations than a 110-pound female. A non-lethal assault against me, one in which I would be expected to deal in a less-lethal manner, may indeed pose grave bodily harm to a small female. Thus we broach the ever-present concept of disparity of force.

Under such dynamic circumstances as a physical assault, we need to make split-second decisions and determine how to respond. We need to evaluate the nature of the threat we face instantly. This will be different for everyone. An elderly man has a different set of parameters for what poses a reasonable threat of death or grave bodily harm than does a 30-year-old MMA competitor. So first priority: we all must assess our own abilities and think about these criteria beforehand.

One example: for an average size male, I can tell you that an angry unarmed drunk in a parking lot who shoves you would usually not warrant a lethal response. You should simply get away from him if you can, and if you can’t, then give him a face full of OC spray (a less-lethal option ideal for such circumstances). If he presses it further, then you would need to go to hands or an impact weapon, using only the necessary force to end hostilities. However, what if said drunk is big and powerful and after getting sprayed with OC becomes enraged and pins you to a wall and starts punching you so that your head is taking the impact from his fist as well as the wall? This very well may now warrant a lethal response such as blade or gunfire. Therefore, a single assault can change in nature very quickly. We need to know the law, know ourselves, and be able to change gears instantly, and this skill requires training and significant self-evaluation.

A female facing the same aforementioned drunk may have a completely different set of criteria governing how she would respond. A drunk that makes unwarranted advances and attempts to “touch” is a candidate for OC Spray, or a good whack with a kubaton, or a knee to the groin. However, if the drunk attempts to force himself on the female, or tries to control her physically, we are now looking at a situation in which grave bodily harm (sexual assault is always deemed as such) is imminent, and gunfire may be completely justified. The disparity of force at play may justify the use of deadly force for the female defender. But a robust male would be obligated to use only less-lethal defense unless the fight was to progress to a reasonable fear of grave bodily harm, such as in the pinned-against-wall example above.

So how do we go about preparing for such a wide assortment of potential threats? I have four general considerations to give thought to now before an actual force encounter unfolds:

Know your own capabilities.

Know what constitutes a deadly threat, know what makes it imminent, and know your obligations as a defender.

I think this is important for everyone, including young and strong males. An option like pepper spray can often prevent things from going to hands, which is always dangerous for everyone involved. It can give a female the ability to quell an issue, like an aggressive drunk getting physical, before needing to resort to lethal force, and it can give a powerful male defender an alternative to hands-on self-defense. It can fail, of course, so be ready for plan B.

Know what constitutes a change in the nature of the assault and be ready to escalate to the appropriate force needed to defend yourself.

The final thing I will say about less-lethal tools like OC spray is there has long been a legal myth that still hangs on in which people think that carrying spray means you are obligated to use it. Remember that if facing an imminent deadly threat, you can resort directly to lethal force, which would be appropriate. You don’t have to use your spray just because you have it against a guy rushing you with a knife or pointing a gun at you.

The second myth that hangs on is the notion that a prosecutor could say, “why did you not just use pepper spray.” While that is possible, as many prosecutors are less than ethical, a good defense team can easily argue this by explaining deadly force is appropriate in defense against a deadly threat. I would also argue that if you use a less-lethal option on a less-lethal threat that then morphs into a lethal threat, the fact that the attacker pressed the assault even after being sprayed will set you up to be able to even more clearly articulate a subsequent need for lethal force.

Get yourself squared away with knowledge of your own abilities, knowledge of the law, and carry a less-lethal option along with your lethal weaponry. Stay ready for all contingencies.

Never trust someone with one name.

What if they only have one letter?

Pepper spray can have issues. State v Ovechka 2009 in a very lengthy explanation,
they noted that the majority of jurisdiction have in recent years found
mace or pepper spray to be dangerous or deadly weapons capable of
infliction great bodily harm (GBH). People do not understand
that ordinary force has different levels of force. Because peppers
spray can cause GBH and at least one death you can get charged with an
enhanced charged of aggravated assault, Ovechka got 2nd degree assult.
Proportional force does and will consider gender. The law in general
will recognize that a female has weaker upper body strength of a male
and may have a large weight disadvantage. a 110 lbs 5’2″ female will
have physical disadvantage over a 230lbs 6’4″ male allowing more readily
the use of pepper spray because the disparity of force. Training is a
consideration, in the previous male female description, lets say the
male peppered sprayed the female. During the investigation it was
learned that the female was a MMA fighter. That training was irrelevant
because the male did not know this fact. Now change it up, now the
male had personal and document evidence that he knew the female was a
MMA fighter. This becomes his reasonable person standard. Now he had a
legitimate use of pepper spray. Because of proportional force and
because pepper spray can rise to GBH on a case per case basis, unless
there is a clear disparity of force or a position of disadvantage men by
definition has less events or situations than women to use pepper
spray.

That can be a sticky wicket. Sometimes you only have seconds to make a determination, but I do agree most incidents do not require the use of deadly force. HOWEVER, it only takes those few seconds for a situation to escalate to a potentially fatal assault. When that time were to come, would the victim still be able to, either physically or mentally be cognizant enough to make that determination? That is definitely a call for more training. The idea is to become situationally aware and always take the extra pains to avoid that potential, whether it’s staying away from “that” side of town, or avoiding the darkened area or suspicious groups of people. It’s planning for a trip or an outing, asking questions before venturing to unknown or unfamiliar places. Unfortunately, the inexperienced may have difficulty determining a proper plan, or what to look for. Pepper spray is on my “bat belt”, along with a multi-tool, bright flashlight, extra mags, gun. I have a knife clipped in my pocket, a small blade in my watch pocket. Almost all of these items can be used defensively before I resort to pulling my gun, but making the determination to advance to deadly force is a much more difficult decision. I really don’t know what the answer is. Each case is going to be different for each person. However, it’s up to the armed individual to gain the knowledge and training to find out and be as prepared as possible.

and a smart cop knows how to de-escalate a situation. There have been situations where people have been shot and killed by cops that were threatening suicide (sometimes no with a gun) and the cops made it much worse.