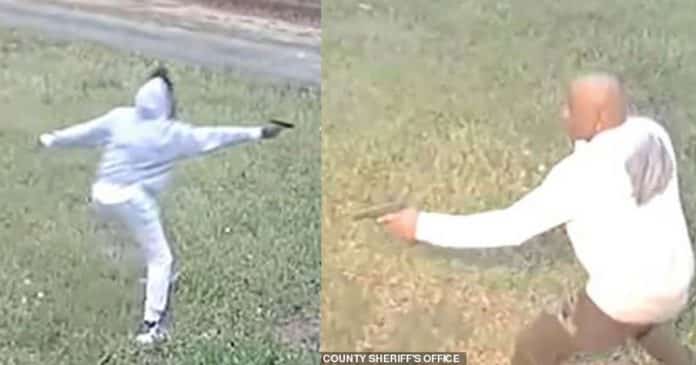 The residents of Newnan, GA experienced some excitement on a recent Friday night when they witnessed a gunfight between a father and son in the front yard of one of their neighbors.

It started when the father caught his 26-year-old son with a gun and asked him to hand it over to him. The son refused and instead pointed it at his father which caused him to get his own gun from his bedroom.

Who fired the first shot is unclear but the security video shows both men briefly outside the home apparently aiming at each other. The father then runs back toward the house and the son can be seen aiming at his father. The son is then seen moving about the yard and driveway apparently dodging shots from his father. At one point the son moves toward a car parked in the driveway and takes cover. Somehow, no one was injured in the exchange.

The father called 911 and the son was arrested and charged with aggravated assault and possession of a firearm during the commission of a crime. The father was not arrested as he was seen as defending himself. Three bullet holes were found in the exterior of the home.

It is so fortunate that this ended with no one hurt. Hard to imagine having to defend yourself against one of your own children but a deadly force threat is what it is no matter who’s bringing it. Perhaps the father missed intentionally and just fired to keep the son at bay and out of the home. Couldn’t possibly imagine actually trying to place rounds on one of my own. Hopefully, this family can get some help now that the son is facing charges.