Analog TV to die! THE SKY IS FALLING!!

The House has refused to delay the switchover from analog to digital TV.

Senators, worried about the static they'll see when the plug is pulled on analog television broadcasts in the United States, had approved the emergency measure Monday and rushed it to the House floor for a vote Tuesday afternoon. But representatives put off the vote until Wednesday.

Two members of the Federal Communications Commission sent a letter to Rockefeller and Rep. Henry Waxman, chairman of the House Energy and Commerce Committee, this month "to express our deep concern" that the country is "nowhere near" ready for the signal switch.

Commissioners Michael Copps and Jonathan Adelstein called for a delay to give the government more time to get "boots on the ground" to help with the transition.
Click to expand...

Ok, so...call me insensitive or whatever. but what's the big deal? Is TV really THAT essential of a service that we need to make a big deal about potentially - GASP - not having it for a little while? As far as I know, everyone who's interested in watching TV either has cable or satellite, or steals satellite for free. And of course, you can watch most TV shows on the internet now anyway.

If you really have to have it, Instructables has a great tutorial on how to make your own digital TV antenna out of a few scraps. It probably works better than whatever you'll pay out the nose for at the store.

Good, I heard about them trying to extend the date last night. If people don't know about the change by now something is wrong. This has been years in the making and there is no need to delay any longer.
W

But we NEED government control of TV!!! If we rely on the marketplace to get this done, we might learn that government influence is counter-productive.

I don't need the government controlling "Every Day Italian"

Yup, as does Emeril! 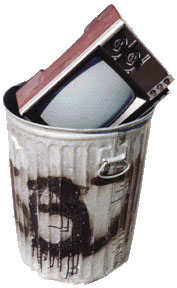 :dance3:
Boy some days I think that hits it right on the head.

The govmint needs to keep their cotton-pickin' hands off Paula Deen, y'all.
S

Well this is a duh factor here....:mamba:

TV is how they brainwashed the ignorant poor into voting Democrat:hang2:

No TV for the poor = no Democratic votes, which brings me too they should have shut the things down last April then we might have had a more informed election.:butcher:

As long as I don't lose The Three Stooges Sunday mornings!

This is kind of a pet peeve of mine, maybe because I'm a teckie. But, now that there has been a reprieve till June on the switch, I am wondering why people are still not ready for this cut-over. It has been more than 3 years since this change was announced, and since then HD flat-screen TVs have been flying off the shelves. I didn't jump on the bandwagon and buy one of the first sets (I just bought a 52" LG for $1700 that would have cost $20,000 back then). But HD has been available for a L-O-N-G time, along with the converters that will be needed if you still live with an antenna system. There is no change if you're on cable or satellite.

The only real concern is with emergency battery-operated TV sets which will not work after the fact.

So why now is it that people are still not ready for the switch? It's like waiting until midnight on April 15th to file your tax return...if you ain't ready now, why not? It's gonna happen, so get rid of that old Magnavox 26" console with the AM/FM and turntable and get a REAL TV. You know you want to!
S

Piece Corps said:
The only real concern is with emergency battery-operated TV sets which will not work after the fact.
Click to expand...

some of the cheaper converters like the ones at ABC are battery powered, all you have to do is to hook it up to a antenna then put a 1/2 wave dipole ( easy to make) on the antenna out jack and it will transmit a low powered signal that could be received by any analog TV in your house. So all you would have to do is to tune your emergency TV to channel 3 or 4 depending on which you set the converter output to. BTY U can do that with any of the converters not just the battery powered one.

wolfhunter said:
But we NEED government control of TV!!! If we rely on the marketplace to get this done, we might learn that government influence is counter-productive.
Click to expand...