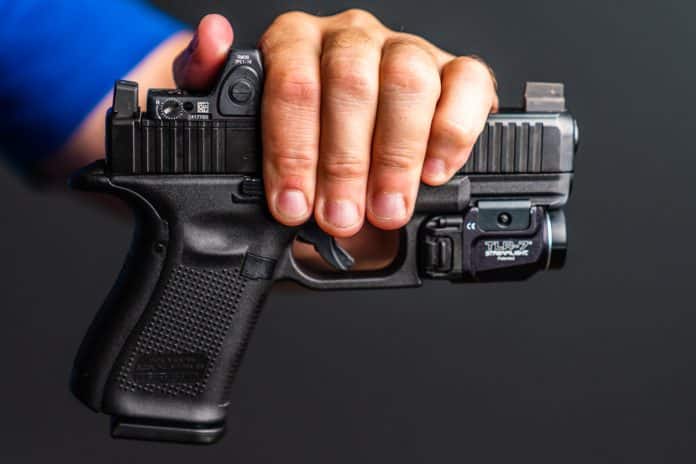 A task that happens quite frequently at the range is the handing of a loaded firearm from one person to another. This task is rarely discussed in the community and is rather taken for granted. This process can prove dangerous, and there have been quite a few negligent discharges involved in such. When handing a loaded gun to another person, there are inherent safety risks, and the process must be done correctly to ensure safety. If you are teaching a new shooter at the range, this will certainly be a consideration, or even if you are shooting with other shooting buddies. How do we safely transmit the firearm to another person?

First, How Do You Switch Hands Yourself?

Consider the ability to transfer a loaded handgun from your dominant hand to your support hand, and vice versa. This is a critical self-defense skill, as being able to switch hands safely is important. However, being able to switch hands is also important when you prepare to hand the gun to someone else. While we do this procedure, it is imperative that we keep the gun pointed safely downrange at all times. It is also important to keep the trigger finger from either hand safely outside of the trigger guard. 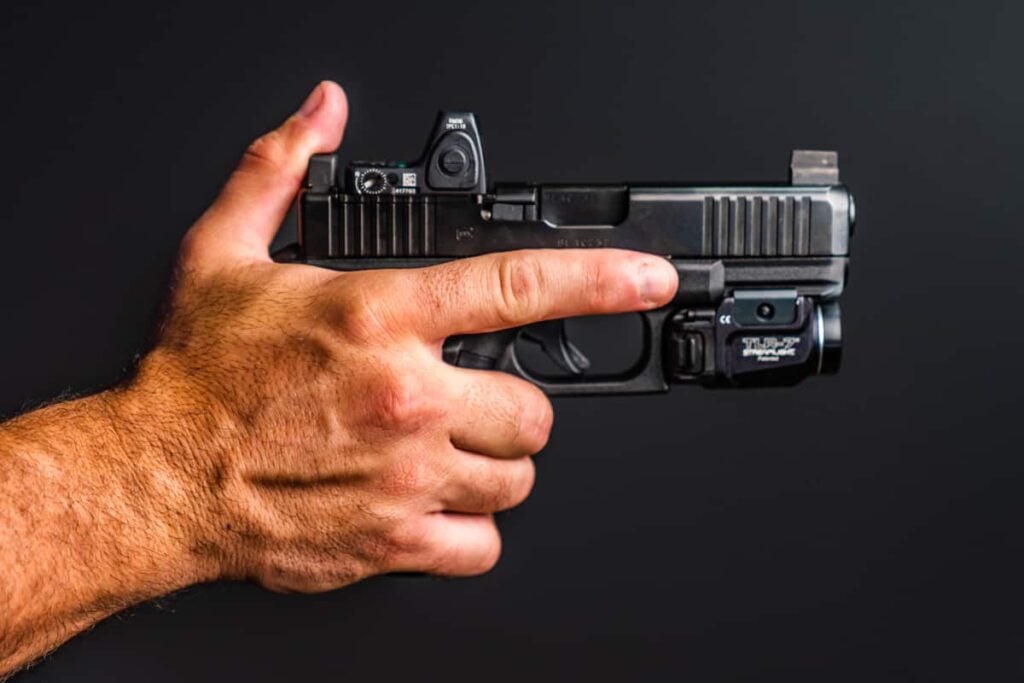 After administratively drawing the gun, or loading it, to switch the handgun to the other hand safely, place the thumb of the hand holding the gun along the back strap and butt of the slide, so that the thumb will not get trapped by the second hand that will be receiving the gun. The trigger finger should remain high up along the slide to ensure that it does not touch the trigger. Likewise, the hand that is taking the gun should clasp with the hand that is currently holding it, finger along the frame. After switching hands form a proper grip on the gun by bringing the thumb over to the correct side of the grip frame. All of this should be done, of course, with the gun pointed downrange, in a safe direction.

Handing the Gun to Another Shooter

Often you may find that you load the gun for a brand new shooter that you have on the line. Safely transferring the gun to that person is a process that should not be rushed, or taken for granted. To do it safely you must ensure that you remain safe, the shooter remains safe, and anyone else in the vicinity does not get flagged by the muzzle. With the shooter standing and ready on the line, facing downrange, you can place the loaded gun in their hand while you maintain a safe downrange direction with the muzzle. There are two general ways in which you can hand the other person the gun:

Method 1: Gripping Over the Slide

First, you can place your hand over the top of the slide. Be sure that your fingers are clear of the trigger guard. Also, make sure the muzzle protrudes far enough that it is not pointing at your hand. With the gun in this position, pointed down range or in a safe direction, the other individual can grasp the gun with a proper grip. Be sure that when you release the gun, your hand does not drift in front of it.

Also, be sure that you are behind the person that you are handing the gun to when doing this. If a new shooter is standing on the line, facing downrange, be directly at the strong side of the individual, and slightly behind them. When they take the gun from you, the muzzle should never drift from the safe downrange position. This grip over the slide also proves a good way to take the gun back from the new shooter. It allows them to keep the muzzle properly oriented downrange. 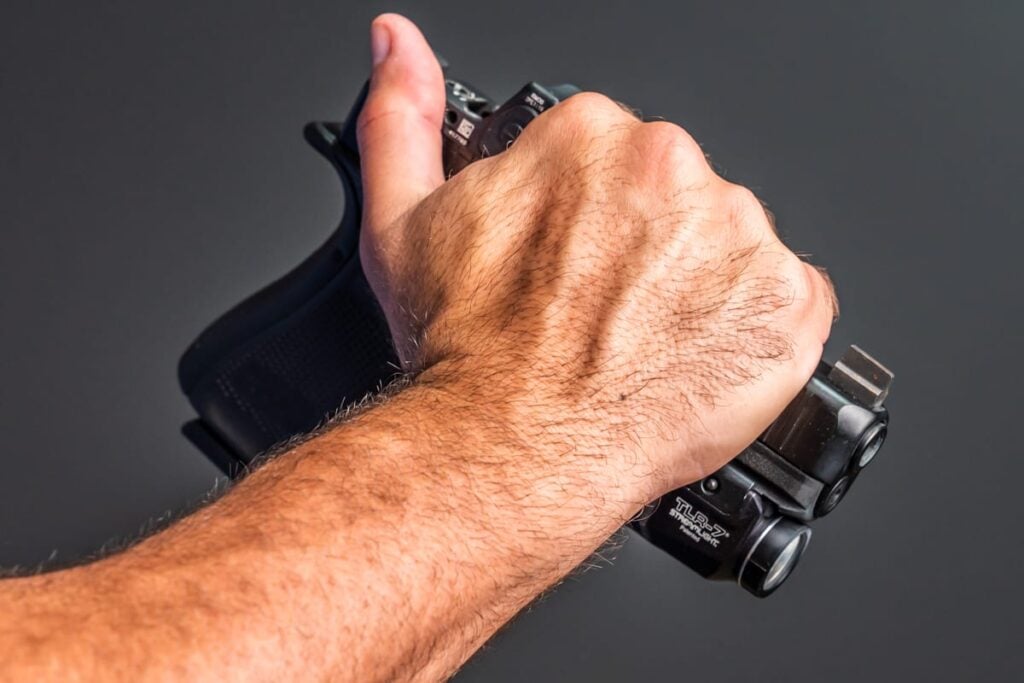 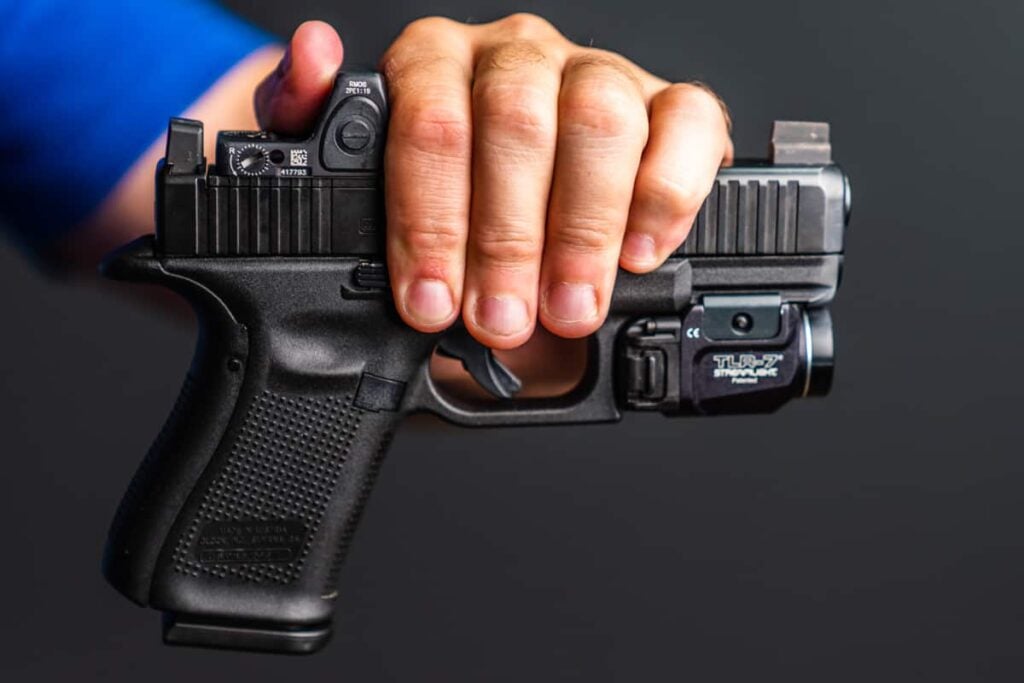 A second method for handing the gun to somebody is to grasp the gun so that your thumb is over the slide and your index finger is below the trigger guard, or right in front of the trigger guard, with all fingers clear of the trigger. This grasp provides the full grip to the person receiving it, yet safely controls the gun. I find that this technique is preferable when handling a shorter pistol with less barrel length. The muzzle of a smaller gun can be dangerously close to the edge of your hand with the over-slide technique.

Even when handing a full-size pistol to somebody, this is actually my preferred technique as I find it generally safer. When releasing the gun after the other shooter has acquired their grip, this technique allows me to draw my hand more safely away from the gun without getting my hand muzzled. This technique also works well when taking the gun back. From safely behind the new shooter, clamp your hand back around the gun in this manner. Now safely take it back out of their hands. 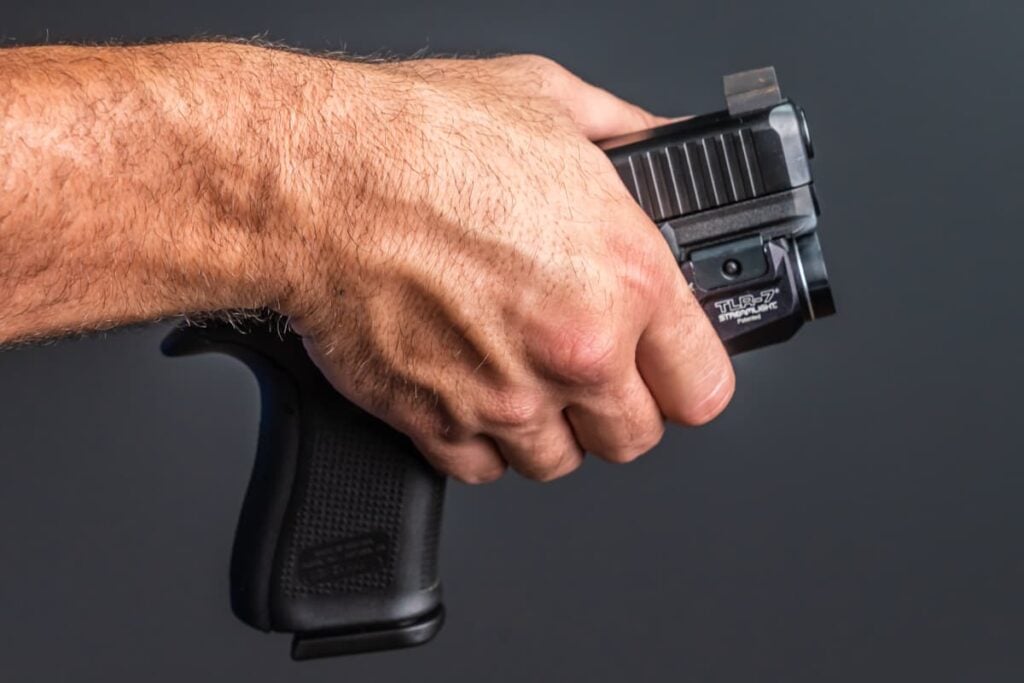 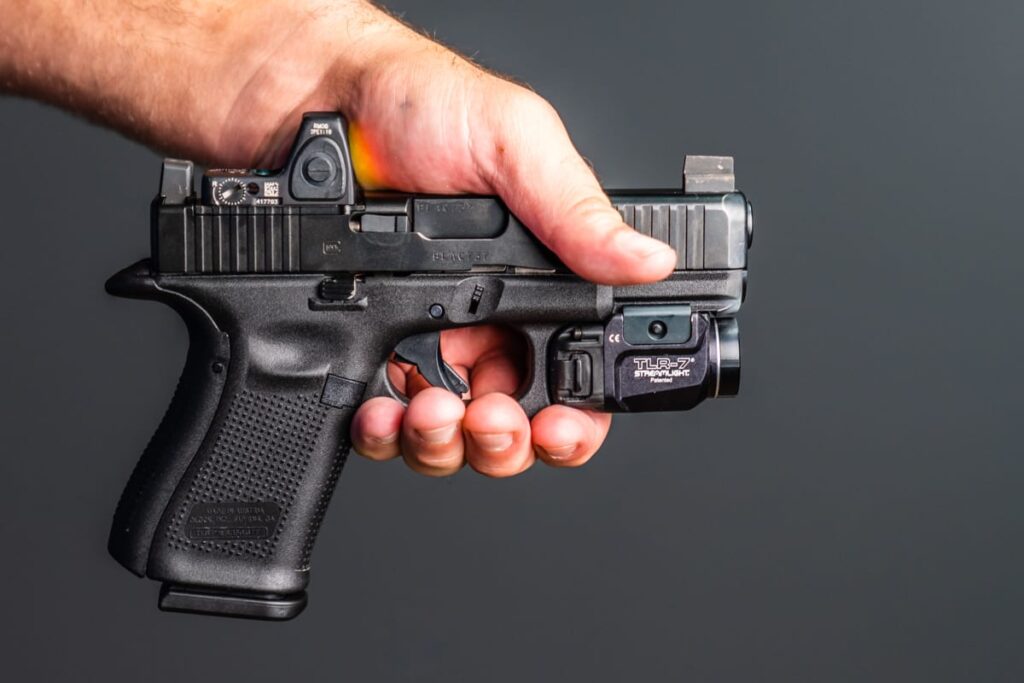 You want to avoid being shot through the hand, obviously. Such an incident can prove to be a life-altering event. Whichever technique you employ, be sure to keep the gun safely downrange. And keep fingers outside of the trigger guard. Do not take the activity of handling guns lightly. And knowing how to hand and take a gun from another shooter in a safe manner is of great importance.