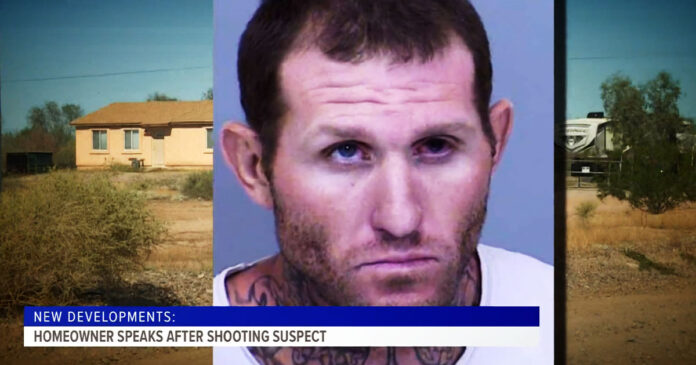 “It’s time to recognize that there are evil people in the world that wish to do you and your children harm. This is the perfect example of what evil looks like,” said Sheriff Paul Penzone during a press conference announcing that the manhunt for 30-year-old Clinton Hurley was over.

The police were processing felony warrants on Clinton Hurley, who is a convicted child molester. He attacked a deputy and stole his car. That deputy had to be put on life-support and later passed away.

The manhunt for Hurley ended with him being shot by an armed homeowner, sending him to the hospital in critical condition.

Authorities initially reported that the homeowner and Hurley had history, but the homeowner how wanted to remain anonymous said he didn’t know Hurley. But he did have a previous encounter with him the day before.

On Friday, Oct. 8, 2021, Hurley showed up at the homeowner’s house with a wooden knife scaring his daughters. The next day, he showed up again armed with a gun. He pointed at the homeowner’s father, and the two exchanged gunfire. Hurley was the only person hit. He was airlifted to the hospital.

The homeowner also told reporters that he doesn’t usually carry a gun but is grateful he did that day to protect his family.

Just as Sheriff Paul Penzone, this sounds like pure evil. And you never know when evil will show up at your doorstep. That’s why we, as concealed carriers, should always carry. I made a video a while back titled, “Don’t Be Lazy | Always Carry a Gun.” In it, I mentioned that I carrier while cutting the grass. It’s finally how many comments I got about this. Some comments thought it was ridiculous to have to carry while cutting grass. Or if I needed to carry while cutting the grass, maybe I was in the wrong neighborhood, etc.

What would have been the outcome for this homeowner and his family had he not decided to carry a gun that day? This was a completely random attack from what sounds like a violent criminal with very bad intentions. And this is why we should always carry when we can. At home, have a firearm readily accessible.