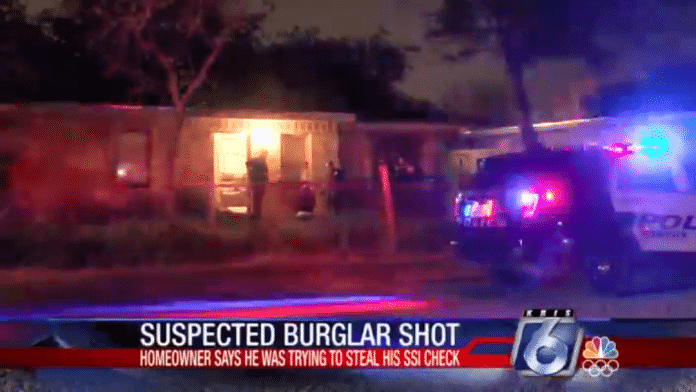 A little after 4:00 AM on April 20, 2020, a Corpus Christi, TX man stumbled out of a home with at least one gunshot wound. He went to a neighboring home and got the residents there to call 911 for him.

Police detained the man who fired the shots but soon learned that he was the homeowner. The gunshot victim had broken into the house. The two knew each other. The victim used to live in the house but had not lived there for several months.

“The resident and the person who got shot do know each other. At one point the man was living there but it’s been several months since he’s lived here.” said Lieutenant Michael Wertanen. via KRIS 6 NEWS

While police said it doesn’t look like the homeowner will be charged since he was defending his home this one ultimately could go either way depending on the mood of the prosecutor.

If he is charged, it could very well be on the strength of his own statement to police that the man was there to steal his Social Security check. Yes, this is Texas and he did break into the home. Or did he? This is a bit unclear. Did he still have a key? Breaking into a home means breaking something to get in. If he had a key it would be simple trespassing. But by the homeowner’s own admission he was not there to hurt him, only to steal his check. There was no mention that the man breaking in had a weapon.

Without a weapon, was he a legitimate deadly force threat? Again, this is Texas but generally speaking, someone breaking into your home does not automatically give you the right to shoot them. Your actions still must be reasonable considering all the circumstances surrounding the incident. Know the law in your area and always speak to an attorney before giving a detailed statement to the police.