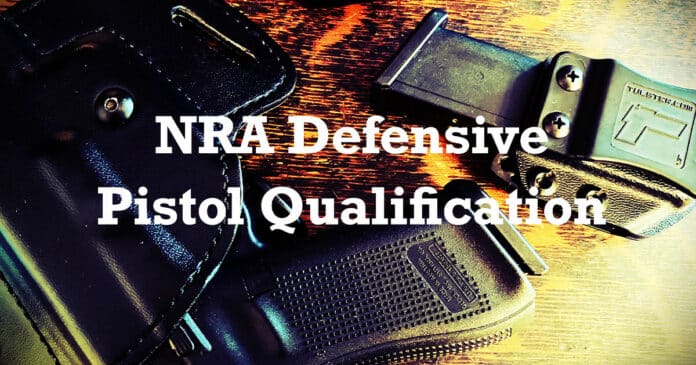 Most people don’t know much about NRA training except the very basic, Basic Pistol course. If I had to guess, that is the most often taught NRA course. The NRA has came out with a relatively new course though called Defensive Pistol. This is separate from the Personal Protection In The Home and Personal Protection Outside The Home courses that have been around quite some time. The new course also has a qualification built into it. Since I am casually exploring the concept of “minimum requirement” courses of fire, I thought I would give it go and share my thoughts.

The course of fire calls for 34 rounds, which is nice these days. There are 9 strings of fire total, split between 3 yards, 5 yards, 7 yards, and 10 yards. The bulk of the work is at the 5 and 7 yard line, with only one string at 3 and two strings at 10 yards. For a minimum acceptable standard, I am okay with the qualification only going to 10 yards. Remember, this is a starting point, not an ending point. That is the purpose of any minimum acceptable performance standard. This where we begin, not end.

The target to be used for this qualification is an FBI qualification target or an NRA D-1 target. Any hits inside the bottle on the FBI target or the scoring rings on the D-1 count, and all rounds have to hit. That is right, 100% or not at all.

Most of us are probably familiar with what an FBI target looks like. If you aren’t familiar with the D-1 it is the tombstone-looking target used at Bianchi Cup. That is about the only place it is used.

All strings of fire are supposed to be shot from concealment, out of a holster carried on the strong side hip. This is a bit out of touch with the prevalence of appendix carry but is not surprising. I imagine most of the people who would be shooting this in a class are likely to be carrying that way anyway.

My thoughts on the NRA Defensive Pistol Qualification

I think this is a qualification that most people could pass with a single day of competent instruction. The time standards are generally generous, and the target size is generous. The two strings of fire that are the most difficult, and also seem a bit out of place, are the 10 yard strings. They are the only strings of fire that have a 1 round per second time standard. All of the other strings have a time limit that exceeds the number of rounds fired.

I personally did not find the qualification difficult, but someone of my experience level shouldn’t. This qualification is supposed to be a starting point. The beginning of a journey. I think it does that well. It is challenging enough to matter but accessible enough that it will not demoralize new or inexperienced shooters.

If there was a need to make it more difficult, I would suggest perhaps cutting the time standards in half. That should elevate the skill necessary to shoot it and pass to keep it interesting.