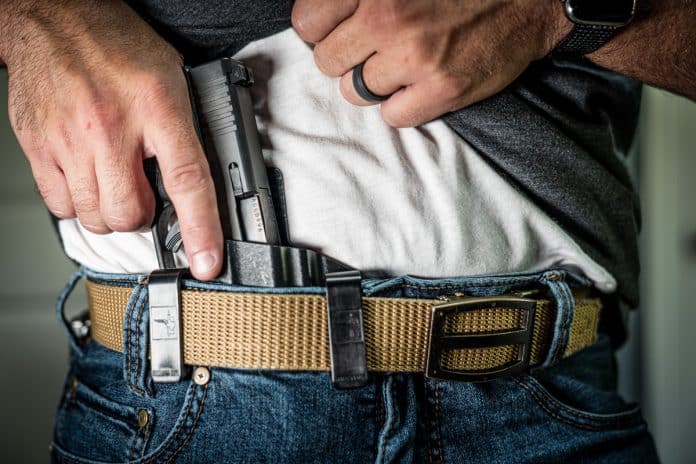 A majority of self-inflicted gunshot wounds that occur during firearms training or range practice involve the re-holstering of the gun. This is most often the result of poor training, poor gear choices, and a natural human tendency to become distracted during seemingly mundane tasks. While much training effort focuses on the draw, re-holstering is most often glanced over as merely an administrative procedure. The reality is, re-holstering your handgun is potentially the most dangerous thing you will ever do with a gun. The proper technique and mindset concerning this particular aspect of gun handling is in order.

Re-Holstering with Safe Gear and Clothing

Before delving into the proper approach to re-holstering a handgun, we must discuss some gear and clothing considerations. These directly influence the safety, or lack thereof, of re-holstering. We can attribute many negligent discharges to sub-optimal gear or clothing. When carrying a concealed handgun, you must take all of these things into consideration. To do it right, wearing a gun will influence your clothing choice to some extent.

There are several aspects to consider. First, choose a holster constructed of rigid material that completely protects the trigger of the handgun and prevents any foreign object from reaching the trigger. The two materials that holsters are appropriately made of is leather or kydex. The only exception to this may be for dedicated pocket holsters that are designed to retain a gun with a long double-action trigger pull. Holsters worn in the waistband should be made out of one of these two well-established materials. The exception to this will be belly-bands with guns safe for use in such a carry mode. But belt mounted cloth holsters have no place on or in the waistband of a concealed carrier.

Even with certain leather holster designs, you need to ensure that the holster stays open after you have withdrawn the gun. Some leather holsters will collapse under the pressure of the belt tension once you remove the gun. This poses a hazard because it demands that you use your second hand to open the holster to re-holster the gun. Usually, this will involve muzzling your hand while re-holstering. Muzzling yourself is unacceptable, and it is an accident waiting to happen. A good holster design will facilitate re-holstering safely with one hand.

Some concealment garments pose certain dangers. The foremost hazard that comes to mind are jackets with drawstrings. Most jackets with drawstrings have them on the sides or front of the garment. Either location poses the potential to interfere with a strong-side or appendix positioned holster. There have been numerous documented examples of negligent discharges caused when a drawstring gets caught up in the holster when the individual re-holsters, resulting in the inadvertent pull of the trigger. Drawstrings should be cut off, or simply avoid buying jackets that use them.

Beyond just the drawstring issue, consider all of your clothing choices. For example, do some garments snag when drawing the gun or, pertinent to this discussion, obstruct the holster when re-holstering? Garments with long tails that may drape into the holster can pose an issue. Likewise, buttons placed in bad locations can cause a problem, and the full consideration of these possibilities is in order for every garment that you wear when armed.

Avoid Flagging your Own Body when Re-Holstering

The second significant consideration for safely re-holstering is to avoid pointing the gun at your body parts. This is an easier mistake to make than most realize. Any carry mode poses the opportunity to flag your own body when re-holstering. Appendix carry falls under heavy scrutiny due to the perception that the gun is pointing to a more vital area of the body. This is true to some extent. A negligent discharge in the appendix position can cause a wound to the genitals or the femoral artery. This can easily be lethal. Still, strong-side hip carry can result in bad wounds as well. Many shooters tend to tilt the gun inwards when re-holstering, thus pointing the gun down through their hips.

Re-Holstering? Pay Attention to the Task

Regardless of what carry mode you use, there is one over-riding principle that should guide you when you re-holster your gun: pay close attention to what you are doing. The late, great handgunner and trainer Todd Louis Green referred to the need for a “hard break” in your mental concentration when it comes to re-holstering. After finishing the shooting sequence, you need to pause and shift your entire mental capacity to the task of re-holstering the gun. Do not routinely re-holster the gun after the fact with little thought. Rather, it should be a deliberate act that you focus on, just like drawing the gun.

When re-holstering, be sure your finger is outside of the trigger guard and up along the slide. Look at the holster and sure you can see the unobstructed holster mouth. Make sure that no clothing or other items are obstructing the holster’s entrance. When holstering, be sure that you do not push the gun if you meet any resistance. If something is obstructing the re-holstering process, fix it. Never force the gun into the holster.

Follow these principles to ensure that you re-holster your gun safely. While a fast draw is important, there are no awards for re-holstering quickly. Do it deliberately, safely, and be sure that you are using optimal gear and clothing for your concealed carry needs.