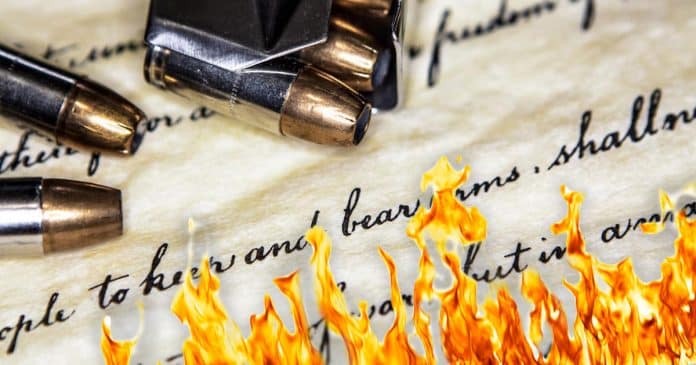 I am endlessly amused when I hear a gun owner tell me, “I am not political,” or, “I stay out of politics.” In a perfect world, our liberties would be secure enough that we could ignore politics at our convenience. However, we don’t live in a perfect world and there are political forces hell-bent on taking your constitutional rights away from you. If you believe in maintaining the tools and skills to defend yourself from evil, then congratulations on preparing for that fight, should it come to you. However, you need to be an active combatant in a second fight: the fight to maintain your liberty.

There is only one firearms-related venue in which I hold my tongue on politics, and that is when teaching people how to shoot. I don’t want to turn off new shooters and I applaud them for arming themselves and seeking training regardless of how they vote or what they think. Beyond that, however, I am quite blunt:

If you believe in being armed so that you can defend yourself and your loved ones from violence then you should also be engaged in fighting those who would strip you of that right.

Who is out to take your rights from you? Well, one particular American political party has infringement of the Second Amendment written right into their party platform. I will leave it at that. If you believe in constitutional liberty, that particular party is your adversary. Let us not mince words. If you favor that party over the other because there are different issues that mean more to you, no problem, but be honest with yourself; you are supporting those who seek to strip you of your right to keep and bear arms. True, some on the other side of the aisle seek to do the same, but as a party platform, the choice should be clear to you if you want to protect your 2A rights, and arguably most other Constitutional rights.

So, as a law-abiding gun owner who believes in the founding principles of this nation, what should you be doing to defend those principles? If your answer is to post a “come and take it” meme on social media, you are not helping. Fighting with your ignorant friends on Facebook or with strangers in a comment section is not particularly constructive. Instead, we must be engaged in a rabid fight in the political and cultural war in a way that matters if we want to preserve our freedoms, and, indeed, win back what has already been lost. How do we do this?

Join the Fight by Joining the Groups

Beyond just joining and paying the annual member dues, contribute what you can, when you can. I find that too many shooters who spend thousands of dollars a year on ammunition are not inclined to kick in a hundred bucks to actually protect their rights by supporting the 2A groups. Really? Remember that the anti-gun organizations are well funded by certain billionaires who invest millions upon millions of dollars into the sole mission of disarming you, the law-abiding citizen. We have no such sugar daddies on our side, so it is up to you and me.

Be Active in Contacting your Representatives

Send emails, letters, and most importantly, call your state and federal level representatives. Speak to who picks up, or leave a message. Politely demand that your representatives uphold the constitution and reject anti-gun legislation. The single thing that can override a politician’s goal of trampling liberty is the thought of not getting re-elected. When these politicians receive phone calls in favor of rights rather than against them at a ten-to-one ratio they read the cards on their own re-election. Don’t let up on this pressure. While the anti-gun radicals have the money, we have the numbers, if we would simply be active.

Show Up and Volunteer

Be sure to turn out at peaceful rallies that are held to support the Second Amendment. Be sure to turn up when your county or city council has meetings on the subject. Be at the state capital to lobby and make it clear that you and your fellow gun owners are not going to accept further infringements on your rights. The activists for the groups that wish to disarm you always show up. They have big money and organization behind them. We need to show up tenfold compared to what they do. When it comes to electing representatives, be willing to volunteer to help the ones who respect the Constitution. Knock on doors, make phone calls, donate money, do anything you can do to help win this fight.

Win the Culture War by Spreading the Shooting Sports

The best way to cure an emotionally driven fear of firearms is to take the individual suffering from it to the shooting range. Never once have I taken a first-time shooter, no matter their political leaning, to the range that did not have a good time. The best way to fight gun control is to fix the ignorance that too many citizens have on firearms. While those who lead the anti-gun movement are ruthlessly tyrannical, the average sucker that votes in favor of their agenda is simply ignorant. Take people shooting and have civilized conversations with them to give them the facts. It is not rocket science; the places in the United States with the strictest gun laws are the most crime-ridden murder capitols. Arm yourself with the facts and share them.

There are over one hundred million gun owners in the United States, probably well more than this since most gun owners don’t volunteer such information to pollsters. If even ten percent were active in preserving our rights, there would be no gun control at all. Time to get motivated and to motivate your fellow gun people. If we take action, we win. If you sit on the sidelines, we lose our rights for ourselves and for our children. Don’t let that happen.

Actually, I wish there were more articles and resources provided on how to get more politically involved.

I tried to find a local group last year to get involved in helping with the Trump campaign and Conservatives in general, but found very little on the Web.

I didn’t fully realize at the time, but it is obvious now that Google was suppressing links thst favored Conservative views and instead was only returning search results on how to stop Trump and/or the Conservative movement.

I Googled “how to help Republicans campaign” or *How to support Trump” and all I ever got back was articles and links on how to stop him or links to groups that were Political Action Committees thst were liberal.

I wish I knew how to get more involved in local politics because it is going to take a major grass roots movement and “everyone” getting involved if we are to save our 1st and 2nd Amendment rights and our Country.