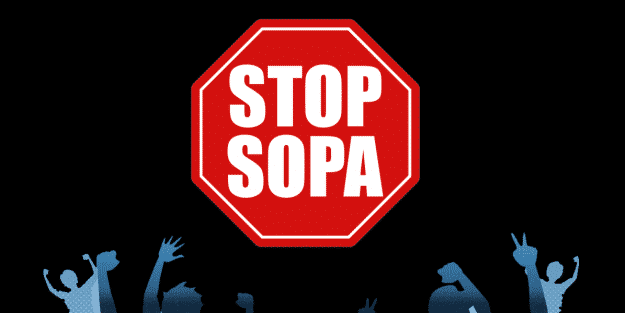 By now, you are no doubt aware that several websites have either gone totally or partially “dark” today in protest of the pernicious internet legislation that will be coming to a vote next week. Wikipedia and Google are just two of the websites which are protesting in this manner.

And while you may have not paid much attention to this story, you need to know that the “muzzle the web” legislation these sites are protesting could also affect your ability to get gun-related information on websites like GOA’s.

The reason is that S. 968 could, in its final form, allow the Brady Campaign to partially shut down our GOA website and our organization (plus many other pro-gun websites) with a series of factually accurate, but legally frivolous complaints.

The Senate bill and its House counterpart have accurately been called “a direct attack on the underpinnings of the web.”

True, many of the most serious “gun problems” are in the House counterpart. But the reality is this: We are within a few votes of killing the whole concept next week in the Senate with only 41 Senate votes.

But if we allow the so-called “anti-piracy” bill to go forward on the HOPE that the worst provisions will not make it into the final version -– and we fail to eliminate them -– the bill may be unstoppable.

Here are the “gun problems,” as we see them:
Section 103(b)(1) of H.R. 3261 allows any “holder of an intellectual property right” to demand that PayPal and other payment and advertising services stop providing services to organizations like ours, thereby shutting off our income.

How would they do this? Perhaps by arguing that we were stealing their intellectual property by quoting their lying misrepresentations in our alerts.

Is this legally frivolous? Sure it is. But the Brady Campaign is the King of Frivolous Complaints:

* Remember when the Brady Campaign asked the Federal Election Commission in 2007 to shut down GOA’s ability to post its candidate ratings on the Internet? They claimed that we were in violation of the McCain-Feingold Campaign Finance Reform Act. Thankfully, the FEC ruled in GOA’s favor, thus enabling us to continue posting candidate ratings without restraint.

* Remember when the Brady Campaign got 36 state and local jurisdictions to bring frivolous lawsuits against gun manufacturers –- not in the expectation of winning, but to drain the resources of the manufacturers in order to halt the manufacture of guns in America?

This “muzzle the web” legislation will throw the doors open to even more frivolous complaints. Could we defend ourselves? Yes, we could. We could file a counter notification under section 103(b)(5) and spend years defending ourselves. But the one thing we did learn during the 36 frivolous lawsuits is that the anti-gun forces in America have very deep pockets.

And the other problem is that, under section 104, our Internet providers would be insulated from liability for shutting us down. But they would receive no comparable insulation from legal liability if they refused to cut us off.

The Senate version, S. 968, has been amended, at the behest of Iowa Senator Chuck Grassley and others, to provide many protections which were not in its initial form.

Under section 3, the Attorney General would go to court and would have to claim that, because of a hyperlink to an offending site, we were “primarily” engaged in the theft of intellectual property.

We would feel a lot better about these protections if the Attorney General were not Eric Holder, a ruthless ideologue who has demonstrated that he will go to any lengths to destroy the Second Amendment.

So the bottom line is this: H.R. 3261 and S. 968
would potentially empower the Brady Campaign and Eric Holder to go after our Internet site. To do so, they would have to make the same frivolous arguments and engage in the same lawless activity that they have done so often in the past.

But -– given that we’re within a few votes of snuffing out that risk by killing the bill in the Senate -– we believe it’s the better course of action to do so.

ACTION: Click here to contact your Senators. Ask them to vote against S. 968, every chance they get.

God, seriously is are government really going to do this? I knew are government was not right in line, but this is way off base. Can’t they get together an figure out how to fix the economy instead of trying to control us!!!!! Come on!!!

I have been trying to use this to our advantage. Every time someone I know gets irate about this unconstitutional power grab I smile and tell them; “Now you have an idea of what we responsible, law abiding gun owners deal with all the time.”

Yet another example of how big government is trying to regulate our lives in any way possible.    Yes, we need to demand our congress people vote no on all this stuff, but we need to do far more than that.   We need to stop playing the party politics game because they’re ALL a bunch of lying crooks.   We need a total change in the “system” of government and not just another four years of the opposite party which usually results in the same dance . . . just a different tune.

Government needs to go back to being of, by and for the people.   The real people.    A small strong central government is all that’s needed.   Government has to stop trying to be all things to everyone.   It needs to stop regulating and monitoring every aspect of our lives.   It needs to stop pouring our money into foreign countries or entitlement programs for the lazy and the illegals of  ANY  color or origin.

Government need to stop taking our money from us and bailing out banks, wall street and corporations.   We need to get back to manufacturing every item we consume and stop our dependence on foreign third world countries for essentials.   So yes, support the defeat of this legislation but don’t stop there because more legislation just like it will come along.   We need to change the very system that starts this stuff in the first place.

The malicious do-gooders are at it again.  this is yet another example of Big Brother trying to interfere with our rights and control our lives.   The Brady do-gooders and others of their ilk are always cooking up such schemes, so we have to remain alert and combat them if we expect to maintain our freedoms.   The price of liberty is eternal vigilance – from within as well as without.

Perhaps GOA should consider becoming or developing a internet ‘News Reporting’ site so it would be exempt from various lawsuits and Gov’t shut down orders.  Take a page or three from Brady, et al.