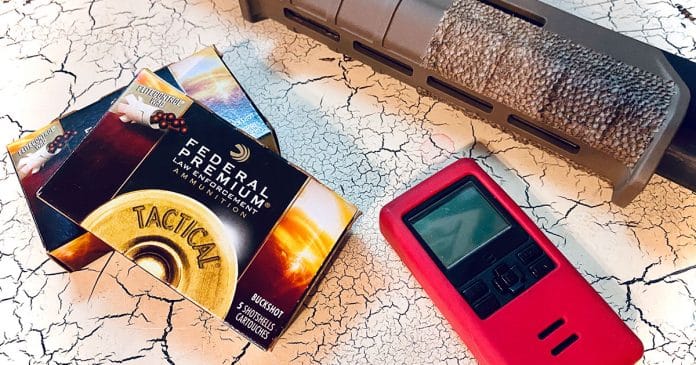 There are not many skill assessments out there that will give us an unmistakable mark of personal performance when it comes to shotgunning. There are various qualification courses, but those courses are of limited value beyond giving us a pass/fail metric. Once the shooter maxes a qualification’s score, the course can no longer provide useful feedback on the shooter’s continued growth. The associated qualification courses always seem very basic and easy to shoot with shotguns. I decided I needed more. This is my attempt at coming up with a contextually appropriate course for the citizen defender and can continue to measure performance growth over a longer period of time.

The course is intended to be shot with buckshot. This simplifies scoring and mimics (hopefully) what the gun’s loadout would typically look like. It calls for just 10 rounds and uses an IDPA target or some other type of target with an 8” circle in the high center chest. The distance is 10 yards for each of the 4 strings of fire. I chose this distance as it is likely to close to what most people have as a possible engagement in their home. Of course, some will be shorter, and others longer; I hope that this is a potential middle ground.

The scoring is simple. Anything outside of the 8” circle adds one second to the total time. Assuming a 9 pellet buckshot load, there is a lot of potential for penalty seconds. This, of course, favors gun and load combinations that shoot tight patterns. This is by design, as a tighter pattern is generally preferred for personal defense.

The strings of fire are straightforward and meant to test key skill areas related to the shotgun’s basic operation.

The Course of Fire

String one starts with a shotgun loaded with 3 rounds to cruiser ready or cruiser safe depending on the shooter’s storage mode. A round is chambered on the signal, and one round is fired.

String two, the shooter starts from low ready. The muzzle should be pointed at least 1 foot in front of the target stand’s base. On the signal, the target is engaged with 2 rounds; the shooter conducts an emergency reload and engages with 1 more round for a total of 3.

Between strings 2 and 3, load the shotgun with 4 rounds.

String 4 is meant to focus strictly on controlling the gun. The shooter will engage the target with 3 rounds on the signal starting from ready.

Once all the strings of fire are completed, add the raw time and any penalties together to get the total time. As a shooter’s skill level improves or the equipment is optimized, total time should become less and less. While it is not a perfect scoring system, it should keep pace with shooter growth for quite some time.

Are you running a shotgun? Give it a go and drop your results in the comments. I would be interested to hear how people do and what the feedback is.