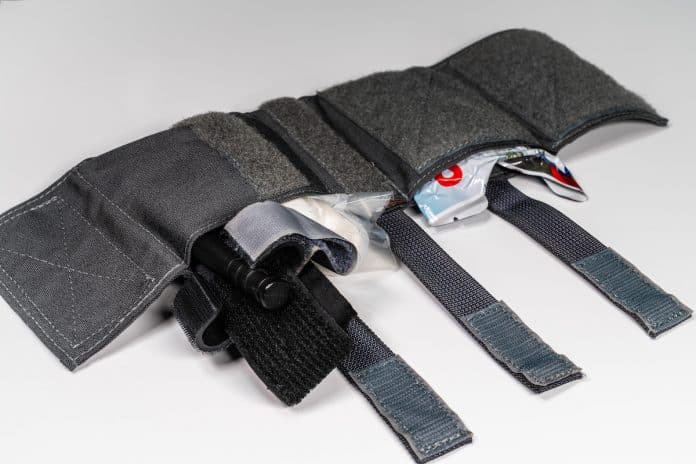 The shooting and self-defense community has evolved significantly over the past two decades in both technique and gear. We can attribute much of this change to the almost two decades of war that our military has been in. Innovation and advancement in technology is always a byproduct of war, and the war on terror has been no different. Beyond advancements in fighting techniques and weaponry, however, has been a great leap forward in emergency medical treatment.

A decade ago there were very few people in the civilian word that carried any sort of emergency medical gear in their daily life. The influence of the modern battlefield has trickled into the practice of law enforcement and concealed carriers, and a focus on the carry and use of trauma gear has been a very good thing.

There is no doubt that many lives have been saved with the use of hemorrhage control devices designed to slow or stop severe bleeding. This is not only useful in the context of self-defense, of course, as most people are more likely to use these emergency tools in the aftermath of a car crash or industrial accident. The tourniquet, in particular, has proven to be a lifesaver. However, the challenge with medical gear is that it tends to be somewhat bulky and actually carrying it on your person can be difficult.

Many people will keep a tourniquet and perhaps other trauma care items in a vehicle or pack, but the problem is this: a tourniquet is similar to a firearm. If you need one you need it RIGHT NOW! If yourself or someone near you sustains a severe injury that ruptures a major artery in a limb the time it takes to retrieve a tourniquet from a vehicle, or a pack could be far too long and far too late. Therefore, keeping a tourniquet on your person is best practice. The problem remains that carrying a tourniquet and other medical gear takes up room. As concealed carriers, we are usually packing significantly more things than the average person already, so making room for medical can be challenging. I have been carrying a trauma kit on my person for quite some time now, and here I offer some tips to make it work.

First, let me say this from the beginning: carrying medical gear does you no good if you don’t know how to use it, so get training. There are a number of good outfits offering one or two-day emergency medicine or combat casualty care classes, so get some training.

For the simplicity of our discussion here, let’s look at what we should try to carry on our person as the bare minimum. Most shooters typically think in terms of dealing with gunshot wounds. For such, we work with a toolset consisting of tourniquets, hemostatic gauze, pressure dressings, and chest seals. Carrying all of these things on our person in daily life is quite challenging, so our EDC is, of course, going to be a compromise. Therefore, going with what statistics seem to indicate is the most likely needed tools to control severe bleeding, we see that the most useful item is a tourniquet. Following the tourniquet, a hemostatic gauze makes sense, followed by a pressure bandage. Any sort of pressure bandage tends to be bulky, and many will opt to carry a tourniquet and hemostatic gauze but perhaps not a dedicated pressure bandage.

Starting with the tourniquet, if you are only going to commit to carrying one piece of medical rescue gear, this is it. Most people do not realize that one of the biggest killers on the battlefield is hemorrhaging from an appendage. You can die as quickly from a severed femoral artery in your leg as you can from a severed artery in your chest. A person can bleed to death from a femoral bleed in two minutes, and they can lose consciousness in thirty seconds. Realistically, the only way to keep an individual alive after sustaining such an injury is to stop the bleeding with the use of a tourniquet. If you have thirty seconds before you or another injured party loses consciousness, you need to have that tourniquet on you, not in your car out in the parking lot.

When it comes to carrying a tourniquet you have many to choose from. Generally speaking, the professional, combat proven tourniquets that use a windless (a small stick that facilitates winding the tourniquet tight) are the ones that work the best. The two most proven options are the CAT tourniquet and the SOFT-T designs. The downside to these is that they are comparatively bulky. Some of the smaller designs do not have a proven record, and the windless designs are generally recommended. However, let’s face it, carrying any tourniquet is better than having no tourniquet. If you can make it work, carry a windless design, but if not, carry something and learn how to use it. The tourniquet is the most essential piece of medical gear to carry, but if you can spare just a little more room, carrying a pack of hemostatic blood-clotting gauze also makes good sense. This sort of gauze makes blood clot quickly, and you can pack a wound in the junctures of the body where a tourniquet will not work.

So, how do we carry this stuff? Certainly, keep a full-blown trauma kit in your vehicle for use in an emergency or car crash, but how do we carry a slimmed down kit on our person? Think back to the thirty seconds you have to apply a tourniquet before blacking out. There are a few options. Most likely you can carry this gear in a pocket, on the belt, or on your ankle.

Let’s say you are going to carry the bare minimum, a tourniquet, and you will carry a combat-proven windless design. These can typically be “flat packed” so that they are as slim as possible, you can find videos online demonstrating this. These tourniquets need to be held in their packed state with rubber bands. There are also some products on the market that serve as a carrier for these tourniquet designs that can hold it in a compact nature in a pocket or be fastened to a belt. Carrying the tourniquet in the pocket probably depends on your available pocket space, dictated by what sort of pants you wear and how much other stuff you are already carrying.

If you step up to carrying more than just a tourniquet then you will need to use some sort of pouch. You can buy pre-fabricated medical pouches of all types and sizes, or you can assemble your own. Assembling a pouch small enough to fit in a pocket is possible, but you will not be able to fit anything else in that pocket. One of the smaller tourniquet options and a pack of hemostatic gauze can fit in a fairly small pouch and ride in a hip pocket. To carry much more than this, however, will be challenging with pocket carry.

Another approach to carrying medical, which I have recently moved to myself, is ankle carry. There are a number of outlets that make ankle carriers specifically for this purpose, and there are also companies that sell ankle medical kits fully stocked. Many of these ankle carriers come stocked with a serious tourniquet, hemostatic gauze, a pressure dressing, gloves, and some manage to squeeze in more than even that. We are all individual when it comes to what we consider realistic for carry. Personally, I find that carrying a pressure dressing on my ankle a bit large and hard to hide, even under loose pants. I carry a SOFT-T Wide tourniquet and a pack of combat gauze in my ankle carrier, and I find this reasonable in size for carry. Certainly, if you can carry more, then squeeze in whatever else you can fit. The biggest downside related to ankle carry, in my opinion, is that you can’t really carry this way when wearing shorts. Those who live in warm climates and prefer to wear shorts will find this option somewhat limited.

In closing I will say that carrying medical gear is similar to carrying a gun: it requires some thought and experimentation to find what works for you. You might also change your mind over time as to what and how you carry medical, similar to carrying your gun. I would suggest that carrying at least a tourniquet can go a long way towards saving the day and while more is better, just like a gun, carrying at least a tourniquet can stack the deck in your favor. Get training, carry what gear you can, and walk the world a bit more prepared. Realistically, you are more likely to need to plug holes than make holes on any given day and carrying the tools to accomplish either task is wise.