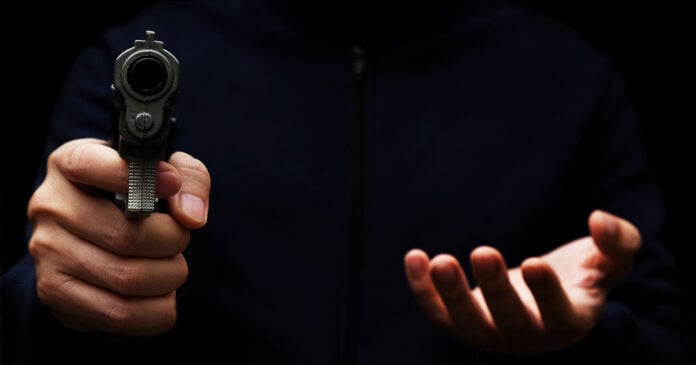 Armed robbery is one of the most common forms of violent crime in the United States. This particular act is committed by a single or multiple criminal actors who utilize a weapon of some kind to intimidate the victim(s) into submission and compliance, thus offering up whatever property the criminal seeks to obtain. Armed robbery can happen almost anywhere and often takes place in parking lots, on city streets, in places of business, stores, and elsewhere. By its very nature, armed robbery proves a very violent and dangerous event as the very act of committing armed, aggravated assault against another person requires a violent criminal personality. While there are some robbers who never hurt anyone in the commission of their crimes, these are rare, and hoping that you are victimized by such, if unfortunate enough to be robbed, is wishful thinking.

Legally, using lethal force to neutralize an armed robber while he is in the commission of the crime is typically justified as the very act itself meets the ability, opportunity, and intent checklist. Any criminal actor that puts a gun in a victim’s face, or a knife to a victim’s throat, clearly has the ability and opportunity to deal death, and the act makes clear that the intent is there. Now, chasing after a robber after he has committed the crime and is fleeing the scene is not self-defense. Likewise, if forced to shoot and neutralize a threat, once the threat is down and incapacitated, no longer capable of shooting back, a self-defender is not justified in standing over and executing the perpetrator. However, when a criminal actor is in the act of robbing an innocent person at gun or knifepoint, lethal force against that perpetrator is justified.

Surviving an armed robbery tends to be much more about mindset than toolset. This author encourages all concealed carriers to actually carry their firearm at all times legally possible, but dealing with an armed robbery requires more than simply having the tool on person (although it is essential to have the tool on person). The mindset needed to fight back, and do so in an effective manner, needs to be specifically built. To condition yourself to face this unfortunately frequent crime, should you find yourself being robbed, consider the following:

As previously stated, a criminal who would intimidate a victim with a weapon is, unquestionably, a violent criminal, not a petty thief. Therefore, you must understand the mentality of this sort of individual. The overwhelming majority of criminals who commit armed robbery will, without hesitation, maim or kill a victim who does not comply, and many will maim or kill a victim even after that individual complies. Make no mistake, the personality type capable of sticking a gun or knife in the face of a stranger is capable of any degree of degradation and violence. Therefore, a survival plan based on begging for mercy from the robber is a fool’s errand.

There are many crimes committed each year in which the robber executes the victim even after getting whatever property was demanded, just because. This form of criminal cannot be reasoned with and cannot be expected to have mercy on their prey. Rather, the best survival plan should incorporate a mechanism for immediate force response. In order to formulate an action plan, you must solidify your mindset, and the first part of doing that is to except that any criminal actor capable of armed robbery is more than capable of taking your life in a heartbeat. Expect no mercy from such a criminal actor, and prepare to survive through a neutralization of the threat through any force necessary.

I have seen many videos caught on surveillance cameras of victims being robbed in all sorts of environments. Many of these events have displayed numerous opportunities in which even an unarmed victim could act to neutralize the robber, yet failed to do so. I have seen such videos where a robber will be bent over, looking at the cash in the drawer, while the victim is right next to them; all the victim would need to do is grab a heavy object off the counter and split the criminal’s skull open. However, rarely does the victim act during such an opportunity, and often the criminal kills the victim after getting what they want anyway. The only way to condition your mindset to act is to accept what the violent criminal actor is and accept that he is very likely to kill you even if you comply.

Consider the Opportunity to Act

Depending on the situation, you may need to feign compliance at first if you are taken by complete surprise and end up with a weapon in your face at contact distance. Knowing basic hand skills, such as deflecting and disarming weapons, is important. If at close but beyond contact distance, you may need to fake compliance, then draw your own gun at the right opportunity, which will usually be at the point when the criminal is momentarily distracted. While you don’t want to make your move when the criminal is fixated on you, even the slightest turn of the eyes can give you the opportunity.

Fighting back against the robber, especially when armed, is remarkably effective, and statistics favor the armed defender. The primary reason for this is the fact that criminals do not anticipate resistance. Most criminal actors who hold people up in armed robbery have done so many times and are conditioned to encounter a whimpering, terrified, and compliant victim. They are not anticipating a victim who will, at any moment of surprise, produce a gun and shoot them. If they had ever met such a victim before, would they be standing before you, robbing you? Resistance is the last thing they expect, and when a victim fights back, they are taken by complete surprise; this is your greatest weapon. A decisive action at a moment of opportunity most often leads to victory on the part of the defender.

While it is a sad fact that armed robbery is as common as it is, surviving criminal predation is a matter of accepting reality, not denying it. Carry your defensive tools at all times possible and, most importantly, build your defensive mindset based on the acceptance of the adversary; he is not like you, and he does not value human life as you do. Prepare accordingly.