Meet the new Taurus GX4. This is not a newer version of a previous model. This is a brand new Micro Compact 9mm from Taurus that is going up against the Sig 365, Springfield Armory Hellcat, S&W Shield Plus, and the Ruger Max9. I think that’s all the micro compact 9’s that are currently out as of this writing. If I missed one, let me know in the comments.

Below is basically the outline I used for the video edited a bit to make it somewhat readable.

It shot great. That’s what both David (a friend that happened to be at the range) and I said. I’m able to get a decent grip on it or at least where my pinky isn’t just hanging off the bottom. All of these micro compact 9’s are snappy and I’ve shot the Springfield Armory Hellcat. Like 10,000 rounds a lot, and you can watch that here.

Was it any less or more snappy than the other micro company 9’s that I’ve shot? Not that I could tell. I wanted to get the MantisX on it for the recoil analysis but I didn’t have a new magazine adapter for it so I pulled one off another mag I had. That’s obviously didn’t work well at all. You’ll have to watch the video for that blooper.

But like I said, these guns are snappy but you still have enough there to hold on to, control the recoil and get your sights back on target quickly unlike the smaller 9’s and 380’s “pocket pistols” which I never liked.

Watch the video to see a slow-mo clip of David and me shooting it to get a better look at the recoil and us getting it back on target. Not bad at all.

The trigger is flat-faced and it does have a trigger safety on it. Some people like it, some people hate it. Personally, I’ve never had an issue with them so it doesn’t bother me at all. What I noticed about this one is the blade safety is wider than the one on the Springfield Armory Hellcat and it also has some texture lines or serrations running down it to give you a better grip or prevent your finger from sliding.

Now, I’ve said it before that I’m not a trigger snob. I don’t replace triggers in any of my guns. I don’t switch carry guns often at all so I just train with what I’m carrying and that it. Now have I shot guns that I hated the triggers on? Sure have. I’ll say that the GX4 does seem to have a very nice trigger and reset on it. It has a clear wall you hit after the reset. It has a nice clean break, short reset. I like it.

As for the sights, it comes with a front sight with a white dot and blacked-out rear sights. David and I were discussing the gun and he mentioned he liked that they didn’t go with two dots in the rear as well. Unless you are looking for night sights, I think these sights are good to go out of the box, and no need to replace them.

But on that note, I was a little bummed that it wasn’t cut for an optic yet. I wish all new pistols would come with that option. Apparently, there are plans for optic-ready slides so we shall see. I’m 42 going on 43 this year and since I hit 40, my eyesight has taken a dive. It sucks getting old. But having a red dot helps me with that so I want red dots on all my guns.

The grip texture has that microdot texture or whatever you want to call it. It is similar to what you’re seeing on all of the other Micro-Compact 9s. I like that texture and as you can see it was pretty hot and I didn’t feel like I had any problems gripping the gun with my sweaty hands. I can’t tell if the texture is different on the front and back versus the sides or if it is just a color difference. 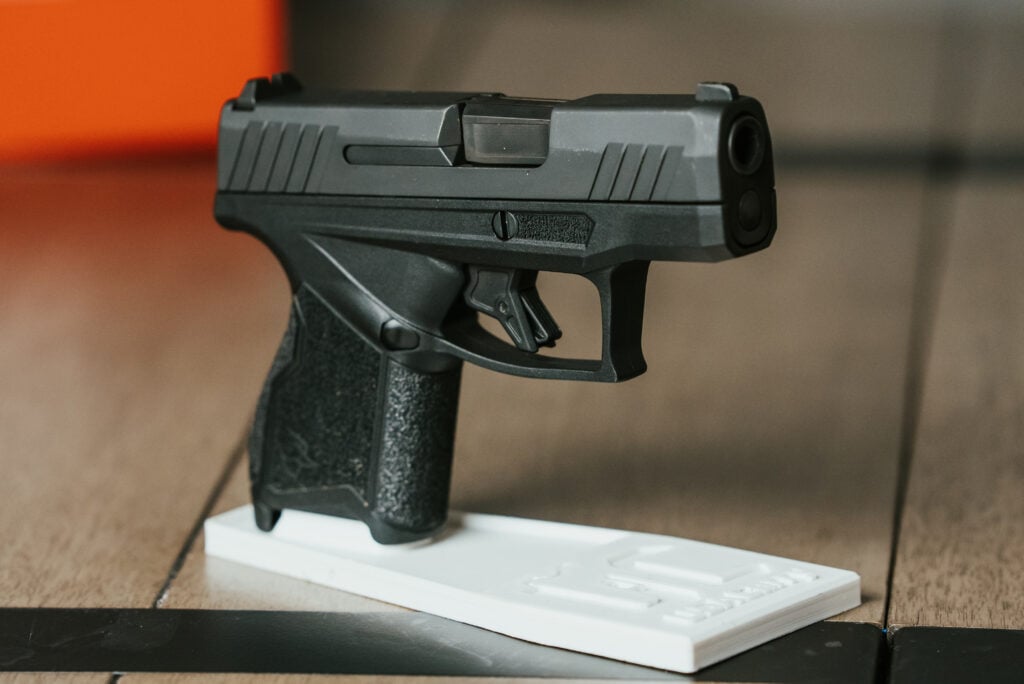 Some other features are the cuts in the magazine and the grip for stripping mags. The takedown is super easy. At first, I didn’t like the fact that I had to have a tool to take it down but all you need is a flat head screwdriver or something else that is flat. You do have to press the trigger so make sure it isn’t loaded and then once you turn the takedown pin, the slide just slides right off. Then you just put the slide back on, lock it to the rear, and release and your good to go as long as the take-down pin slot is vertical. Every time I’ve done it, it sets itself back to the vertical position. The mag release is also reversible.

Overall, How Did the Taurus GX4 Shoot? 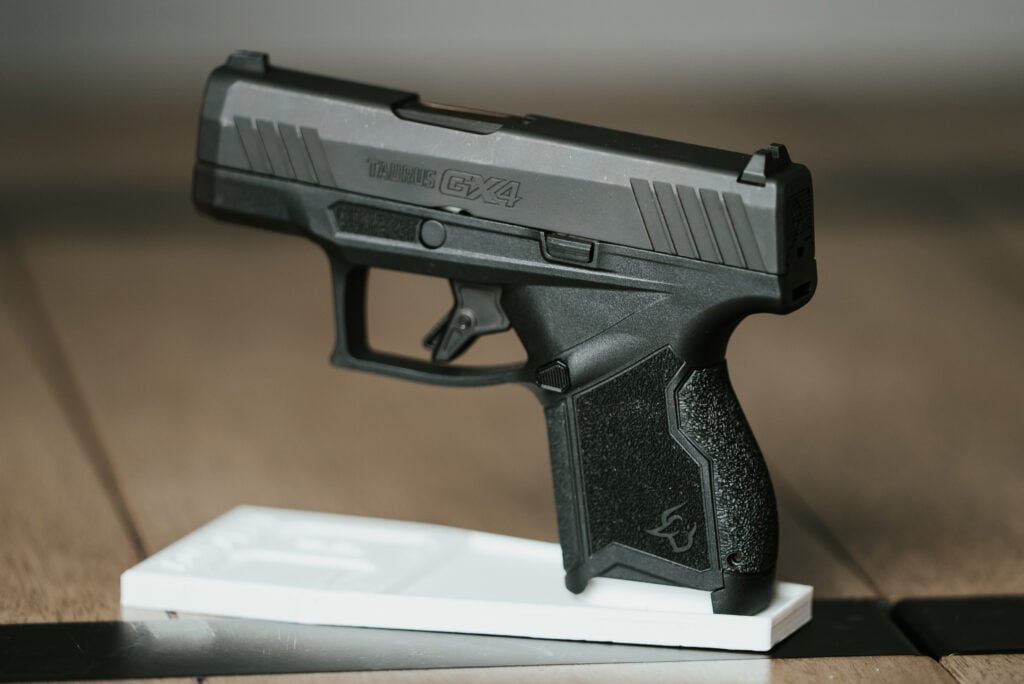 In total, we shot about 600 rounds through it. David and I shot a little over 300 and then I got to the range a couple of days later and put roughly another 300 rounds through it. I didn’t have one single malfunction. I like to put at least 1,000 rounds through a gun when I’m reviewing it but with the ammo prices being high, I only ran 600 through this one. This obviously isn’t a long-term review but I’m very happy with how this gun shoots, handles, and how it ran flawlessly. Most of the ammo I put through it was CCI Blazer Brass but I also shot some steel case ammo and some different hollow points through it with no issues.

Would I rely on this gun to carry? I’d say yes but I’d need to get a bit more rounds through it but it seems like a pretty solid gun from Taurus.

2 Things I Liked About the Taurus GX4 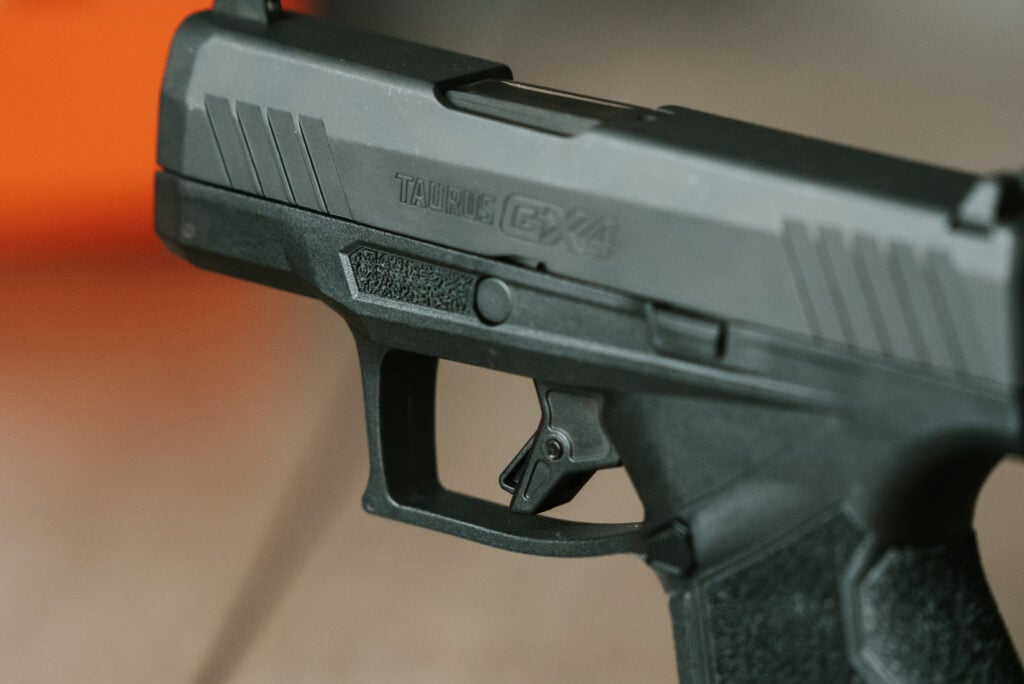 Some things that stand out that I like is, I hate to say it, how it feels in my hand. Specifically, how my thumb rides the slide. I explain this more in the video but having a flat surface with some slipping feels better than the other micro compact 9’s. That is just my personal opinion of course. These guns are very similar in size so it’ll the little things that will stand out.

I like that I can get an ALMOST full grip on it or at least get my pinky in there without a pinky extension but I’d still run on this. They didn’t have them when I got the gun but you can buy them now.

And just to add a couple of things I don’t like and I’m really just nit-picking here is that there’s no optic cut, which we already discussed, and that it doesn’t come with a pinky extension. Those are really the only things I could think of that I didn’t like.

So, I think Taurus has a winner on their hands with the GX4. I think it is definitely a solid option if you are looking at getting a micro compact 9 and coming in at an MSRP of $392.42, that’s kinda hard to beat.