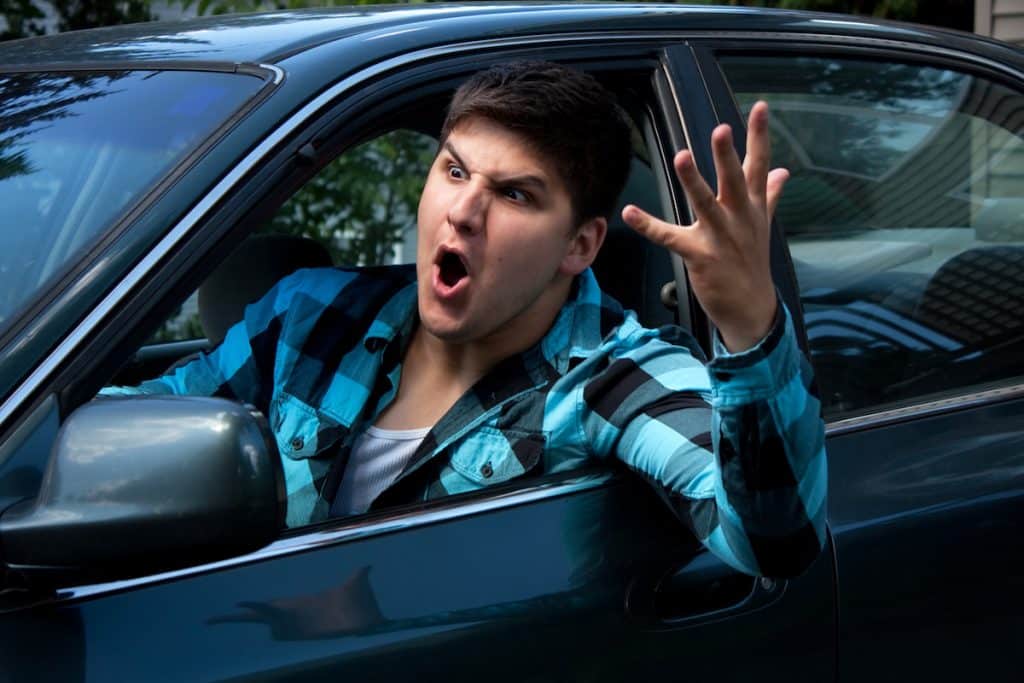 Just because I’m a concealed carrier doesn’t mean I stopped running into jerks. The problem with being assertive is that there’s always a chance that the person will react aggressively or negatively. I’ll give an example from my own life.

Fair note: I hate the holiday season. From the period of November to just after New Year’s, I do my very best to avoid crowded areas like the mall, outlet stores, etc. The reason for this is simple: people are dumb. Individuals are smart, but people are dumb.

And holidays tend to stress people out rather than make them all cheery and festive. I don’t know why that is.

In either case, I was about to pull into a spot at the grocery store and a middle-aged woman in a huge pick-up truck slams across two spots — including the one I intended to pull into. She leaves her truck running and goes inside the store.

I find another parking spot. I’m miffed, obviously, but there’s no reason to make a big deal about it.

The grocery store is packed. I go about my shopping. Around Aisle 13, the paper towels aisle, I notice the same woman just casually browsing the aisles. I thought, in my mind, the only reason I would leave a $50,000 truck running, parked across two parking spaces, is obviously there’s an emergency that I can only fix with two bottles of discount red wine.

Turns out, this is maybe a normal thing?

As I get ready to pass her, I asked her if she drove a truck matching the description of the truck I obviously saw her depart. She looked at me with bewilderment and said, ‘yes?’

I asked her why she thought it necessary to park across two whole parking spots and leave her truck running.

She looked at me like she had never once thought about this before.

I shook my head and left. I didn’t say anything mean — I simply asked her why she thought her behavior was acceptable.

As I’m getting ready to check out, I get a firm pat on the shoulder. I figure it’s someone I know from town who recognized me in the grocery store. I turn around to face a complete stranger. It’s a guy. He looks like he’s in his late 20s and I don’t know him from Adam.

“My mom didn’t like what you said to her.”

Feeling a bit of unnecessary tension in the checkout line, I tried to move it along.

“Maybe you could show her how to park her truck next time.”

I turned back around and looked at the cashier, who seems a little worried because obviously, the interaction appears a bit cold and less than holiday cheery. I kept the small line of groceries moving, smiled at her and asked how her holiday was going. She smiled nervously.

“Keep your mouth shut,” the guy said, and I couldn’t help but look him dead in the eye at that point. It was clear his mom is out to lunch, and his son wasn’t far behind. There’s no need to make this a huge thing in the middle of a grocery store.

Just because I’m a concealed carrier doesn’t mean I won’t run into jerks. I can still stand up for what I think is important but it’s also important to de-escalate whenever possible. That said, there were a few choice things I had at the tip of my tongue that I had to bite back.

I paid for my groceries and walked to my car. The guy didn’t follow me outside — at least that I saw — and there was no further interaction. Sure, my blood was a bit hot. That’s life. But overall, I’ll chalk it up to dealing with jerks is part and parcel of living in society. In hindsight, I should have never said anything in the first place As a concealed carrier, we keep it calm and move along until there’s real trouble.