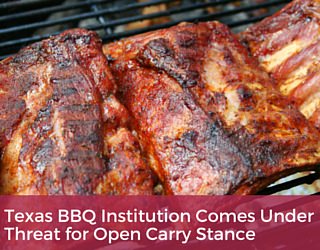 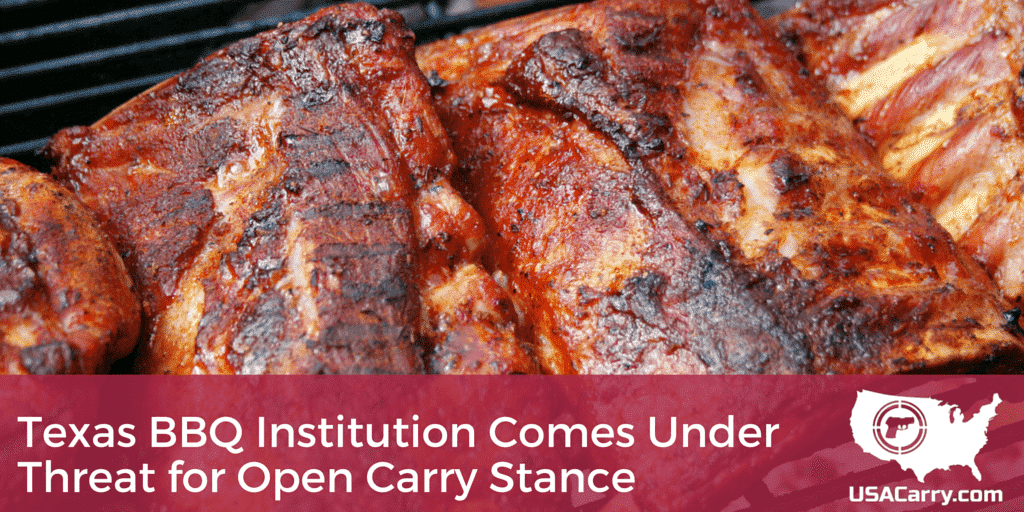 Brooks’ Place BBQ has been serving some of the best smoked meat in Texas since 2009. Recently, however, the famed eatery has come under threat due to the owner’s support of the Second Amendment.

Texas’s legislature and governor approved changes to state law allowing for open carry of handguns by citizens with concealed carry permits and carry on some campuses. In response Trent Brooks, owner and founder of Brooks’ Place, decided to celebrate the ruling. He did so by offering a discount for customers carrying either openly or concealed.  In general, the response was positive; on the first day the discount was offered 45 gun owners enjoyed a reduced price on Brooks’ acclaimed cuisine.  Things took an ugly turn on Thursday, January 7th, when a Facebook user writing under the name Scott Layden posted the following message on the business’s page:

I’ll shoot up the place on Saturday. Let’s see how your gun toting patrons will stop me.

Brooks’ Place responded on Facebook with the following brief statement:

We received this about 3 hours ago. FYI – We will not be closed this Saturday or any other Saturday. We do not think this is a legitimate threat but unfortunately as we know craziness and evil does exist. SO WE ARE AND WILL BE OPEN. Thank you!

At the time of this writing, crowds of supporters are enjoying Trent Brooks’s award winning BBQ, which has consistently earned him a spot on Alison Cook’s Top 100 Houston Restaurants for three years running. In a statement to the Houston Chronicle, Brooks had this to say:

“I support the Second Amendment. It creates a safer environment for someone dining here – if there was ever someone trying to rob us – or rob our patrons – they’d walk in here, see people with guns. That should be a deterrent.”

With security on high alert we want to thank everyone for the protection of Brooks’ Place and everyone that came out to be a part of history. THIS IS TEXAS and from what we saw today the message is clear. It’s not about GUNS, it’s about PROTECTION and RIGHTS. They came from near and far to get good food. And we hope you all enjoyed your visit. If not, don’t let today be your last time.

Thank you to the HCSO who was there when I arrived at 2:30am and were on patrol throughout the day.

Thank you all!!! We will keep you updated on the investigation should we hear anything.

WELL OVER 100 GUNS IN ONE PLACE…AND NO ONE WAS IN DANGER, HURT OR OTHERWISE!!!

Was wondering the same thing.

I’m sorry, what was the threat here? Some faceless, anonymous Facebook poster threatens a famous Texas BBQ place whose owner supports the 2nd Ammendment and whose patrons carry guns and law enforcement patrols nearby all day. Again, what was the threat?

Are you daft? The threat was to “shoot the place up”, it’s the same as if some “faceless, anonymous fb poster” posted they were going to “shoot up” a government office/the wh, a military recruiting office/baase or a police station.

Perhaps the meaning of my post wasn’t clear. That was an “empty” threat in that any fool who would threaten to “shoot the place up” with a bunch of Texas gun totin’ patrons inside and cops nearby, is a fool indeed.

Here is your huckleberry:

“I’ll shoot up the place on Saturday. Let’s see how your gun toting patrons will stop me.”

That’s a clear and concise threat directed towards an identified target and persons. Certainly I would have reported it to the local authorities, regardless of the assessment as to whether or not the person posting it had the ability to carry it out, ie, lives in another state.