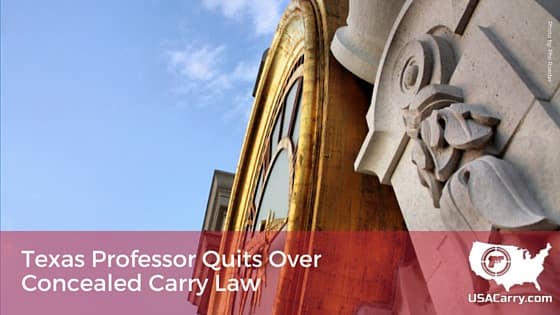 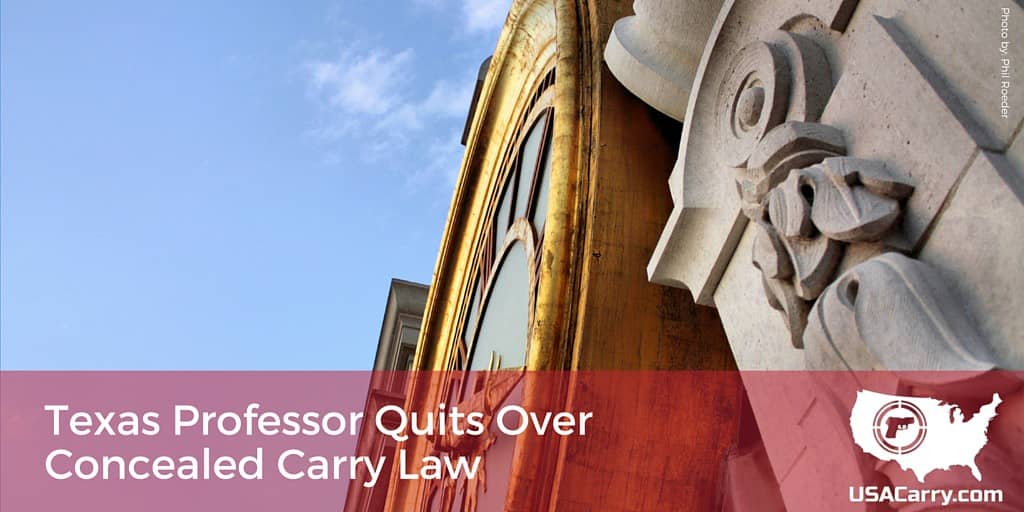 Texas’s Campus Carry Law goes into effect on August 1, 2016.  It changes state regulation of concealed carry, allowing—with some exceptions—students and faculty who have a concealed carry license to carry a concealed handgun on college and university campuses and in classrooms. Previously, the possession of a firearm had been prohibited on campus, with or without a permit.

And at least one professor isn’t happy about it.

“With a huge group of students, my perception is that the risk that a disgruntled student might bring a gun into the classroom and start shooting at me has been substantially enhanced by the concealed-carry law,” said Daniel Hamermesh, Professor Emeritus of economics at the University of Texas.

He went on to speculate about the impact the law might have on the university’s efforts to recruit new faculty.

“My guess is somebody thinking about coming to Texas is going to think twice about being a professor here,” Professor Hamermesh wrote in a letter to UT President Gregory Fenves. “It’s going to make it more difficult for Texas to compete in the market for faculty.”

What actual effect it has on campus safety has yet to be seen.

That’s one way to get snotty self serving liberals and lying socialists out of college campuses!

My bet is he’s an awful human being, if he’s worried about a disgruntled student… Be nice to people you liberal fool, and you wouldn’t need to worry about this!

Kudos Texas! You’re on your way to saving more lives than you know!

Here is a topmost method how U can~ make ninty-seven bucks /hr… After searching and doing research for a job that suits me for half a year , I started working over this internet-site and now I could not be more happy . After 4 months on my new job my income is around $5500-per month If this interests you: 1)navigate to the site link in the description

Scam alert they only make a few dollars posting
this scam. That is why the website is different it is how they prove they
posted it. Would you encourage competition if you were making that kind of
money?

Here is something to pay attention , a great opportunity for work for those who want to use their free time to make money using their computers… I have been doing this since last two years and I am making 40 to 70 dollars per hour … In the last week I have made 12,245 for almost 18 hours sitting ….

?There are no special skills required just basic typing and an internet connection ….

?There are no time constraints … You may do this any time when you are free ….

?Here is what I’ve been doing….

Scam alert they only make a few dollars posting
this scam. That is why the website is different it is how they prove they
posted it. Would you encourage competition if you were making that kind of
money?

These are really liberal trolls spamming here, trying to get us to not post or even read what goes on.
If you flag them enough, they will be removed and eventually their account will be closed. It’s worth hitting the flag button.

F*CK OFF AND STOP SPAMMING THESE SITES YOU B*TCH.

This is something very interesting that is worth paying your extreme attention ,a very good chance to work for those people who want to use their free time so that they can make some extra money using their computers… I have been working on this for last two and half years and I am earning 60-90 dollar/ hour … In the past week I have earned 13,70 dollars for almost 20 hours sitting ….

Any special qualification, degree or skills is not necessary for this, just keyboard typing and a good working and reliable internet connection ….

Not any Time limitations to start work … You may do this work at any time when you willing to do it ….

Just know how I have been doing this…..….see this (webiste-Iink) on my !profile!` to know how I am working` on this`

LIving in Texas I’m hearing a large number of “profs” (I remind you Obie is one, so it has no standing in my opinion) and teachers are pushing back on this wonderful gun law. They would rather die at the hand of a serial, mass murderer, than be defended by a patriot student or teacher. I can tell you its mostly the out of state, yankee, usually female, suck up profs that are complainiing. There is truly something insane about liberals. Its a genetic thing. They almost never change their mind. I say good riddance to this coward, and suggest he teach in a way that doesn’t make his students want to shoot him. This could be the cure for arrogant, condescending teachers of all kinds. GOD BLESS TEXAS.

I gave you a thumbs up, BUT you don’t need to be claiming them as Yankees. You have plenty of libs in your city down there that were born there. There is also plenty of northern states that are pro-gun and more lenient than Texas. So you might want to refrain your stereo typing. Texas would NEVER survive on its own. GOD BLESS AMERICA!!!

Hamermesh’s communication sends the message that the writer is illogical and insecure. UT is most likely better off without him.

Good. We need less Libs teaching our students and more people with a grounding in reality.

There is an good idea how it’s possible to make ninty-five dollars every hour… After being without work for six months , I started earning over this internet site and today I could not be more happy . 3 months have passed since being on my new job and my income is around five thousand bucksper month If this interests you: 1)navigate to the website link in the description

Obviously does not like his student otherwise he would trust them.

It’s funny fox picked up the story, then infowars. But we read about it here first.

Don’t let the door pinch your tail on the way out, perfessor.

Good, glad to be rid of him and folks like him.

Classic example of someone who is over educated with no common sense! If a student wanted to kill him with a gun,the student wouldnt care if there was a law prohibiting it! On the other hand if said student came in threatening,perhaps a good guy carrying would take him out prior to the carnage ir at least lessen the toll.

The dumbass is to stupid to realize that if someone was going to come to his classroom to shoot him that they wouldn’t have waited until he could legally bring one in there.

The Liberal dream of gun control exists. It existed on the campus in Oregon. Every gun free school is the utopia the left wants! It exists in almost every school and pro football game in this country. Every one of them is a gun-free zone. It’s exactly what the Liberals want, there aren’t any guns… in the hands of good people. So how’s that gun free UTOPIA working out for you? Liberalism, opposes self-defense in principle. It opposes any attempt to empower potential victims. It opposes any real effort to take power away from the bad guy by giving it to his would-be prey. It thinks victimhood is an ideal, not something to be defended against. It wants you to be a victim. Plain and simple. And this is what really drives their outrage in these situations. So, there’s a mass murderer in your classroom, and you don’t want anyone to try and shoot back at him? You’d rather he mow you all down? You’d rather sit there helplessly while
he ushers you into the middle of the room and systematically executes you? This is the sort of thought process liberalism encourages. Better to be a victim, liberalism says. Better to die quietly.

So if he’s so worried about a student shooting him because he makes them mad, I’d have to ask how many times he’s been punched in the face or otherwise attacked by a pissed off student, because if the answer is Zero (and I’m sure it is) then he’s outta his mind (and I’m sure he is) if he thinks that a student is going to attack him just because they can now carry a firearm.

The College Professor; stating “with the risk of having a student shoot at him in class I’m leaving” Well Professor if your classes are boring maybe they will! LOL LOL! Thanks for leaving – Professor and don’t let the door hit you in your behind!