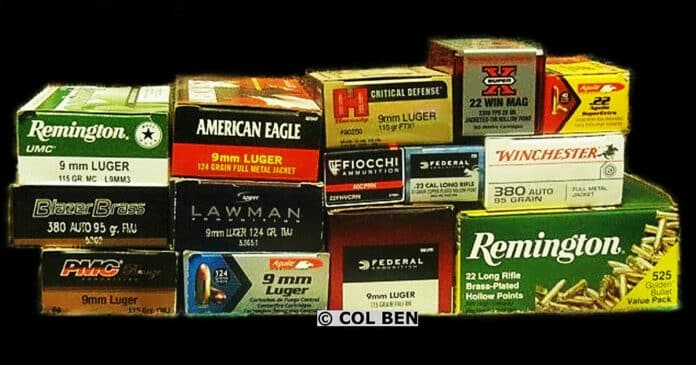 It is important to recognize that “old” ammo is not necessarily “bad” ammo to shoot.  Of course, any ammo could be both old and bad and should not be shot. While shooting or using old ammo may be an option, shooting bad ammo is definitely not an option at all. So we must define “bad” ammo and its characteristics, so we will know what to look for, can recognize it, and, thus, not shoot it. And we must also know how to prevent good ammo from becoming bad ammo, by properly storing the rounds.

These above ideas lead us to some questions we must understand the answers to, for our safety and for using reliable and effective ammo. Here are seven basic questions I will hopefully help answer for you, so you can recognize old and/or bad ammo, safely use old and good ammo, properly store ammo, and dispose of bad ammo.

One day while teaching our basic handgun skills class at the range a very elderly lady student came up to me and asked if her recently-deceased husband’s old .22 LR ammo would be safe to shoot or should she dispose of it. In her car, she had a container of several hundred rounds in the original boxes, some with early 1930s dates, so I checked them out. When I saw them and opened the old and worn boxes, it was as if every round was newly packaged in cosmoline, although they were just slightly a little dull in color. There were no water damages or stains, no corrosion at all, no bent bullets or cases, no cracked cases, no external damages, no bullet setbacks down in the cases, no white chalky marks, and no rust whatsoever. I told her it is best if I shoot a few rounds just to make certain they were safe to fire. I wanted to make certain almost all of the cosmoline was off them, since they might seize the firing pin or “bake-in” the waxy grease. So I wiped it off.

I knew the old rounds were fine, but I wanted to assure her that they were safe for her to shoot. After a few rounds, I told her they were reliable, safe, and fine to shoot, after wiping off the cosmoline. She had so much fun shooting about 300 rounds of that ammo. Usually, if none of those telltale signs of bad ammo are present, old ammo is fine to shoot, even if they are decades old. So, know the signs and characteristics of “bad” ammo.

It is important to know the seven signs of “bad” ammo:

There are four major problem areas to be aware of when storing ammo:

Ammo stored inside a vehicle will usually not get hot enough to explode, even in extremely hot climates. The ammo might degrade, however, and not be reliable. And if stored in sealed metal containers may explode in a very intense fire, since most are not fireproof and metal conducts heat. If ignited by intense heat, the brass or plastic cartridge case will burst and the particles will usually not travel very far.

Bullets are inert lead, brass, copper, or metal and do not spontaneously explode… usually. For a round to go off and explode, the primer would have to be impacted hard enough to set it off.

Here are seven suggestions for properly disposing of bad ammo. Disposal of bad ammo varies significantly from city to city, from county to county, from police or sheriff’s department, and from range and fire department to another. Safety is the number one concern, so if there are any personal doubts whatsoever about using bad or questionable ammo, do not use it and properly dispose of it. Do not bury it or just throw it as is in the trash.

1. Do not take your bad ammo to the landfill because they do not want the possibility of it being set off from the pressure of compacting it. And there may be specific local and state laws affecting its disposal. Throwing away lead and not being concerned about its possible negative effects on the environment can be huge problems. Of course, the quantity to be disposed of is also a concern, i.e. one box versus 100 boxes. And many have suggested to me to not bury the ammo

2. Taking the ammo to a shooting range for disposal is a possibility. Some ranges have “Dud or Bad Ammo” boxes to place it in for later proper disposal, while others do not. Speaking as a Range Safety Officer, I know and so do my fellow range officers that we do not want bad ammo shot at the range because if there is even a slight chance of someone getting injured it is not worth it.

3. Most local police and sheriff’s departments have commercial contracts for ammo disposal. Some even have a day every year for local residents to bring their ammo in so it can be properly disposed of for safety concerns. Some law enforcement departments might even welcome the bad ammo, so their bomb disposal team can have it for closely-monitored safe disposal practices. However, these commercial disposal contracts they use are not free and some departments may not accept your bad ammo.

4. Some local landfills and powder waste management facilities have a hazardous waste/materials drop-off. So primers and powder can be dropped off. Check locally.

5. Municipal and county fire stations might also accept ammo for disposal, but I checked some and several do not. But, it might be a possibility in your area, so check locally.

6. Those shooters with handloading skills, proper equipment, and experiences can disassemble and re-use certain component cartridge parts. Some use a bullet puller tool to take the bullet from the case. Usually, the bullet and case can be re-used, but primers and powder may not and there are other considerations.

7. Shooters can disable the rounds and there are several techniques suggested for this, but little universal agreement. Some say to soak the round in water and motor oil for three or four days, so the primer and powder are destroyed. Others say this may not work over the long run because the components might possibly dry out over an extended time period. Still, others say the primer can be disabled by using WD-40, but I have no recommendation for this or any of the ways for disabling rounds. I simply do not want to take any chance of myself or anyone possibly being injured in any way. I just fork over the bucks for the new ammo… if I can find it now.

Old ammo is different from bad ammo. Most old ammo is safe and reliable to shoot if stored properly. Be sure to know the seven telltale signs and characteristics of bad ammo, like bent bullets and cases and bullet setbacks. Also, know the four major problem areas to be aware of when storing ammo, like temperature extremes, moisture, and water. Common household products, like ammonia, vinegar, cleaners, paints, oils, acetone, and other chemicals can cause nearby ammo to degrade and become unreliable. It is very important to know how to properly store ammo, like in a cool, dry, well-ventilated area out of direct sunlight, while avoiding extreme temperature fluctuations. Inexpensive desiccants, like silica gel packs, can absorb moisture and keep your ammo dry. Do not store ammo near heat or chemicals and avoid water exposure.

Be Safe and “keep your powder dry” friends, as Oliver Cromwell said at the Battle of Edgehill in 1642!

* This personal opinion article is meant for general information & educational purposes only and the author strongly recommends that you seek counsel from an attorney for legal advice and your own personal certified weapons trainer for proper guidance about shooting & using YOUR firearms, self-defense, and concealed carry. It should not be relied upon as accurate for all shooters & the author assumes no responsibility for anyone’s use of the information and shall not be liable for any improper or incorrect use of the information or any damages or injuries incurred whatsoever.

© 2021 Col Benjamin Findley. All Rights Reserved. This article may not be reprinted or reproduced in whole or in part by mechanical means, photocopying, electronic reproduction, scanning, or any other means without prior written permission. For copyright information, contact Col Ben Findley at ColBFF@gmail.com.