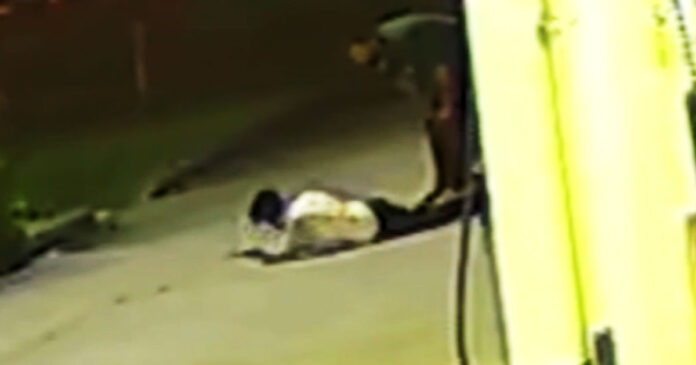 A person was walking into a Shell gas station Wednesday evening and was approached by an armed robber who had just gotten out of a vehicle. The suspect walked up to the victim, lifted his shirt to expose a gun, and demanded that the victim hand over his belongings.

The victim pulled out his handgun to defend himself and shot the robber one time in the face. It appears in the video that the victim’s gun was concealed in his front right-hand pocket. The suspect immediately fell to the ground and emergency personal showed up minutes later.

“He was shot in the face one time. He’s at the hospital. He’s going to live. He’s conscious and breathing right now,” said Lieutenant R. Willkens from the Houston Police Department.

The victim does not have any criminal history and is cooperating with the police. The police said the victim acted in self-defense and would not be charged.

“He’s being extremely cooperative. He has no criminal history whatsoever,” Willkens said.

Texas recently passed a controversial permitless carry gun law that went into effect on September the 1st. Texans are now allowed to carry a handgun without a license or training, which supporters said removed an unfair burden on gun owners. The victim’s gun was concealed in this incident, but it would have been legal to have it in plain sight. Many states do not allow open carry.

Gov.Abbott said, “Politicians from the federal level to the local level have threatened to take guns from law-abiding citizens — but we will not let that happen in Texas,” he added “Texas will always be the leader in defending the Second Amendment, which is why we built a barrier around gun rights this session.”

Fortunately, the victim came out on top because he was allowed to carry a gun.