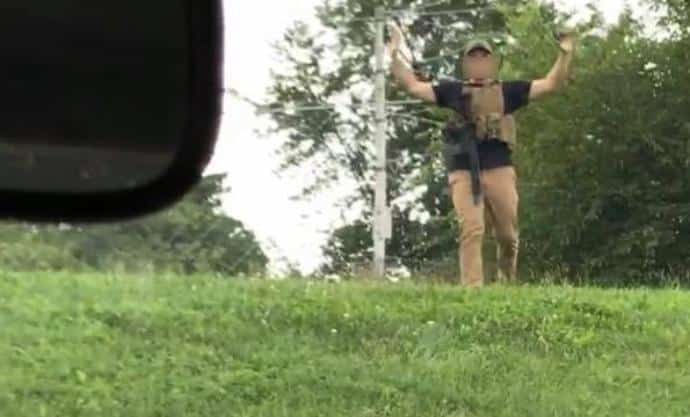 Walmart is once again in the news this morning. A man in his twenties strolled into a  Springfield, MO Walmart Neighborhood Market yesterday afternoon. In case you don’t know, these are more like grocery stores instead of full-blown Walmarts.

The man had a rifle, pistol, body armor and over 100 rounds of ammo. He was apparently live streaming on his phone while talking to other shoppers and walking up and down the store isles.

This understandably caused panic amongst shoppers and Walmart employes due to the mass casualty incidents that happened last weekend, once being in a Walmart. So a Walmart employee pulled a fire alarm and urged shoppers to leave the store.

The suspect in question fled through a fire exit but was greeted by a former firefighter and a gun. The firefighter held the suspect at gunpoint until police arrived.

Luckily, no shots were fired by anyone, and the man was taken into custody. But it is unclear what the charges are at this point. Open Carry is legal in Missouri, and it is also a constitutional carry state. This means that you can carry a gun, concealed or out in the open, without any permit or license.

Lieutenant Mike Lucas said it was clear the man’s intent was to cause chaos, saying in part, “His intent was not to cause peace or comfort…He’s lucky he’s alive still, to be honest.” Source: KY3.COM

While we wait for more details about this incident, it is unclear what the man’s intentions were. Was he planning on causing another mass casualty incident? Was he trying to become the next internet star by freaking people out because he had a rifle, pistol and body armor? Of was he doing one of those “2nd Amendment Checks” that we’ve seen some open carry advocates do?

And if it was later, this is why that is just a bad idea in my opinion. While I think open carry should be legal, I personally don’t ever open carry unless I am in the woods. We’ve all heard the cases for an against open carry. I often see at least one person open carrying when I go to my local Home Depot. Not sure what it is about Home Depot that brings them out but I notice at least 50% of the time. But that doesn’t cause a panic because it is somewhat normal in my area.

The problem arises when it ISN’T common. I think that doing these “2nd Amendment Checks” where you are walking around with a rifle just to freak people out serve no purpose and doesn’t do anyone any good. And as soon as I saw this news report, I thought of a video I watched recently from Caleb Giddings, “5 Open Carry Myths Busted.”