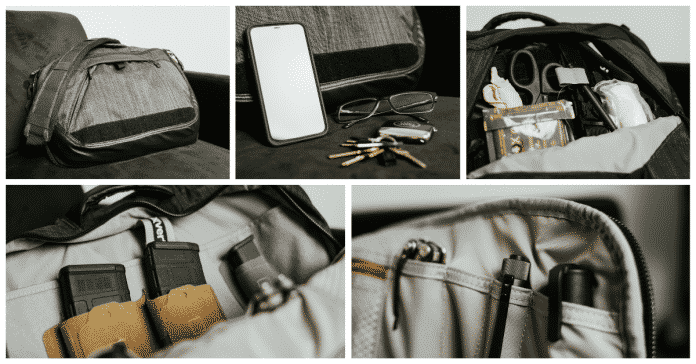 Responding to the proverbial bump in the night can be quite a bit more involved than most people realize. The variety of circumstances that might get us out of bed can go far beyond responding to a deadly threat that has breached a portal and entered the home.

Have you ever responded to a pounding on your door at 3 am, only to discover it is a police officer or firefighter notifying you that something is happening, such as a fire on your block?

Have you ever woken to the sound of your teenage son, or a brother-in-law, getting into a heated argument, or a fistfight, in front of your house with a drunken guest at your neighbor’s party?

These are all circumstances in which responding appropriately will involve more than meeting a deadly threat with guns blazing. These scenarios are also more likely.

Such circumstances may still require gear, but perhaps gear beyond just your home defense gun. Here I will offer the other gear to consider for home defense, as well as a means of instantly putting on this gear so that you can carry it. When we sleep we usually don’t wear equipment on our person. And most of us do not go to bed dressed in pants with a belt. I suggest staging clothing so that you can dress quickly, but that is a different conversation. Here we analyze the ability to quickly put on the gear you need to respond to a lethal, or non-lethal, disruption in the middle of the night.

One possible solution that some people use is a battle belt. A battle belt can be kept next to your bed and can be put on fairly rapidly, and it can have a holster for your handgun, spare magazines, and a variety of other gear already on the belt. I personally don’t like this option for two reasons. First, they still take more time to put on than most people realize. Fiddling with a belt buckle in the dark might lead to a delay in your response. Second, if you need to respond to something outside the home, or even at the door, concealment is not an option unless you put on a concealment garment, like a jacket, that will cover the battle belt. Rather, I like a sling bag that can be instantly slung over the head as you respond to the disruption.

A bag that requires only a single strap be placed over the shoulder is the fastest possible way to put on the necessary gear. My suggestion is to keep the home defense handgun separate from the bag, preferably in a quick-access safe, but the bag can hold everything else. A relatively small sling bag is in order here, but a bag that has a compartment that can accommodate the handgun itself is a good idea, as being able to quickly put the pistol in the bag, should you need to quickly conceal it, is a benefit. Again, think back to how you would want to respond to a disturbance that turns out to be something mundane rather than a deadly threat. Being able to stow the gun in the bag, but still having it quickly accessible, makes good sense.

Save 25% On All Slings and Bags from VERTX.COM – Coupon Code: USACARRY

Gear to Have in the Bag 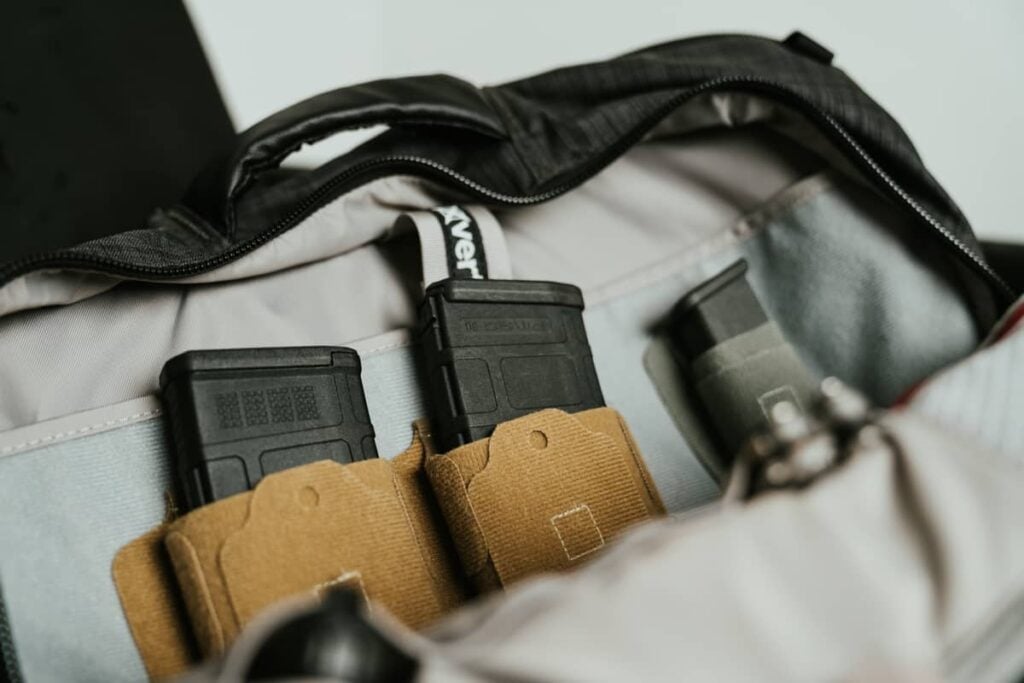 At least one spare magazine for your gun, or multiple guns. If you keep, for example, a handgun and rifle accessible for home defense, having a spare magazine for each gun in the bag makes sense so that you can reload either gun depending on what you happen to grab. If you use a shotgun or lever action rifle for home defense, having extra cartridges for the weapon within this bag is a good practice. 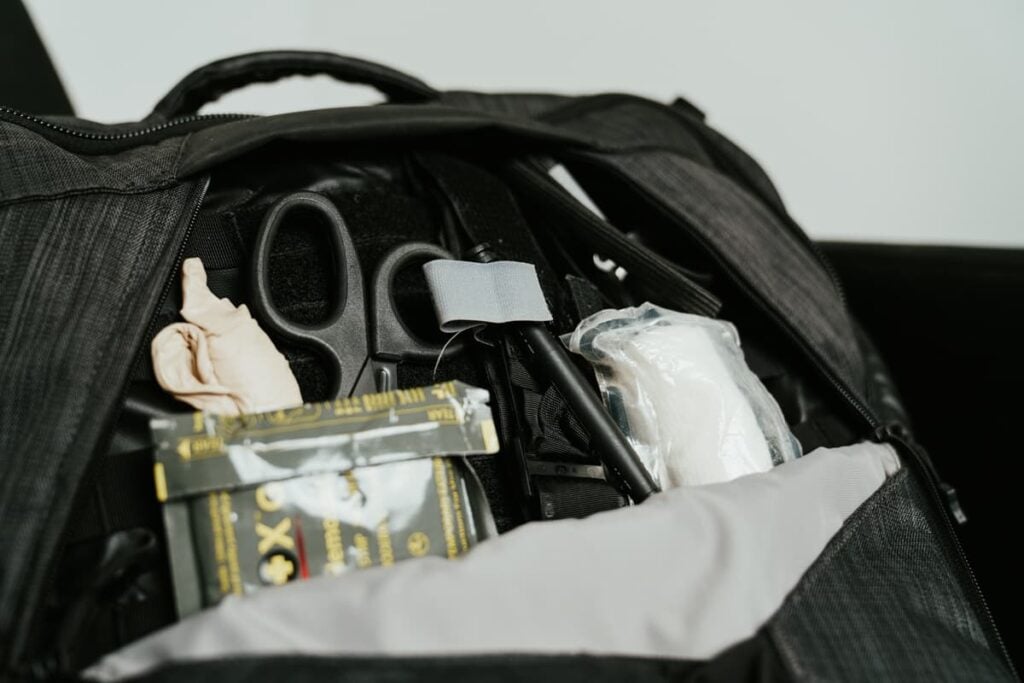 This should be rather obvious. If you need to respond to a deadly threat there is always the possibility that you or another household member will sustain an injury. Having a quickly accessible tourniquet, hemostatic gauze, pressure dressing, and chest seals, within the bag makes good sense and is a must-have. A trauma kit serves a purpose well beyond treating injury sustained in a gunfight, of course. An accident in the home, or outside of the home, may demand imitate hemorrhage control and your home defense bag can serve as a go-to option for such emergencies as well.

While a weapon-mounted light is a no-brainer for a dedicated home defense gun, a handheld light is still in order. I suggest keeping one in the bag, and preferably in a quickly accessible pocket of the bag so that you can rapidly access the light. Depending on the situation, pointing a gun at what you wish to identify may not be sound.

This may sound like an odd piece of gear pertaining to home defense, but consider that not all disruptions you may respond to require lethal force. As an example, maybe the neighbor’s drunk teenager makes it inside of your house when he presumes he is sneaking into his parent’s home. If you think that has never happened you are mistaken, such incidents have occurred surprisingly often. Perhaps upon commanding the trespasser, though not a violent intruder, to leave he becomes belligerent. A pepper-sprayed teenager is much better than a dead teenager, even if you would have the legal right to use such force. Pepper spray is in no way a substitute for having your firearm at the ready, but it serves a purpose for select circumstances and can provide a less-lethal alternative, should that prove appropriate.

Within this context, I don’t see the knife as being very relevant to defending the home, but a blade is an essential part of being prepared and when waking up out of bed you will not be wearing your knife. Suppose the emergency you responding to is not a home break-in, but a car accident in front of your house which requires cutting someone free from a stuck seatbelt? A cutting tool is simply part of being prepared. 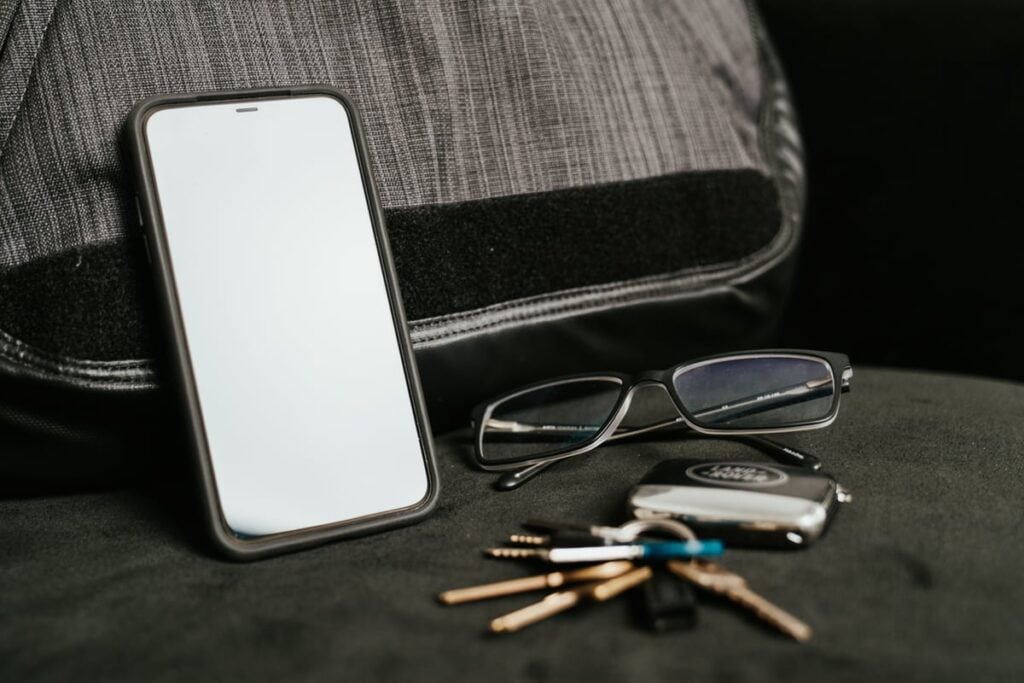 Beyond the listed gear, consider other items that might be essential to your personal circumstances. Do you wear corrective lenses? Having a spare set of glasses in this bag might be a sound decision. How about your cell phone? Depending on your family situation you may have a partner that will dial the authorities while you take action. But if not, having your phone in the bag so that it goes with you may make sense. Consider keeping a set of car keys in the bag. Should you need to immediately get in your vehicle, perhaps to rapidly flee your home or to get to a hospital, having keys in this bag may be a good idea as well.

Responding to a home defense scenario can require far more than simply moving towards the disturbance with a gun in hand, or hunkering in place with a gun in hand. There are many circumstances that may be ambiguous and require investigation and different actions. Having a sling bag, ready to go, can facilitate any needed response very quickly.