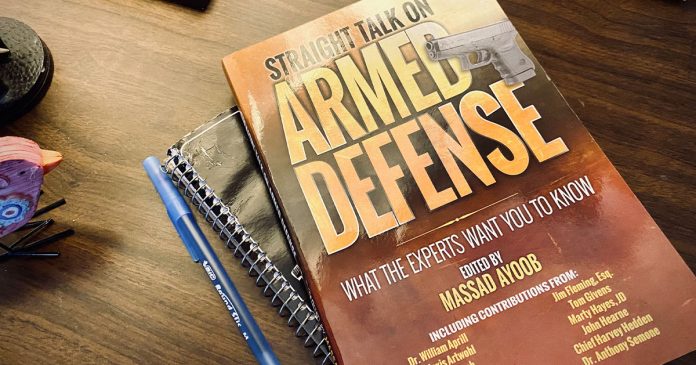 Since ammunition is expensive right now and likely to stay that way for a while, one of the other things we can do to keep our minds engaged is read books. I know in the age of the internet and YouTube videos and character limits on Twitter, reading books isn’t really a thing people do anymore. At least, most people. If you do read books, or if you would rather spend that $30 slated for your next box of 9mm on something else, Mas Ayoob’s Straight Talk on Armed Defense should be jockeying for your ammo money.

Straight Talk on Armed Defense is like a who’s who book of self-defense training. Mas is just the editor for a collection of chapters, each written by an expert on that chapter’s topic. If you have been around the personal defense training world for very long, most if not all of the names should be very familiar. Names like Tom Givens, Craig Douglas, Marty Hayes, Alexis Artwohl, William April, and of course, Mas has a chapter of his own. These are all people who would be considered experts in their field. Rarely would you find all of these people in the same place at the same time? Or even see the things they have written in the same place. Straight Talk on Armed Defense brings them all together for the reader.

That is perhaps the best thing about this book. Even though it is technically a book about a single topic, armed defense, it really isn’t. It is more like a collection of essays. The breadth of the information is extensive. Usually, this would mean the topics are lightly brushed over and that there isn’t much meat for the reader to sink their teeth into. I felt that wasn’t the case here. Even though there are obvious limitations to cramming years or even decades of experience and research into a single chapter, I was generally not left wanting as the reader. The depth was there, even if the dive was short.

The strength of the content on each topic can carry itself, but as mentioned, the breadth of the topics presented is just as critical to the value of the book. Arguably, it is the value. It covers topics from how to find good training, understanding the aftermath of a use of force (legal and psychological), understanding bad guys, and how they function. If a person were to read only one book on personal defense (for shame), I think this would be the one to read.

It is easy to go to a shooting class and learn how to shoot. It is much more difficult to learn all the non-shooting stuff there is to know about personal defense. Usually, this stuff is spread around in different instructor’s classes or books. This book brings a great deal of that information to one place. It really is a book worth reading, even if you normally don’t read books.

I’m sure this book contains a lot of “tactical” information since Massad Ayoob put it together.