There’s nothing quite like the great outdoors. Whether it’s a day hike or a week-long adventure, carrying a gun is considered a trade-off on weight versus capability. Every ounce in your pack is one more thing wearing you down, making your trip just a little bit harder. However, the safety and security of knowing you are carrying a gun may help alleviate some significant concerns many of us have when we wander out into the great outdoors.

Recently, one of our readers who’s an avid backpacker recently wrote in and wanted to give some suggestions for other backpackers. According to him, he’s hiked extensively through the Appalachians and the Rocky Mountains on multi-week long excursions. Whether or not his suggestions are worthwhile for any of our regular readers is something left up to the comments section below.

Hey, I just wanted to write in and talk a bit about my experience hiking around in the Appalachian Mountains and the Rocky Mountains with a gun. I don’t know how many of your concealed carriers would be interested, but I think I’ve got a few good suggestions which can help them keep their load light and safety strong.

Just to be specific: I’m talking about folks who plan on hiking out in the wilderness for more than three days or plan on tackling some tough, mountain terrain. If you’re just going for a stroll through your local, national forest for a day or two, whatever floats your boat is just fine and fancy.

#1: Be realistic about the threat

As cool as it would be to be prepared for everything at all times, it’s just not something I’m able to do on my long-distance hikes. When I bed down for the evening, I have to be realistic about what dangers are around. If I live in this headspace where I imagine banditos are going to descend from the rocks and raid my camp, I’m going to end up lugging a high-capacity semi-automatic rifle and plenty of ammo. Because I don’t like carrying around 30 extra pounds, I have to be honest with myself and say that this imaginary scenario either isn’t going to happen or I have to accept that I won’t be adequately equipped to handle it.

Could it happen? Sure. Is it realistic? No.

It’s far more likely I run into a dangerous encounter with a wild animal than being forced to defend myself against a group of armed thugs. In my twenty-odd years of hiking several mountains, I have yet to need to shoot another animal outside of hunting. I have only run across a few hikers that I was genuinely cautious around — and those were lone individuals at that.

So, step 1 is “be realistic about the threat.” Walking around southern Chicago and hiking up Pike’s Peak are two different animals regarding what type of gun you need to get through the situation.

Join the Discussion: How do you carry when backpacking?

#2: Choose the handgun you want to lug around wisely

I usually carry a .357 revolver (Smith & Wesson Model 586, 6″) for my non-hiking daily carry or day-pack trips. I live in southern Colorado, and I found that gun really covers the basics of what I need for a daily carry gun. However, if I’m doing the Mt. Ethel to Davis Peak range, I know it’s a heavy gun I’m not going to enjoy lugging around next to food and water.

I think the Smith & Wesson 586 weighs in around 46.3 oz unloaded. If you’re a mountaineer, you know every single last ounce counts. When I compare that against my Kahr P40, 16.8 oz, I’m looking at something about a third lighter than my normal carry gun. That’s why I started carrying the Kahr. Some other guys I know will go even lighter and go for a .380 or 9mm. I feel safe using a .40 S&W round and I just like the light frame and reliability of my Kahr. Round-for-round, quite a few .40 S&W rounds weigh just as much as .357 Magnums so if I want to keep the same function but reduce the platform size, I go with the Kahr.

This also ties back to point #1. I’m more worried about running into an animal that won’t back down.

If you do opt for the revolver, I recommend keeping those extra rounds in a small Ziploc bag and put them in a side pouch on your hiking rig. This reduces the chance that they get soaked during a downpour or fall out loose into a stream or on the trail.

If you go for the semi-auto pistol, you’ll still appreciate storing that additional magazine or two in water-tight plastic bags. Even though you could probably fire them just fine if they were soaking wet, it’s one less thing you have to worry about, and it’s a whole lot easier to find when you’re fishing a hand wildly through your pack trying to find those spare magazines.

As someone who’s dropped gear on the trail, I like to keep things waterproof, light, and secure.

Hope you got something out of my experiences and look forward to seeing some of your readers out on the trail!” 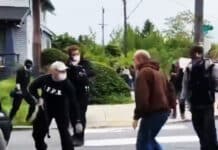 SIG Sues Springfield for Infringing on the P365 Magazine Patent

Unless I’m going to protect my self from large dangerous game, I MAY then carry a 6 inch revolver across the chest, but all else is 4″- 21/2 revolver or 5 inch or less auto. lately a heavy loaded .40 S&W 200 grain at 1000 ft sec is a fave. Hip carry for light guns. Across the chest for heavier firearms. In the Winter, which I love it’s light caliber and light guns. Long barreled ones are carried a cross draw holster.