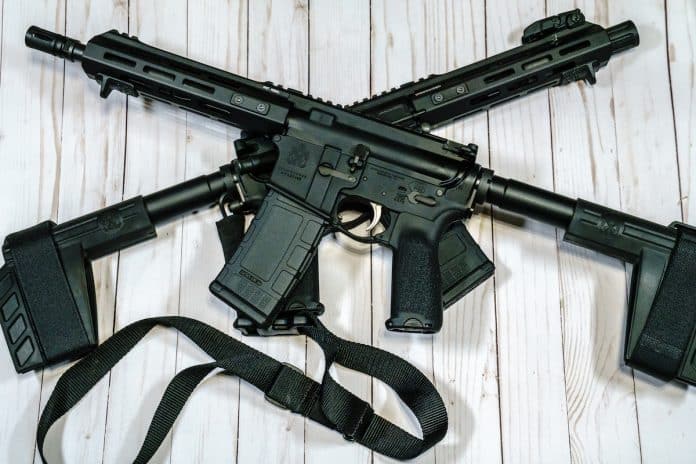 The firearms community is always rife with one trend after another in the development and adoption of new gear. In the past several years one particular platform that has exploded in popularity is the AR15 pistol. If you have considered acquiring one of these, you may wonder what the hype is, and you may be confused as to what precisely an AR pistol even is. Among all of the AR15 specific gadgetry, is an AR pistol worth having? Let’s discuss the benefits and limitations of the platform.

Legal Definition of an AR Pistol

Obviously, the AR15 in all of its machinations is a rifle and carbine platform, so how can there be such a thing as an AR15 pistol? The difference lies in the application of the National Firearms Act of 1934. With the induction of the National Firearms Act, a rifle has to have a barrel length of at least 16 inches, or it is considered a Title II weapon and requires a special tax stamp in order to own legally. While possible to get, the tax stamp takes a long time to acquire, requires an additional monitory investment, and Title II weapons are more heavily regulated than regular rifles.

Therefore, the convenience of a short barreled rifle comes with the hassle and expense of being a Title II weapon. AR15 pistols, on the other hand, are classified differently, even though they are essentially a short barreled rifle, mechanically. The primary difference, however, is that an AR pistol cannot legally have a rifle stock affixed to it. As such, this platform is considered, by law, a handgun, and treated as such.

The debate that has gone on in recent years over AR15 pistols is related to the use of the different “pistol brace” options that are available, which can mimic a stock, though a short one. Even without the use of one of these braces, the buffer tube of the AR15, which is an inherent part of the design, can be placed against the shoulder in a stock-like manner. Therefore, the argument has been, is an AR15 pistol indeed a pistol if it can be shouldered like a rifle?

Similarly, there was a good deal of debate over whether or not it was legal to shoulder an AR pistol. Several letters from the ATF have both clarified and confused the issue, but per the most recent ATF clarification, the use of a brace does not make the pistol a rifle just because it can be shouldered. Therefore, AR15 pistols are still classified differently than short barreled rifles. However, as a pistol, be familiar with the legalities of adding certain accessories that are common on rifles. For example, a vertical fore-grip is an illegal addition to an AR15 pistol. That may sound absurd, but firearms regulations are hardly a place to look for logic.

Benefits of the AR Pistol Platform

The most obvious benefit of the AR15 pistol platform is that it gives you the handiness of a short barreled rifle without needing to go through the process of acquiring a Title II weapon. Going from a 16-inch barrel down to a common pistol length such as 10.5 inches makes the gun substantially more maneuverable. Such reduced length works particularly well within vehicles or close confines. The short length of the pistol platform, which combines a short barrel with a brace or simply the bare buffer tube rather than a stock, makes the overall gun very easy to pack. These AR pistols can easily fit in a duffle bag or other luggage.

Beyond the advantage of being small, the AR pistol provides another benefit that many do not consider: it is legally a pistol. This may sound counter-intuitive as pistols are generally more restricted than rifles in many places. However, for those with a carry permit, in most shall issue states the carry permit applies to the AR pistol just as it does any other pistol. Many such states restrict the carry of a loaded rifle within a vehicle, stipulating that it must be unloaded. An AR15 pistol may prove a legal means to have a more formidable gun loaded and at the ready within a vehicle. Some states do not restrict long guns in vehicles for those with a carry permit, but in the case of those that do, the AR pistol has an advantage here. I would caution the reader, however, do not rely on the average cop to know these particular legalities. Driving with an AR pistol next to you may prove inopportune if you get pulled over.

The first disadvantage of the AR pistol platform, based on my experience with them, is that they have significantly more muzzle blast than a carbine length 16-inch gun. This is to be expected, as much of the powder from the 5.56 cartridge does not burn off within the length of these abbreviated barrels. Guns chambered in different cartridges may prove better suited for this short barrel length, obviously, but my experience lies only with the standard 5.56 chambering. Personally, I think these guns are of limited use for home defense due to this horrendous muzzle blast, unless suppressed. Despite the maneuverable size that lends itself to home defense, an AR pistol within confined quarters is a prescription for hearing damage.

The second disadvantage, compared to carbine length guns, is that the reduced barrel lengths give up a significant amount of velocity. The effective range of these guns is substantially less than the carbine or rifle equivalents. Granted, the 5.56 round is still hitting hard out of one of these guns, but the range at which the cartridge remains effective is significantly reduced.

A final downside that I will point out is that these reduced-length guns wear themselves out much faster than rifles. The gas system on these short guns are apparently much harder on the action of the AR platform. The reduced length can also make AR pistols more finicky than full-length guns, and they are notoriously less reliable if suppressed.

In closing, there is some merit to the AR pistol platform. If you are looking for a substantial gun that can more easily fit in luggage or be used in and around vehicles, it may prove a good option compared to the hassle of acquiring a Title II weapon. However, consider the downsides, as this platform does not perform at the level of the carbine or rifle length AR15s. As with anything else in the world of firearms, it is all a balancing act and a tradeoff for the features that suit your needs.

An AR pistol with a 10.5” barrel and carbine gas system is no harder on the action that a 16” barreled rifle with carbine gas system.
If on the other hand it has a pistol gas system, then it would be harder on the action.
That being said, if it is gassed appropriately, i.e. with an adjustable gas block and/or the use of a higher rated spring and heavier buffer, such that the ejection of the empty shells is between 3 and 4 o’clock with the muzzle being 12 o’clock), there will be no additional wear and tear on the firearm’s action.
Ejection of empty shells at 1 or 2 o’clock, on the other hand, will increase the wear and tear on an AR platform, because the bolt carrier group (BCG) will be slamming back into buffer extension; this is a clear indication of over gassing or under buffering, or both.
I learned this the hard way; I have an AR that was generally of high quality, except for the gas block and gas tube which were leaking gas, making it fail to lock the action open on an empty mag sometimes. So I installed a (non-adjustable) high quality gas block, and suddenly it was ejecting at 1 o’clock, and the BCG made visible dents in the threading of the buffer tube. So I had to install an adjustable gas block (the best available is the clamp on Superlative Arms adjustable gas block), and that allowed to adjust the gas to achieve ejection between 3 and 4 o’clock.

Thank you for this article . Have been looking everywhere on the classification of AR pistols. I just bought an M&P15-22 pistol online and wanted to know of any ramifications that might occur.

what about putting a 12.5 barrel on 556 ar pistol. is that even legal? just curious about shortening or lengthing the ar pistol. could you also shorten

No answer! Seems to a lot of this!!! No article or blog says if you can or not. I want to put an 11.5 on my build. I can’t find any information if is legal or not.

The barrel has to be16″ long minimum. No wiggle room at all.