As the weather and your wardrobe changes, it is important to put in extra practice for your draw. Changes in your clothing and carry setup can be deceptively difficult in keeping your draw smooth and fast. Be sure to train in all your different winter outfits! 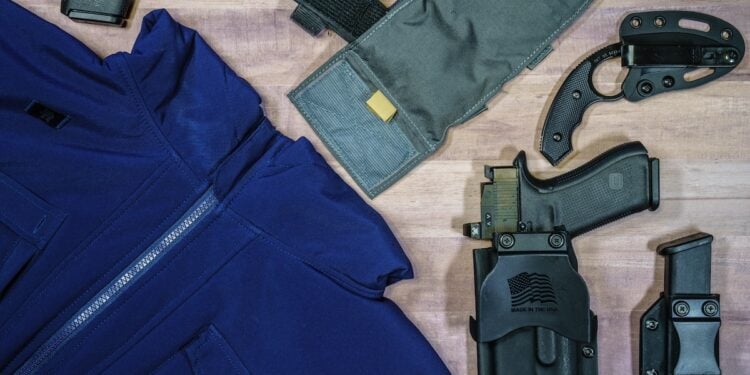 Autumn is upon us, though it is still in the 90s here in Louisiana at the time of this writing. Whether the weather is already starting to cool off where you live, or if you still have a little while, the changing of seasons is always a topic of interest in the concealed carry community.

Many people use the cooler weather and the heavier clothing that comes with it, as an opportunity to change their carry setup in favor of a larger gun. Most people are more easily able to carry a large gun under a winter coat than a summer shirt. A bigger gun is better than a smaller one in every way except concealability, so when concealability is no longer an issue, there is no reason not pack more heat to keep you warm in winter.

However, as with any change to your regular carry setup, it is essential to re-train yourself to acclimatize to the differences. Even small changes to your holster, gun’s grip size, gun’s weight, or any other differences can throw off your draw, which is largely based on muscle memory. Whenever you change your carry setup, be sure to do a little more draw practice than you ordinarily would.

Even if you don’t ever change guns or holsters and carry with the same setup year-round, you still need to put in extra draw practice in your cold weather clothing. You might be surprised how small differences can throw you off. For example, you may find that you have to be more aggressive in sweeping your cover garment when it is heavier, thicker, or longer. You don’t want to get tangled up when you’re trying to draw in self-defense.

It is also important to practice with all of your different winter outfits. During the hot weather, I only have two real variations in clothing. I’m either carrying under an untucked shirt, or I’m wearing a light blazer. The drawstroke is slightly different with each, but at least there are only two choices. In the winter, however (especially down here where the temperature can vary a lot), I could be using either just a shirt, a sweater, or a jacket as a cover garment. Beyond that, the coats and sweaters vary a lot more in their weight, bulk, and elasticity than my summer blazers. Some pull over. Some zip. Some may stretch when others may move.

I am always surprised at how difficult it can be to readjust to the winter wardrobe. It takes me a bit of practice each year to adjust to the difference in my draw. Most of my sweaters, for example, have a lot more stretch to them than a shirt does. I really have to pull a sweater much further up to adequately clear my gun for the draw. My first few attempts inevitably result in getting something tangled up or grabbing sweater with my draw hand instead of the gun because the sweater didn’t fully come over the grip. Again, you really need to make sure you work out these bugs so that this sort of thing doesn’t happen to you in a self-defense situation.

So, as you look forward to enjoying the coming cooler weather, don’t forget to put in the extra work on your draw. Whether or not you are changing guns, be sure to put in some good practice with all your typical winter outfits.