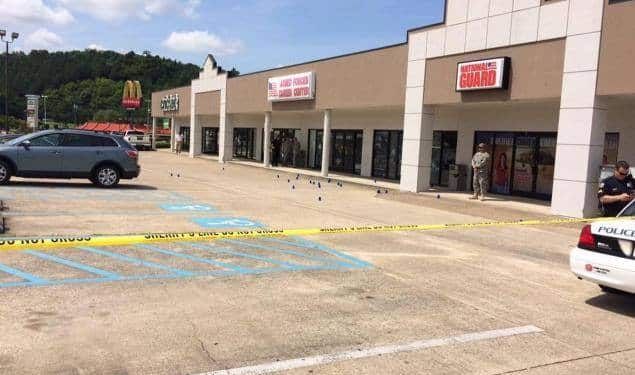 As news continues to pour in, we’re tracking a lone shooter that assaulted two separate military locations in Chattanooga on Thursday.  According to news sources at WRCB, the Lee Highway Armed Forces Career Center was hit at 10:45am and then a separate location at the Naval Reserve Center at 11:00am.

Military installations have been informed and are taking necessary precautions, according to Reuters.

WRCB is confirming that U.S. Attorney Bill Killian is classifying the shooting as an “act of domestic terrorism” and has pledged the full support of the Department of Homeland Security and the FBI.

According to Chattanooga Mayor Andy Berke, one officer was shot in the leg and was evacuated to the hospital for care.

What can be concluded at this point is that the shooter was able to approach both locations and open fire indiscriminately – targeting specifically military targets.  He made it to the second location before engaging police and eventually dying.

This shows a blatant and violent gaping hole in our security processes as a country.  We’re not used to these types of conflicts and our law enforcement cannot be depended upon to adequately respond to them.  When you have to mobilize multiple police units to respond to a single attacker, that let’s you know that attacker has some time before he deals with equally armed and capable officers.

If there was ever a reason to consider becoming a daily carrier – open or otherwise – this is certainly the time to do so.  Initial reports via CBS News – during the live broadcast – was that the name of the attacker was Muhammad Youssef Abdulazeez.  This was not mentioned often in relation to this shooting for obvious concerns about whether or not ISIL has made landfall in the US.

Not to burst anyone’s bubble but that’s a foregone conclusion.  ISIL has no intention of reducing its footprint to the bombed out remains of northern Iraq and war-torn Syria.  They will come here and fight just like they do elsewhere.  And unlike their predecessors, they’re smart.  They’re willing to lose their fighters in lost causes like Kobani – only to retake them again once the rubble has cleared.

This is a for real event.  And it needs to be treated with the caution it deserves.

Daily training and practice are paramount to the individual who hopes to be able to defend his life and the lives of his family and property.  It doesn’t have to be ISIL knocking on your doorstep to know that these are indeed violent times we live in.  Prepare yourself accordingly.

5 Things You Need To Know About CCW Across State Lines

How To Send Your Gun Through The Mail

How To Send Your Gun Through The Mail