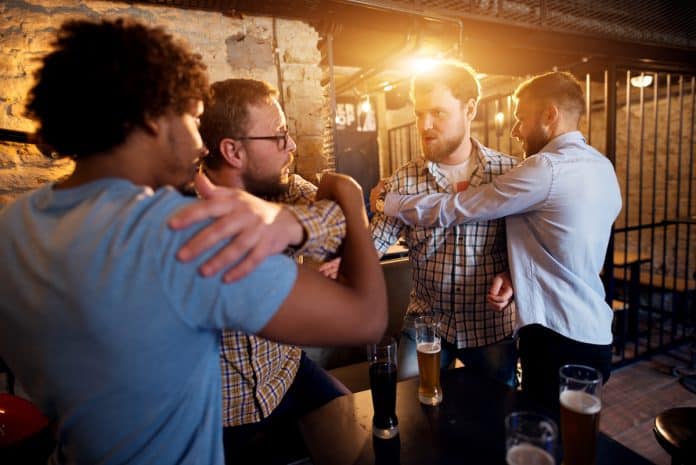 What do you stand to lose in a fight?

And the most expendable of all of these things is your pride. When you lose a fight that you started (or instigated) in front of other people, they’ll tend to view you differently from here on out. It can make people not trust you, see you as unpredictable, or even worry that you’re unstable and violent.

Now, what can you possibly stand to win in a fight?

That’s all you ever have to potentially win in a fight. That’s it. You can’t hope to retain your property or the respect of others or anything else you may view as valuable. The most you can expect to get out of a fight is simply your life and your well-being.

If your life and safety are not directly threatened, you don’t need to be in a fight. Proving a point or “standing up for something you believe in” are all stupid reasons to get into a fight.

A lover lost? A friend turned bad? None of these things improve in the least with the addition of violence. Even if you “win,” you still lose. And as an adult living in a civilized society, the consequences for “winning” or losing are pretty much the same. Bruises, cuts, potentially broken bones, and the likelihood that when the police arrive, they’re not going to recognize your “standing up for something you believe in.” That’s just a fact of life.

Why do we keep dwelling on “standing up for something you believe in”? Because it’s a typical idiot response when someone says he’s going to get into a fight he doesn’t need to be in. It’s undirected energy, and motivation turned to its most vile element.

Self-defense happens when you have no choice. When you see someone you love being attacked or you, yourself, are being attacked, options for a retreat are delayed until the immediate threat is handled.

Handling your stuff is how you get people to respect you. Getting into fights you don’t need to be in is a fast way for people to view you in a negative light.

Handle Your Stuff – Stop Thinking With Your Fists

What other weapons exist other than your use of force? Let’s discuss:

Here are three weapons that every major general has had to leverage to win a fight. The war for ideas involves dismantling your opponent with your mind before the first blow is ever struck. If you can weaken your opponent, wear down his network of support and defenses, and draw him out at his most vulnerable, you will never need to even throw a punch – he’ll do all the self-destructive work on his own.

Monetary instruments are another great invention used predominantly for subjugating others. Being more successful, having more financial ability to move at will are all means you can use to better yourself and distance yourself from your opponent. If you’re getting bullied or harassed, grow up to own that dude’s company. Develop a plan to get yourself out of his sphere of influence and use that unmitigated frustration for your own betterment.

And lastly, legalistic force. Do you know who’s tougher than the dude trying to beat you up? The cops. If you throw a punch, even if you win, you still lose. However, if he throws a punch, what’s his can now be yours.

The pain of a hard punch to the face is minimal in comparison to driving around the dude’s Mustang afterward. That’s what’s called using legalistic force.

Now, you may have noticed. We’re not focusing on life-or-death scenarios. Why? Because in those scenarios where your life is threatened, you must fight. And you must win. When either of those two factors are involved, fight dirty, fight to win, and show no mercy until your attacker is neutralized.

Everything else can be handled with a bit of finesse and some planning.

This article really helped me out, thanks. When you walk away from a fight your ego can start harassing you. Saying things like, “You’re a coward!” It can become a burden on your conscience. I needed this paradigm shift to shut up my ego.