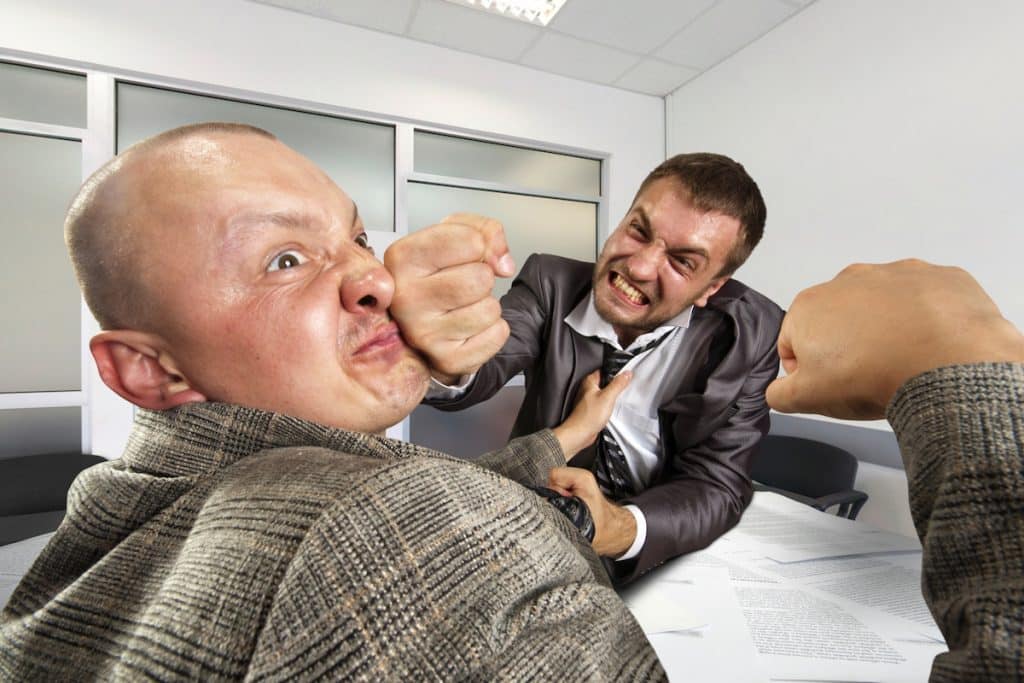 Not just concealed carriers and gun owners but generally everyone will be confronted with a situation which could quickly elevate to violence. For responsible adults with obligations such as children, a home, and a reliable job, it’s not as easy to rationalize fighting someone when escape is an option.

It’s not a tough question, but it’s one I’m sure plenty of concealed carriers have had to ask themselves. It only gets more complicated — not less — when you have a gun strapped to your waist. It doesn’t take much for that gun to become dislodged or even accessible by your opponent. By that time, it’s too late.

Furthermore, if and when police arrive, they’re sure to be a lot more aggressively apprehensive about you and your opponent if they know or suspect one or both of you are armed.

A situation like this came up once for a close friend of mine. I’ll call him Nathan. Nathan is a firefighter in a local city in New Hampshire. His wife and his kid escaped a previously extremely abusive relationship, and the baby’s father still liked to show up to hockey practice on the West Side Arena to make a big deal. He would just show up, act menacing, stomp around, and stare.

Nathan recalled one time when he walked up to him, ostensibly to have a “civil conversation” and baby daddy inserted a casual, “how do you like those stretch marks I put on your woman?”

Now, some things in this world will raise the blood pressure of just about any red-blooded male. As only a guy listening to the story, I had to struggle to maintain my composure.

However, Nathan is a concealed carrier. He has a steady job where he can’t afford to have an assault charge under him. Nathan has a wife and a kid who depend upon him for his income. He has a home that he’d likely have to forfeit to pay for the costly legal fees associated with going to court. And last, but certainly not least, he always carries a gun on him.

The father, on the other hand, is a lanky, unemployed, balding 6’5″ dude with mental issues. Sadly, I remember seeing him at a barbecue a few months back. He stands to lose precisely nothing running his mouth and acting like a sketchy loon.

Nathan has everything to lose.

Nathan told me over a few beers in his garage that he wished with all his might he could have knocked the teeth out of that guy. Instead, he just stood his ground and brushed off the comment. He had to be the bigger man. More importantly, when his wife and her kid finished hockey practice, he had to get them out of there.

I don’t envy his situation, but I thought it was a great illustrative example of why a concealed carrier – specifically – has just a bit more to lose in an escalating situation than an unarmed person. Not saying the threat of violence is any less or the legal ramifications any less painful, but there is an added element: access to a firearm.

While Nathan, in this situation, had no duty to back down or walk away, he definitely couldn’t initiate violence despite, what I would call, clear provocation. This is something every concealed carrier should be mindful of when interacting with people who initiate provocation. The first action is costly.

Anyone having concealed carry permit is considered to be an adult, getting into a fight while carrying as opposed to walking away is just plain stupid. Remember the reason you
carry is to protect your life or the life of someone you are responsible for from death or grave injury. If you do anything to escalate the fight to a point where drawing or firing your weapon occurs you will often lose the legal self-defense option. Be smart, just walk away.

Or you can attempt to deescalate the situation by pulling out your CCW Badge and claiming to be a sheepdog.

Try carrying a $5.00 bill weighted with a match book. Toss it to the front and invite the other person to have a drink on you. I’m sure that $5.00 bucks is a lot less to spend then the costs of a court appearance no matter how far into the “right” you are.

and when someone comes up on your own property threatening you? Where do you walk away to then?

You have to decide, if walking away is possible do it! Going macho with a loaded firearm is expensive in terms of life, emotion and economics.

I don’t think you have any duty to retreat on your own property. The other person is the violator. If they go to a weapon as well, that is go time if you ask me. Bare fists are not.

Here in CT, if you’re carrying and get in a fight, even if the gun is never drawn, it’s assault with a deadly weapon. Ridiculous.

I think my wife’s stretch marks, put there by her first husband, are part of what makes her beautiful. I would have told him so, and thanked him. I would also thank him for being such an a-hole that I now had a woman who makes my life complete and full of love, and a kid I’m proud of, who calls me “Dad.”

When dealing with assholes and irrationals it is best to say nothing and walk/run away. There is nothing to gain by saying anything and staying in the situation will just make it worse. You always win all the fights you are not in.

Maybe Sheila Jackson Lee’s congressional staff should take your advice and quit their jobs en mass. Oh wait, this has actually happened before because she has the highest staff turnover of any U.S. Representative.

I practice this when talking to Democrats.

The above mentioned Democrat had a habit of referring to a man on her staff as “You Stupid Mother F—er”. This was not isolated to a single incident, that’s what she called the guy on a daily basis.

Yes. I’ve been a very good boy. Actually, having my CCW has taught me to avoid confrontation as best I can, even if it means walking away and suffering the verbal spears and jabs. I look at it as though I did them a favor. They were lucky they used their mouth and not physical violence, or things may not have turned out so well for them. I’ve learned words are just that…words, sounds, nothing important. I’m the bigger man because instead of beating them into the ground like a flesh piton (or pistol whipping them), I separated myself from the situation. My friends and people who know me warned them afterward just how close to immortality they came, and I don’t need a gun for that.

Yep. Had some punk get into my face eyeball to eyeball. Then stepped back, took off his shirt, and punched me in the jaw. I saw no knife so I just folded my arms and took the hit. Fat lip for me, and jail time for him with a nice restraining order to boot. I was strapped the whole time.

Wow, I dont know if I could have done that, what if he had knocked you unconscious? what was his mind set, could he have gone to your home? thank goodness you can take a punch.. that guy owes you his life

My daughter was being bullied by his girlfriends son, and I was watching the kid and keeping him away from my daughter. This lightweight tried to tell me that I couldn’t do that and when I said “Oh yes I can” he decided to get in my face.

I applaud him, as a ccw holder in the state of CA, I have gone out of my way to avoid a confrontation, the reasons are obvious especially when it come s to where I live… getting my ccw 6 years ago it really opens ones eye’s to situational awareness,avoidance etc. As my wife and daughters roll there eye’s, “better to have and not need,than to need and not have.”
Thank you for your site, I’m hoping that national reciprocity will actually go through as we’re slated to go to Georgia in Sept to see a Bulldogs game, they do not recognize CA CCW ( I don’t blame them)