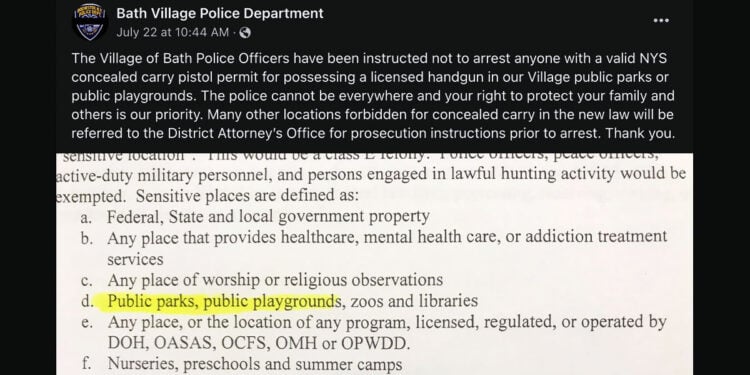 The Village of Bath Police Department posted a statement on their Facebook page stating they will not be following part of New York’s newly signed  Concealed Carry Improvement Act that goes into effect Sept. 1, 2022, specifically regarding public parks and playgrounds.

“The Village of Bath Police Officers have been instructed not to arrest anyone with a valid NYS concealed carry pistol permit for possessing a licensed handgun in our Village public parks or public playgrounds. The police cannot be everywhere, and your right to protect your family and others is our priority. Many other locations forbidden for concealed carry in the new law will be referred to the District Attorney’s Office for prosecution instructions prior to arrest. Thank you.”

Good for them for stating a stance against these restrictions that will only affect law-abiding gun owners. I highly doubt criminals will look at this new law and tell themselves, “Well, guess I won’t carry a gun in ‘insert-sensitive-area here.’ This law only makes it so that law-abiding gun owners cannot defend themselves against criminals planning to break the law.