My wife and I live in New Orleans and recently decided to head down to the French Quarter to have lunch and check out some of the local shops. Due to the amount of crime, we generally steer away from the French Quarter except on special occasions, this one being our 5 year anniversary. As usual, I carried my concealed firearm with me. We both thought checking out the Katrina Museum would be interested so we headed that way.

Once we got there we saw a “No Firearms Allowed” sign. Being that these signs DO have the force of law in Louisiana, we decided to skip the museum and head straight to lunch. Like most of us, I just don’t understand how this “protects” anyone. Once I got home I decided to send them a message on Facebook: 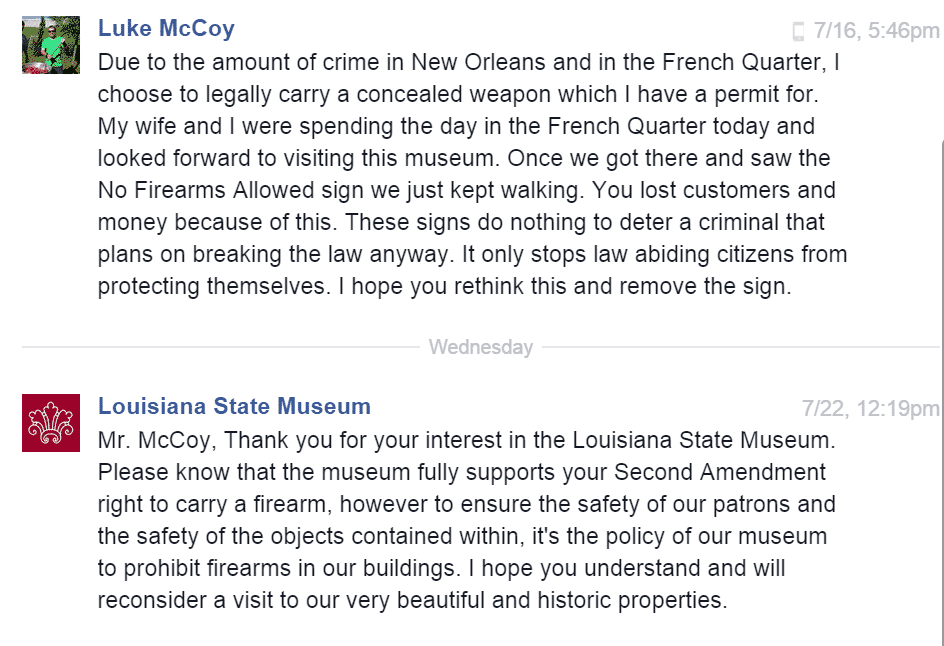 How can they claim to fully support my Second Amendment right yet ban firearms from the museum? How does this “ensure the safety of their patrons?”

Last night a shooter opened fire in a theater in Lafayette, LA which was also a “Gun Free Zone.” He obviously ignored the signs and their “code of conduct.” All these do is prevent citizens that obey laws from protecting themselves. I sent them another message this morning asking how exactly does banning firearms “ensure the safety of their patrons” when these shootings keep happening in Gun Free Zones. I have yet to hear back from them.

While many of us do not agree with Gun Free Zones, we do need to be aware of the laws surrounding them.

Once you get a concealed carry permit, you’d think that the world would be your veritable oyster.  Unlike a lot of states which strictly prohibit the open carrying of firearms, concealed carriers are a lot less noticeable and are, in some cases, allowed to go places where an open carrier cannot.

And then there are “gun free zones”.  And we’re going to break down what constitutes a “gun free zone”, how it’s regulated, and why you need to be cognizant of them.

The federal government, at different times, has passed and signed into law different pieces of legislation which strictly prohibit civilians carrying firearms.  Many of them were advertised as “common sense” legislation designed to protect vulnerable areas from a criminal or a deranged gunman — however they have yet to really restrict that in practice.

Violating a federal “gun free zone” law carries with it a hefty penalty and federal charges.  That means federal prosecution and federal prison if convicted.  So the full weight of the law can and will apply to those who fail to acknowledge it.

One such example is the Gun Free School Zones Act of 1990.  This act was signed into law by George H.W. Bush back in 1990.  It’s been challenged many, many times since it’s become law but overall, it holds that a person cannot knowingly carry a loaded firearm onto school grounds unless they meet a very select criteria.

States do have the ability to make additional provisions.  Some examples of those provisions include (but are not limited to):

Government facilities owned and operated by the federal government – such as court houses, post offices, correctional facilities, and even Veteran Affairs buildings – are all designated “gun free”.  This means you must have specific authorization by the federal government to carry a firearm on federal property.  Notable exceptions exist for law enforcement responding to an emergency, contract security, and duly authorized members of military or federal law enforcement.

Here’s a few places that are federally protected “gun free” zones that you may not have realized:

Most States Acknowledge Private Property Owners Right To “Opt Out”

Many states have provisions within their laws to allow private property owners to designate their property as “gun free”.  This means that unless you have prior permission from the owner of that property, you can be asked to leave if it is discovered you have a firearm on your person.  Not all states acknowledge this and most require that clear signage be placed informing visitors of that “gun free” designation.  Texas, for instance, has extremely strict requirements for a property owner to designate an area as “gun free” for both concealed and open carriers.

In addition to each state having its own restrictions and prohibitions on where and when a concealed carrier may take his pistol, there can also be county and municipal ordinances as well.

In general, it’s a good idea to pay attention to signs when you’re entering a business or another person’s property.  Every place that is a “gun free zone” has to post that information in a clear, concise manner and in a conspicuous place but ultimately it will be your responsibility to determine this information.  Ignorance of the law is not an excuse that often holds up in court.

If you ever doubt the validity of a place’s “gun free zone” designation, check the sign to see if it has an ordinance or law citation attached to it.  If it doesn’t, err on the side of caution until you can confirm or deny the enforcement of such a law.

Here is just a sample of some of the “Gun Free Zone” related messages we found on Twitter today.

Surprise! There’s Been Another Mass Shooting In A Gun-Free Zone http://t.co/IRsdeJmjSA

There's no safer place in the world than a #GunFreeZone. You don't have to worry about anybody shooting back. http://t.co/ycpkYIcxm5

Can You Do This Rifle Drill?

What Do Different Types Of Ammo Do?

What Do Different Types Of Ammo Do?