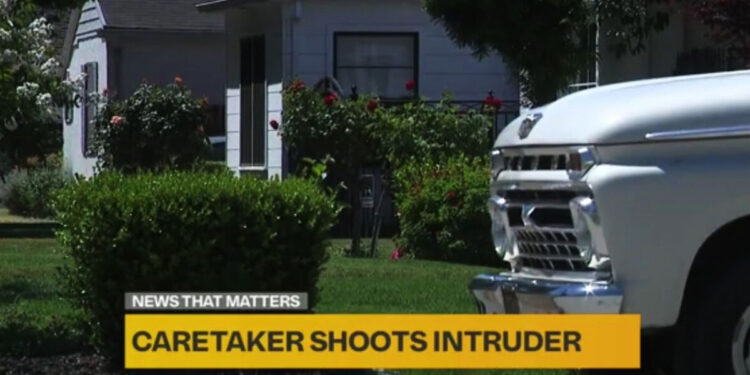 STOCKTON, CALIFORNIA – A man was fatally shot after trespassing on a homeowner’s land and threatening the caretaker who confronted him. Officers got a call around 6:30 Saturday evening from the 43-year-old caretaker, who reported the incident that occurred in the 3200 block of Allston Way. Upon their arrival, police located a 38-year-old man suffering from a gunshot wound. He was transported to a hospital where he later succumbed to his injuries. Authorities believe that he was a transient person.

Based on evidence and statements, police investigators believe that the 43-year-old man was in fear for his life and acted in self-defense. A statement from the San Joaquin County District Attorney’s Office said the shooting “appears to be justified, at this time,” according to the police department.

The homeowner, 93-year-old retiree Dr. Robert Browne, told local media that the man is more like a friend than a caretaker and that he has assisted him with tasks around his home for many years.

“He noticed somebody out in my backyard, so, he jumped up and went out and confronted the individual, who was apparently bringing in a lot of food and equipment and stuff in the back yard, and he confronted him, and the guy pulled a weapon out, and so my caretaker did likewise.”

The doctor was extremely grateful for the quick and decisive actions of his friend, saying, “As far as I know, he saved both of our lives, because the individual was armed. It was quite frightening.”

This wasn’t the first time that the doctor has experienced issues caused by transients, who he says frequent a park across the street. It was, however, the most serious incident according to Browne, who said, “I’ve had a couple break-ins since I’ve lived here but nothing to that extent.”

Neighbors were supportive of the man’s actions, with one saying, “I think he has every right to protect himself and whoever he’s taking care of. That doesn’t bother me at all that he stepped in there.”

It doesn’t appear that either man at the home was familiar with the male trespasser, and police are continuing their investigation.

By Edgar Lee via Concealed Nation and republished with permission.