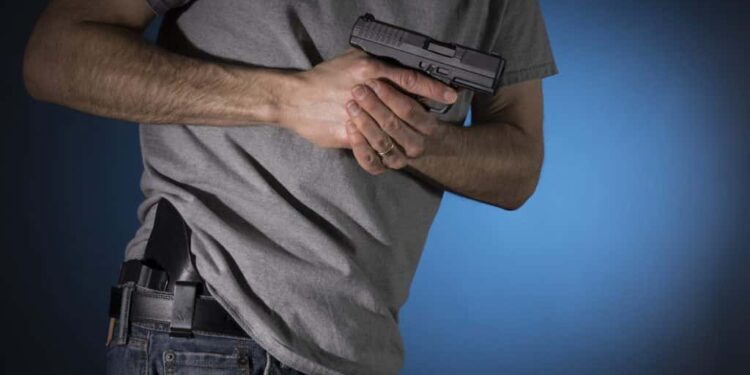 Most people that carry a gun regularly develop a favored carry mode. Carry mode refers to the position on the body and the general manner in which you carry a handgun. For example, Inside-the-waistband (IWB) carry typically refers to carrying a gun on the strong side hip in an inside-the-pants holster. Appendix-inside-the-waistband (AIWB) refers to carrying the gun in the appendix position, also in an inside-the-pants holster. There are a variety of other carry modes as well, such as pocket carry, ankle carry, cross-draw carry, etc.

All carry modes have certain advantages as well as certain limitations. Those that prefer any given carry mode typically find that the benefits they offer outweigh the negatives for their situation. Here I do not wish to debate the merits of one mode vs. another, but instead, I want to impress upon the concealed carrier the importance of carry mode consistency.

Since each mode offers certain advantages or works particularly well in certain forms of dress, it can be tempting to switch up our carry mode, but there is an intrinsic down-side to doing so. Even for those who do a significant amount of training drawing their weapon from concealment, it is quite hard for the human being to become highly proficient with more than one carry mode. In a time of crises, such as reacting to a violent attack, you will default to your training, and you will default to doing what you are most familiar with including drawing your gun.

Under Stress, You Will Default to Your Training

If you have drawn a gun from your strong-side hip thousands of times but happen to be wearing your gun on your ankle one fateful day, a location that you rarely carry or train from, what do you suppose you will do by instinct when reacting to a threatening situation? You will reach for the gun where it most commonly is. In a reactive situation, such a delay can be dire.

For those that claim to have no problem going from one carry mode to another, it may simply be that you have not trained to proficiency with any carry mode and therefore you can’t perceive the difference. It is similar to the folks who insist that they have no problem going from one gun to another and rotate between five different handguns with different manual of arms just based on mood. A performance difference is not apparent when all you do is casually draw the gun and shoot at paper with no time constraints. If you draw the gun under life-threatening stress, the wheels can fall off and familiarity is crucial.

Even in competition, I see participants at matches miss safeties or accidentally dump magazines because they are using a gun that they have never used under any stress before. The same principle applies to carry modes. In a panic, you will reach for the location on your body that you have trained the most from. This reason is why it is dangerous to switch up carry modes, and you should avoid it unless necessary.

We Sometimes Can’t Use the Same Concealed Carry Mode

The inevitable problem that creeps in for many of us is that our preferred carry mode may not work for us all of the time. While we would perhaps love to carry a full-size pistol in an easy-to-access holster the constraints of our lifestyle, profession or environment may restrict us from being about to do this. Therefore, as concealed carriers, we may have no choice but to embrace multiple guns, and indeed numerous carry modes, so that we can remain armed more of the time rather than less. However, some strategies can minimize the downsides.

Minimize the Downsides of Switching Your Carry Mode

First of all, you may find that using a smaller gun than your typical carry piece that you favor will allow you to stay with the same carry mode yet be more concealed. I am adamant in my belief that carry mode consistency is imperative so I will go as far as to say that a smaller gun in your usual carry mode is better than a more capable handgun in an unfamiliar location. The reality is that most people in public are oblivious to the tell-tale signs of a concealed handgun. But if in certain environments or around particular company that you can’t risk printing a small gun may facilitate absolute discretion even if worn in your usual carry location.

If we come to an inevitable need to utilize a different carry mode to accommodate concealment on certain occasions, then we have to do so. Obviously, it is better to be armed than not. Here, though, my suggestion is to try and limit yourself to only one additional location so that you can work to build at least some familiarity with it. A good example would be to select a body location of deep concealment that perhaps you could make versatile for an alternate means. If you carry a backup gun, at least on occasion, I would suggest making that carry mode your deep concealment option. Perhaps you ankle-carry a backup gun. Well, if ankle carry works for your deep concealment needs then you are not transitioning to an entirely unfamiliar carry mode.

You Must Practice Both Carry Modes

The obvious rub is that a second carry mode requires significant practice and you must spend time training to deploy your gun from the different body location. I find that a secondary mode, obviously, never becomes as ingrained as the primary, so we need to simply make the best of it if we must embrace an alternate carry mode.

In closing, give some thought to maintaining as much consistency as possible and avoid using alternative carry modes entirely if you can. If you must use an alternate carry mode then invest in the necessary training time to ensure you can deploy your handgun quickly under stress.

Spouse Worries About Appendix Carry With Round In The Chamber

Spouse Worries About Appendix Carry With Round In The Chamber