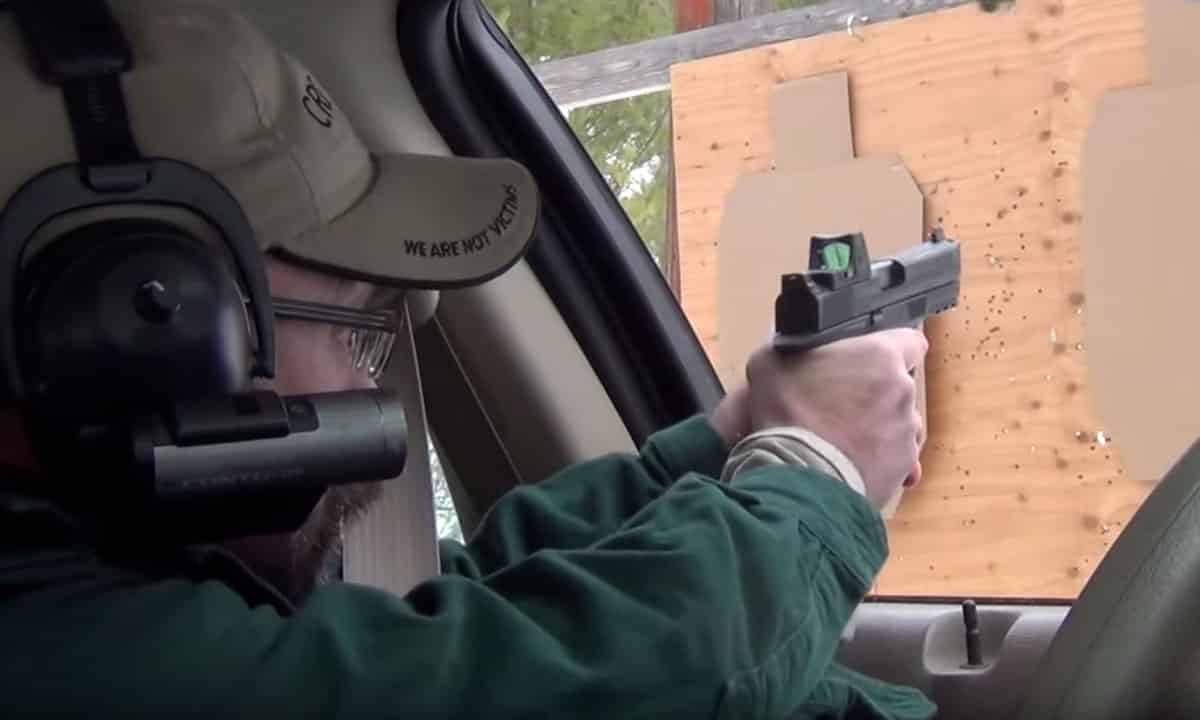 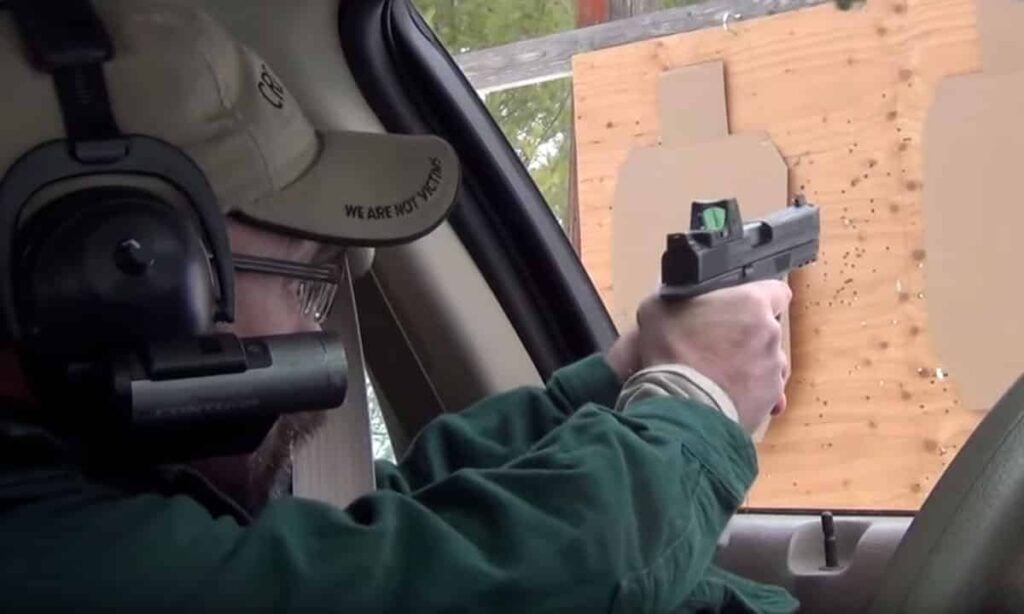 One of the biggest mistakes that I see in most CCW training is the assumption that it will happen in either open space, either interior or exterior. We train to fight in our living rooms, the parking lot of our offices, and similar spaces. We assume that—cover/concealment aside—we’ll have open line of both incoming and outgoing fire. And finally, for safety reasons, we train wearing eye and ear protection.  In reality, self-defense CCW shootings will happen in the time and place of the bad guy’s choosing, and the way we train may not reflect those conditions.

A great many self-defense shootings involve a vehicle. Maybe you’re in one, maybe you’re ambushed by one, but those rolling boxes of glass and steel often come into play. For purposes of this discussion, we’ll assume for the most part that you’re the one in the car.  As it turns out, that assumption changes everything about how CCW shootings happen.

The first and most obvious issue is the draw and presentation of the weapon. Bluntly, most CCW holsters are going to be tricky to draw from if you’re seated and seat-belted in a car seat. To solve this problem, you may:

I do not recommend that last approach.

The first option—practice with your current rig—is likely going to be the most popular, and that’s not a bad thing.  These are skills you’ll need anyway: drawing and presenting from a shooting position, weapons presentation and retention with a confined space, and extricating yourself quickly from a self-defense shooting.

There are four basic angles you’ll be shooting from

Each will have it’s own considerations, but in all of them you may find yourself shooting from a less than ideal position: close weapons retention index shooting on your side of the car, one arm outstretched for the opposite side. These are different than the sights-oriented Weaver-style stances most of us train on, so get in your vehicle and practice, practice, practice for that contingency.

Protip: practice in a garage or other out-of-sight location. If your neighbors see you waving a gun around in your car you may spend a long day talking to law enforcement.

There’s another important thing to consider: most of the time the windows are up in the car—the windshield certainly is. If you draw and engage a threat from within a vehicle, you may be shooting through glass. Automotive glass is tough, tough stuff, and as our friends at The Box O’ Truth have shown, it has a significant effect on the ballistics of a shot. The Box O’ Truth concludes, and I agree: “A car is a much better weapon than a handgun” and using it to flee the scene is likely your best option—if it is an option.

However, if you must shoot from within the vehicle, you’ll also be contending with the unbelievably loud noise of a gunshot in a very small space—you’re likely to damage your hearing, or even stun yourself if you’re not prepared. While car glass doesn’t break into dangerously sharp shards, it does kick up a fair amount of dust when broke, so you’ll probably have irritated or temporarily impaired eyes. All of this will affect your performance during and after the event, so bear that in mind.

There’s a lot more to talk about, including the legal implications of a vehicle-involved shooting. I hope the information here was helpful to you, and if you’ve trained or taught shooting from a vehicle I encourage you to share your knowledge in the comments section. I’m sure many of us could benefit from your experience.

Here’s another one: Inside the car. Being in the drivers seat, shooting to left at close range would be easier in some ways using the left hand. That may not work for everyone, depending on their abilities. The right hand British cars are probably better for righties.

Jim, as a right handed shooter I have to disagree. In order to shoot to the left side of the vehicle using your left hand from the drivers side you would almost certainly have to stick your hand out of the window. Shooting across your body from your right hand is much easier, and much harder for the potential threat to get to your gun. The driver side door would be a huge obstacle for a left handed shooter.

I would find shooting to the left annoying in the driver’s seat from a muzzle blast perspective. It’s closer to the face, eyes and ears.

I would find it annoying as well, but nowhere near as annoying as getting shot or stabbed. The bad guys are usually not going to make my comfort level one of their priorities when setting up their attack.

Can’t stab through glass and the car itself is a pretty good weapon and method of escape.

British cars always make traffic stops interesting because the cop pulling you over has probably never pulled over someone in one.

you must have your own range, most places won’t let you draw from standard holster

Yeah, it would be cool if I could drive my car on the range to practice this. Where I grew up, there was a range where the owner would let you shoot anything for a fee. Appliances, cars, mannequins… Crazy place. I haven’t seen that since.

Considering that I started with my web based business, I get paid $25 just about every single fifteen min. It appears to be crazy but the truth is you won’t forgive your-self if you don’t glance through it. Learn more about it here>> DISQUS.COM/by/adriennevarney/

At my range, we line spammers up and have a go at them. Great fun!

I once made a life sized version of the yellow AOL guy so I could shoot it at the range. The only problem I had was that everyone else wanted to shoot at it as well.

Growing up we had a similar place, I travel for work and you don’t find many places without a ton of restrictions, I avoid them when I can

I’ve earned $84 ,000 until now this year working online but I am a full time university student . I’m implementing an online business opportunity I found out about and even I’ve made such decent money . It is actually seriously user friendly not to mention I am just so thankful that I found out about it . The possibility with this is endless . Here’s what exactly I do>>>
FACEBOOK.COM/Workt-at-home-jobs-US-UK-Canada-Australia-New-Zealand-623131401167324/app/190322544333196/

Vehicle tactics and practice aside, I’ve noticed this. The indoor ranges I’ve been to all have prominent signs saying they don’t want you to practice self defense. They only exist as a backstop for bullets.

I’m right handed. I carry my pistol on my left hip, backwards, and I crossdraw. Doesn’t get in the way when driving and it’s always ready to go.

I’ve generated $84 ,000 already this season working on the internet and consequently I am only a full time student . I’m taking advantage of a web based business money making opportunity I discovered and after that I’ve earned such type of good money . It is actually extremely convenient to use and also I’m just too satisfied that I found out about that . The potential using this is never ending . Here’s exactly what I do>>>
SECURE52.COM

I’ve generated $84 ,000 so far soon working via internet moreover I am a full time college student . I’m taking advantage of a home based business opportunity I heard about and consequently I’ve generated such type of good money . It is seriously simple to use and I’m just too delightful that I found out regarding it . The capability using this is end-less . Here’s everything I do>>>
SECURE47.WEEBLY.COM

I’ve made $84 ,000 so far this year working on-line moreover I am a full time university student . I’m utilizing a home business opportunity I heard about and consequently I’ve generated such great money . It is really convenient to use so I’m just very very happy that I found out regarding it . The potential with this is limitless . Here’s exactly what I do>>> SECURE75.WEEBLY.COM

I’ve earned $84 ,000 to date this holiday season working on the internet however I am a full time student . I’m utilizing a web business marketing opportunity I heard about and I’ve earned this kind of decent money . It is actually really so easy to use and also I’m just too satisfied that I discovered out about that . The possibility using this is limitless . Here’s exactly what I do>>> SECURE53.WEEBLY.COM

I’ve generated $84 ,000 already this season working via internet moreover I am a full time student . I’m by making use of a home business money making opportunity I found out about and in addition I’ve made this kind of decent money . It is actually really simple to use not to mention I’m just too satisfied that I found out about that . The possibility within this is limitless . Here’s what I do>>> SECURE77.WEEBLY.COM

I’ve generated $84 ,000 to this point soon working online while I’m a full time university student . I’m utilizing a business online opportunity I heard of and also I’ve generated such great money . It’s extremely user friendly and I am just very glad that I found out regarding it . The capability using this is never-ending . Here’s what I do, please have a look at my account for site name >>>

I’ve made $84 ,000 till now this holiday season working online while I’m a full time student . I’m taking advantage of a home based business project I read about and after that I’ve generated such good money . It’s undoubtedly simple to use not to mention I’m just very glad that I found out about that . The potential with this is long-term . Here’s what exactly I do>>> FL-Y.COM/3kz7

Read through following report to learn how an individual mother was able to generate $89,844/year in her extra time on her laptop computer without selling anything>>> FL-Y.COM/3m1b

I profited 104 thousand dollars previous year by doing an online job at my house and I manage to accomplish that by work­ing in my own time f­­o­­r 3 or sometimes more hrs every day. I’m using work model I was introduced by this company i found online and I am amazed that I was able to earn such great money. It’s so newbie friendly a­­n­­d I am just so thankful that i found it. Here is what i do… TIMELY84.COM