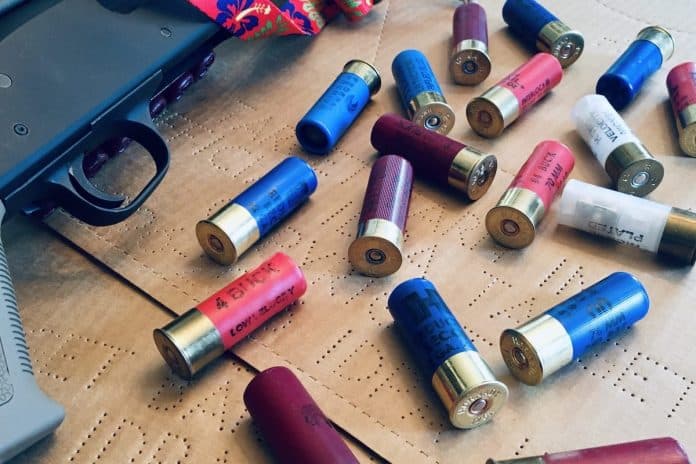 Birdshot is for Birds

The argument for birdshot is that the smaller size shot is less likely to over-penetrate or go through walls. But if it hits the bad guy at close range, it is basically like a column of lead and will penetrate the body deep enough to do what we need it to do. Well, those two ideas don’t exactly ride on the same set of tracks. At extremely close ranges, like 5-10 feet, birdshot might be effective (and that is a pretty big “might”). Outside of those ranges, it is not likely to guarantee the results that we need if it has come to shooting. That is a very short envelope, and quite honestly my crystal ball doesn’t work well enough to know if that is actually good enough. Someone else’s might work better.

I understand the concern of over-penetration, but we have to come to terms with the fact that any viable self-defense load that can reliably cause incapacitation will probably also go through a few walls. How do we minimize the risk of penetration through walls? We don’t miss our intended target. The human body is incredibly resilient, and even if a projectile makes it all the way through the body, it is likely to have expended so much energy in the process that the downrange risk is minimal. Just don’t miss. Definitely easier said than done, but it is on us to be that good and make it happen.

Less-Lethal is a No-No

Concerning the use of less-lethal projectiles, or loading a shotgun so the first couple rounds are birdshot or some other shotshell likely to be less effective. If we are pointing a firearm at someone and pressing the trigger because we have no other alternative to protect human life, we need something in the gun that is the most likely to give us the needed result. There is no time for anything else, otherwise, why are we pressing the trigger? That should end that argument (but probably not).

What We are Left With

That pretty much leaves us with some type of buckshot or grandpa’s tighty-whities. I won’t argue the effectiveness of grandpa’s favorite underwear, because it would probably work just fine. Let’s just skip to buckshot. Assuming that the FBI has it right in requiring 12” of penetration on calibrated ballistics gel, that pushes our buckshot options up in size. The traditional answer for buckshot has been to use 00 buckshot for self-defense. I am inclined to agree with this recommendation. Not because of the size of the shot so much, but because of the available patterning capabilities from some 00 buck loads and our need to not miss. Not even a little bit. That technology just doesn’t exist in other shot sizes or doesn’t work quite as well.

Other than 00 buckshot, #4 buckshot is also commonly recommended for the home defense mission. The logic being the smaller shot size minimizes the supposed over-penetration risk while still being an effective load. Like .380 though, #4 buckshot is kind of the bottom floor. The load options for #4 buck are also a bit limited and do not have the same technology applied that stretch the capability of the 00 buck loads. If you run with a 20 gauge though, #4 buck might be the best you can do.

By the numbers, the ideal buckshot load is said to be #1 buckshot. It has the greatest potential for tissue damage and is of large enough size to have sufficient penetration. The proverbial sweet spot. Like its smaller sibling #4 buckshot though, it too has not benefited from the technology applied to 00 buck loads. There was for a time a #1 buckshot load from Federal that used their amazing Flite Control wad design, but it was discontinued to iron out some bugs. If it ever returns to the market, it will probably be a contender, but that is a pretty big if.

I know what you are thinking though. Buckshot will penetrate too much. Especially 00 buckshot. That is what we hear all the time. It will sail right through people. Instead of reading what I have to say about it, I will point you to someone else. Check out this article from Greg Ellifritz at Active Response Training. He spells it out in a way that I cannot for this article.

So, we have ruled out birdshot, ruled out less lethal or other gimmick loads, and considered our options with buckshot. Which buckshot load we choose, well it depends. It depends on what you need your shotgun to do, and how it shoots the different loads. Shotguns are kind of like fingerprints, each one will shoot loads a little differently than the next. The important part is to figure out what you need in terms of likely engagement distance, pick a load, and then pattern that load at that distance. Once you get to about an 8” pattern, that is in my opinion (which is worth what you are paying for it) about the maximum useful range of that buckshot load. Much further and it will become too difficult to keep the entirety of the pattern on a target. Remember, we aren’t allowed to miss, so keep that in mind.

…Peter Chapstick (African professional hunter hunting real dangerous game like wounded leopards) had a concept for shotgun reloaders.- a mixture of buckshot and smaller shot filling voids. The idea was to pack as much shot lead into a cartridge as possible…

Most people in the United States live in apartments. Most of those apartments longest length are just about 10 yards and most of the distances of their beds to their bedroom doors are 2-3 yards. At distances at those yards, birdshot isn’t something to sneeze at. We have to remember that any gun barrel pointed at you is dangerous. I think many experienced people forgot that.

Only about a quarter of Americans live in apartments, but I get your point of view. I would also agree, any firearm, regardless of what it is loaded with is dangerous.

It is my preference to use decent patterning buckshot to maintain pellet accountability, and to give myself the best odds of success. Success being defined as a stopping whatever I am trying to stop as quickly as possible. I think a good buckshot load gives the best odds. I understand a fair number people probably disagree with me though.