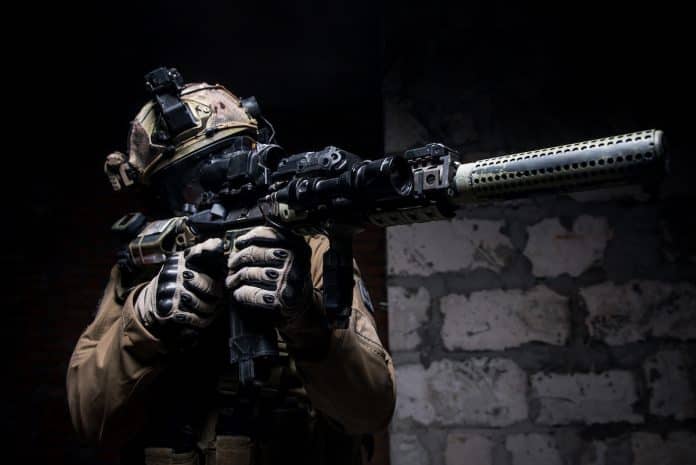 Last Sunday night around 9:30 PM, our three-year-old son was asleep, and my wife and I were on the couch watching a movie, The Infiltrator. My phone rings and I see that it is a neighbor calling. We are friends with him and his wife, but he rarely calls me so I said to my wife, “Why would he be calling me this late?”

The next thing he said was, “Get your gun and get over here!”

My first reaction was to get up, holster my Glock 19 that was sitting on the shelf next to our couch and make sure our front and back doors were locked. As I did that, I told him to take a breath and tell me what was going on.

He said that his neighbor’s boyfriend was breaking into her house (both of which I have never met). They had heard a loud noise, and the woman’s thirteen-year-old daughter had climbed out of her bedroom window and fled to their home. And then he asked me again to come over with a gun.

So I ran to my bedroom, grabbed my AR-15 from the gun safe, threw on my tactical vest and ran out the front door…

Okay, that didn’t happen. I actually didn’t even think twice about what I said next. I asked if he had called the police and if his doors were locked. He said yes to both, so I told him to stay put, wait for the police and that I wouldn’t be running down there guns blazing.

As I started writing this article after the incident, it reminded me of a good video on the same subject I had just watched a few days ago by Warrior Poet Society:

Next, I sent a message to a good friend that is with the local sheriff’s office. I asked if he was working and told him a neighbor had called the police about a break-in. He said he already heard the call and that units were en route. I relayed this to my neighbor and again told him to stay put.

From there I went to a bathroom that has a window that allowed me to see both houses. They are six houses down but the street curves around so I can see the front of both houses. I kept an eye out looking for any movement to be able to let my friend know if I saw the boyfriend going toward his home, which I didn’t.

As soon as the police got there, which I would say was in about five minutes from when my friend called me, I let him know that the police had arrived. And that pretty much wraps up the incident from my end. The police were on the scene — time to get back to my movie.

After talking with my neighbor the next day, the situation ended with the police making the boyfriend leave in an Uber. The girlfriend showed up a few minutes later, got her daughter and went home. The police said they know this couple well and have dealt with them before.

First off, as I mentioned before, as gun owners and concealed carriers, we have to decide who we are willing to protect. In this situation, I didn’t know the neighbor whose boyfriend was breaking into the house. My friend that called me had already called the police and was “secure” in his home. And without knowing exactly what was going on, I wasn’t about to leave my own house with my wife and three-year-old. Those two are my top priority.

I also assume that the police most likely had no description of the boyfriend. This all happened when my friend was asleep, and the daughter jumped out of her window when she heard the noise, so neither of them saw the boyfriend and wouldn’t have been able to give the police a description. If I had been the one walking over there when the police showed up, I’m sure they would have assumed I was the one they were looking for.

This is the first time I’ve ever been in a situation like this and had to decide to either stay put or inject myself into the situation. We all have to make our own decisions. Personally, I know I made the right choice for myself and my family. Stay put, keep an eye out and let my neighbor what was going on from the outside since he was holed up in his house.

What would you have done in this situation?

Everyone has their own level of training. Would my good friend that has been with law enforcement for many years, is on the SWAT team and has done a good bit of work overseas with a private security company have stayed put or ran toward the situation? I have no idea. I haven’t talked to him about what happened yet. But I have no law enforcement experience, and I definitely don’t have the type of training that would make me feel comfortable to go running down there.

And what exactly could I have done anyway? As far as I knew, there was no one else in the house other than the boyfriend since the daughter was no longer there. So there would be no reason to go to the house to confront him.

When Seconds Count The Police Are Only Minutes Away

The second thing I would like to point out is this same friend gave me a weird look a few months back when we were discussing firearms. It came up that I sleep with a pistol on my nightstand. I switched from having it in a drawer to on the nightstand after being on an episode of First Person Defender which you can see here:

He thought I was crazy that I slept next to a pistol. He said we live in a nice neighborhood and there’s no need for that. But who was the first person he called when shit hit the fan? Me.

And although the police showed up pretty quick, it was probably between five and ten minutes from when they called. That is plenty of time for someone to kick your door in. And then what do you do? Pray for the police to get there faster? I’d rather have a firearm to be prepared to protect my family.

So what did my neighbor and I talk about the next day? The fact that he might be interested in getting a gun for home defense. Another neighbor told him that’s not a good idea since he’s not a “gun guy.” I disagree. No one is a “gun guy or gal” until they decide to get a gun. And what does that even mean anyway?

He asked about shotguns versus pistols and a few other things. I told him whatever he decides, shotgun or pistol, he must be willing to spend the time and money to seek professional training with the firearm he chooses and spend time at the range with it regularly. I offered to bring him to the gun range to shoot some different types of pistols and shotguns, but I am not a firearm instructor. He would still need to get professional instruction, and I could recommend a few instructors to him.

And lastly, he also needs to be 100% sure he is willing to use a firearm if he decides to get one for self-defense. If not, it doesn’t do any anyone any good.

As a USCCA Member, I have learned it is to defend and protect yourself and your family. We are not police. We have proud men and women who made that oath to serve and protect. I respect it, so why would I want to do there job.