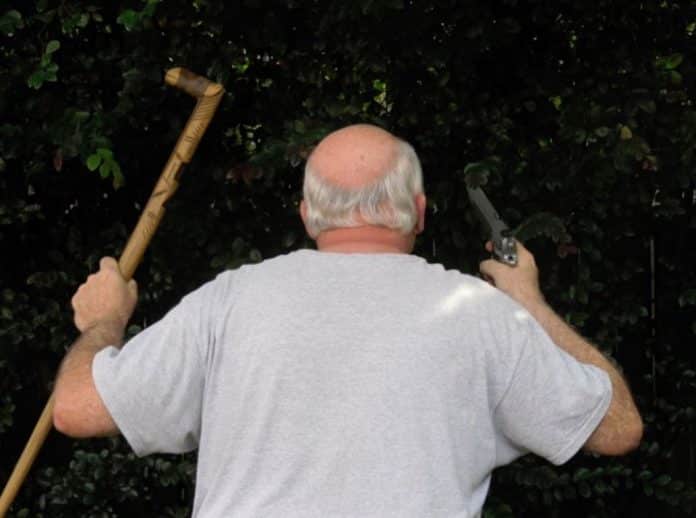 “Senior citizens” now represent the most rapidly growing segment of the United States’ population. Some estimate that currently one in every eight Americans is age 65 or older, a total of more than 35 million. By the year 2030, as “baby boomers” age and life expectancy increases, this number will increase to an estimated 64 million. Naturally, as the body ages, our ability to run away, avoid, and defend ourselves from attackers diminishes significantly. Old age brings physical, emotional, and mental infirmities, including usually a fixed income and especially poor eyesight. As much as we do not desire this or want to accept it, we must expect it and deal with it. Most “senior citizens” over the age of 60 have difficulty defending themselves against physical and weapons attacks.

Although some national surveys indicate seniors represent a relatively low victimized age group, they often exhibit the greatest fear of crime, due at least partially to their fear of personal vulnerability. Because of the natural consequences of aging, i.e., loss of hearing and/or eyesight along with other chronic and debilitating conditions, senior citizens perceive themselves as more vulnerable to physical injury if attacked.

Are You a Senior Citizen with Legal Protection?

So are you a “senior citizen?” I don’t like it, but I am. I get my senior discounts, but the age requirements vary. You have to be age 50 to get your Krispy Kreme, Sheraton Hotel, and National Car Rental discounts. At least age 55 to get your McDonald’s, Belk, IHOP, Chic-Fil-A, and Kentucky Fried Chicken discounts. Age 62 allows you a Captain D’s Seafood discount, while age 60 gets you Kohl’s, Ben & Jerry’s Ice Cream, Burger King, Regal Cinemas, and Super Cuts discounts. Age 65 gets you Hardee’s, Boston Market, Taco Bell, and American Airlines discounts. Age 100, whatever you want (?– so I have been told).

Some states have adopted statutes that provide explicit criminal penalties for elder assault and abuse in its various forms. Other state legislatures have enacted stricter penalties for certain crimes where senior citizens are the victims. While the definition of “senior citizen” varies a lot, it usually is defined as those age 60 (or age 65 in several states) and older. Most laws addressing elder assault and abuse also apply to adults of any age and are similar to child abuse laws. Some state laws, like Florida’s Statute 784.08, prescribe harsh, inflexible penalties for those caught assaulting or battering someone age 65 years or older. But, there is considerable debate over what is elderly or who is a senior citizen among the states and courts. So, check your particular state laws. Does a person become elderly with frailties on his sixty-fifth birthday, or on his sixtieth birthday, or on his fiftieth birthday, or is a person as old as they feel or as defined by the state? Some people should be considered elderly even if they are younger than the usual statutory minimum age of sixty-five, particularly those who have serious health problems that have aged them beyond their years. So realistically it is just not chronological age consideration, but the condition of each individual’s health and the applicable state statute that determines the applicability of the law and the individual capabilities to defend ourselves. However, there are some laws that protect folks based purely on their chronological age, e.g. in Florida. It is possible that you the attacker could be shot (or killed) by a senior citizen and they could walk away without any punishment… even if you were unarmed. Think twice, no three times, before you assault or get in a gunfight with a senior citizen, especially in Florida.

In some states, elder assault and abuse laws are incorporated into assault, battery, domestic violence or sexual assault statutes, and a sentencing enhancement imposed if the victim is over a specified age. Illinois and Florida seem to this non-attorney to use a combination approach, recognizing separate crimes for aggravated battery of a senior citizen and for criminal neglect or financial exploitation of an elderly person, but including the age of the victim as a special classification under their aggravated criminal sexual assault and abuse laws. In California, I understand that restitution for medical and psychological treatment is mandatory for victims of assault, battery, or assault with a deadly weapon for victims over the age of 65. In California, the State assigns a single prosecutor to prosecute cases where individuals 65 and over have been physically attacked or financially abused. The goal is help provide more continuity and success in these types of cases. California also has implemented specialized forensic review teams to better identify and respond to suspected cases of elder abuse. A few states, such as Iowa and Oregon, have chosen to include age as a hate-violence crime characteristic. In Nevada, an offender who commits a crime against a person over the age of 60 is subject to a prison term twice as long as that normally allowed for the same offense. A Louisiana law mandates that all violent crimes against the elderly be punished by a minimum of five years imprisonment with no opportunity for parole. The Juvenile Court in Louisiana may distribute unclaimed restitution to elderly victims of other, non-violent crimes for whom restitution has been ordered but not paid. Georgia imposes an enhanced penalty for unfair or deceptive business practices directed toward the elderly. Rhode Island mandates restitution for breaking and entering the dwelling of an elderly victim. A number of other states consider the victim’s advanced age to be an aggravating factor to be taken into account when determining a sentence. For example, in Arizona there are special penalties for assault and/or abuse of the elderly with intentional infliction of physical harm or sexual assault. KNOW your state’s laws about assault of elderly and senior citizens.

It is my layman understanding that all victims of violent crime are allowed to file for compensation in order to recoup the economic losses they suffer as a result of the crime. Many states have “minimum loss standards” for seniors ranging from about $200 that preclude claims for lesser amounts. Other compensation programs require victims to absorb the first $100 or $200 of their loss, like an insurance deductible. Given the economic hardship even a small financial loss might be difficult for elderly victims on fixed incomes, so many states have waived minimum loss and deductibility provisions in cases where the victim is 65 years of age or older. The specific age does vary from state to state.

As a non-legal, non-attorney in my state of Florida, I understand that it is not required to prove that a bad guy or gal specifically intended to commit an assault or battery on a person the age of sixty-five or older. They would only need to intend to commit the assault or battery, not necessarily intend to commit the offense on a victim aged sixty-five or older. Requiring defendants to have knowledge of the victim’s age at the time of the attack would be difficult. So, if you commit a crime on someone age 65 or older in Florida, claiming you believed the individual to be under the age of 65, is NOT a defense to the charges. So in Florida be careful if you attack someone who might be age 65 or older. Why? Because penalties and punishments are reclassified and increase for assaults and batteries on the elderly. Both assault and battery crimes escalate to the next level if an elderly person is involved. If the victim is elderly, in addition to the minimum mandatory sentence imposed by the statute, the statute also reclassifies battery from a misdemeanor to a felony, punishable by a term of prison of up to five years and a fine of up to $5,000. Aggravated battery becomes a felony of the first degree, with 30 years in prison and a fine of up to $10,000. Further according to the statute, anyone who is convicted of aggravated assault or aggravated battery upon a person 65 years of age or older shall be sentenced to minimum of 3 years in prison and will be forced to pay fines of up to $10,000.00. The individual will in addition be ordered to make restitution to the elderly victim and to perform up to 500 hours of community service work. This must be completed in addition to any other fine or sentence. Again, check your state’s related laws, since I am not an attorney and have very general information.

Actions & Words That Constitute Threats to the Elderly

My layman’s interpretation of Florida Statute 784.08(2) allows me to believe that an assault on a person 65 years old or older occurs when:

In order for the state to convict you of assault on an elderly person in Florida, I generally understand that the state must prove:

Certainly, the facts of the situation and interpretation of the various laws are crucial in determining if the crime of assault or battery happened. So whether you are a senior citizen or have a beef with one, tread lightly and be aware of the varying age requirements, specific state laws that reclassify crimes against the elderly, and the severe penalties and punishments. This applies to both the elderly victims and the elderly criminals.

Crimes By the Elderly

The “senior citizen” moniker is a double-bladed sword. While we sympathize and commiserate with the elderly victims, seniors themselves commit some nefarious acts. Recently, a group of German seniors between the ages of 61 and 80 kidnapped a financial advisor and locked him, half naked, in a lake house cellar. The seniors took turns beating him and demanded a ransom of $1.4 million they felt they were owed for his bad investment decisions.

Just a few years ago, three senior men were arrested for plotting to rob an armored car in Chicago. The men were between the ages of 69 and 73. Jerry The Monk and Arthur The Genius teamed up with Bobby to rob a bank and a house belonging to an old mob leader.

A 73-year-old Ms. Virginia was arrested for stealing toys from the Toys for Tots program and selling them for profit. As you probably know, the Toys for Tots program is run by the U.S. Marine Corps and designed to help impoverished children who otherwise would not have a Christmas. At the time of her arrest, police recovered over 11,000 toys from her house and storage unit which equates to 11,000 sad kids at Christmas.

* This personal opinion article is meant for general information & educational purposes only and the author strongly recommends that you seek counsel from an attorney for legal advice, your own personal certified weapons trainer for proper guidance about shooting & using YOUR firearms, self-defense and concealed carry. The author does not intend for this information to be legal opinion or legal advice. You alone bear responsibility for making decisions and acquiring professional legal information and guidance applicable to your specific state or jurisdiction. This information should not be relied upon as appropriate for all shooters & the author assumes no responsibility for anyone’s use of the information and shall not be liable for any improper or incorrect use of the information or any damages or injuries incurred whatsoever.

© 2015 Col Benjamin Findley. All Rights Reserved. This article may not be reprinted or reproduced in whole or in part by mechanical means, photocopying, electronic reproduction, scanning, or any other means without prior written permission. For copyright information, contact Col Ben Findley at [email protected].