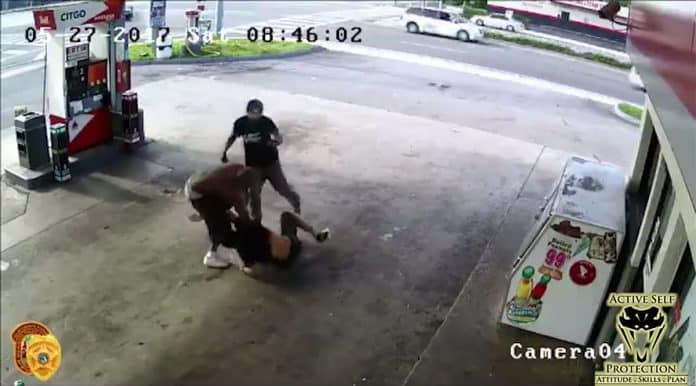 An ever-present mistake that arises among armed citizens is the inclination to chase after wrongdoers. Every year there are a few well-reported incidents in which this syndrome plays out. After a defensive gun use a robber flees the scene. Then the defender chases them outside and through the parking lot. Worse yet, after someone steals something from a store an over-zealous citizen gives pursuit. The inclination to chase down someone who has wronged us in some way is a strong human instinct. However, this is an inclination that can get a defender killed or criminally prosecuted. If a fleeing criminal has an innocent person in tow then pursuit is justified and understandable. But short of that, it is simply not.

Property Loss is Not a Justification for Lethal Force

Most often you will be unjustified in using force, especially lethal force, to protect property. If somebody breaks into your car and grabs your backpack, then runs down the street, let them go. While allowing a thief to run away with your property may be indignant, there is no material item that is worth your life, or worth taking the life of another, even if that individual is a good-for-nothing thief. If somebody flees your home with your television, let them go, that is what insurance is for. What item that a person could run away with is worth somebody getting killed over?

Let’s go beyond the understandable inclination to chase someone who steals your own stuff. A truly amazing phenomenon is the inclination among some to chase after shoplifters who steal something from a store. Chasing after a shoplifter to retrieve something that they stole from a retailer is not your job as a citizen; that is exclusively the domain of law enforcement. Some may argue that evil thrives because good men do nothing. The dangers that chasing thieves opens you to is enormous, regardless of your chivalry.

The majority of states allow the use of force for the defense of life and limb, not material possessions. Injuring or killing a person to retrieve or defend a thing is generally not justifiable. This does not refer to defending yourself within your home or vehicle, as doing so involves protecting life. Protecting yourself from a carjacker that tries to take you out of your vehicle by force? Chasing down a thief who steals your car while you are still walking towards your vehicle in a parking lot? There’s a difference. Let the car go (unless you have loved ones in the car, of course).

Consider the dangers involved in chasing a potentially violent criminal actor down the street or through an ally after they just stole something from you or someone else. Even low-level criminals can become violent when they are pressed into a situation where their detainment may mean ending up in prison or perhaps going back to prison. If you think that any thief will simply come to a stop, put their hands up, and let you hold them at gunpoint until the police arrive, you may be severely mistaken.

The notion of pursuing, tackling, and physically subduing, the offender is inherently dangerous. One must operate on the assumption that weapons are always present. Upon tackling a fleeing suspect, a blade or gun can be rapidly produced and used. The dangers posed by such action are entirely too fraught with risk to be worth any particular property.

Consider the risk that such pursuit poses to other people in the vicinity. As if the possibility of injury or death to yourself is not persuasive enough. Consider what can happen if a criminal shoots at you. Where will those rounds land, if not in you? Also, a fleeing thief can quickly become desperate if pursued. Taking a hostage might not be out of the realm of possibility.

Finally, avoid the most outrageous mistake we have seen happen on occasion: do not shoot at a fleeing thief. Does the criminal no longer pose a threat to anyone? Then there is no justification for shooting him as he flees. There are exceptions. Such as an active shooter who may be fleeing only to gain cover and fire back. But a robber who didn’t hurt anyone and is now running out the door is no longer an imminent threat. From a safety standpoint, pursuing criminals or shooting at them as they run is a no go for the citizen.

After a crime is committed, even if it involves armed robbery, once a criminal actor flees the situation the crime is over. Your desire for retribution or revenge has nothing to do with it in the eyes of the legal system. Once the threat is over, the justification for lethal force is over. If you pursue a fleeing criminal that just stole something from you, the law now sees you as the aggressor that is starting a separate fight. You might not like it, but this is how the law views the circumstance.

Being the aggressor that starts the problem is never good for you under the scrutiny of the legal system. Upon making contact with a fleeing criminal actor, you will be held accountable for any force that transpires. If everything goes well and you tackle and detain a robber or shoplifter you may be hailed a good Samaritan. What if things get violent and you end up using force? What happens if that action results in significant injury or death for the fleeing criminal? You may face severe legal repercussions.

Chasing criminals, in general, is a no-go for the citizen. Not only is it incredibly dangerous for all involved, but it is also legally precarious. Unless the fleeing criminal has an innocent person in their hands, there is no legal justification for it. In the event of witnessing a robbery or shoplifting, be a good witness. That means call the police, and provide a good description, if possible. Leave the task of chasing criminal actors to those in uniform.