6 Flashlight Shooting Techniques You Must Know 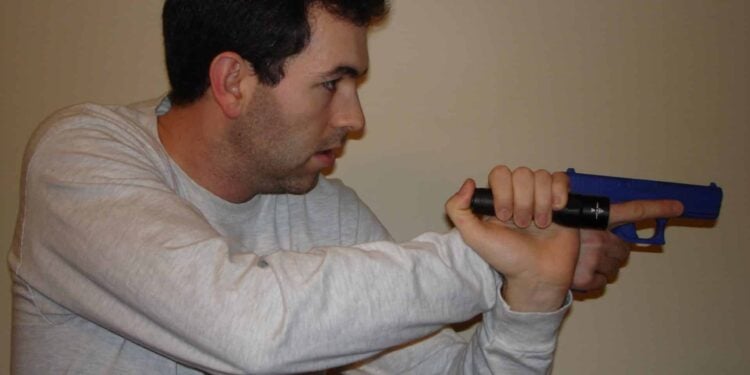 The majority of self-defense shootings occur during low-light or the night time. The exact statistics are all over the place, but I’ve most frequently seen them as saying 60% to 79% of shootings occur in these conditions.

Next, I would not recommend mounting your flashlight on your pistol.

This causes the major problem of pointing a loaded gun at everything you shine your light on. If your 16-year-old son is sneaking in the basement and you run down there to shine a light to see who it is, I doubt you want to point the loaded firearm at your kid.

Since you’re not going to have a light on the gun, you need to learn one of several flashlight shooting techniques. By far, the most popular technique is the “Harries” method. It was developed in the 1970’s by Mike Harries, a former Marine.

Simply put, if you’re a right-handed shooter you grab the flashlight with your left hand in the “ice pick” grip. In other words, the way you’re holding the flashlight should allow you to strike downward with force as if you’re stabbing someone. Also, your left thumb operates the pressure switch on the end of the flashlight.

Once you have a solid grip on the light, bring your left hand underneath the gun and put your hands back to back. When you are doing this do not cross your hand in front of a loaded gun, make sure and bring the light underneath the pistol and not in front of it. Maintain pressure bringing both your wrists and the back of your hands together.

Another popular flashlight technique is the Chapman… 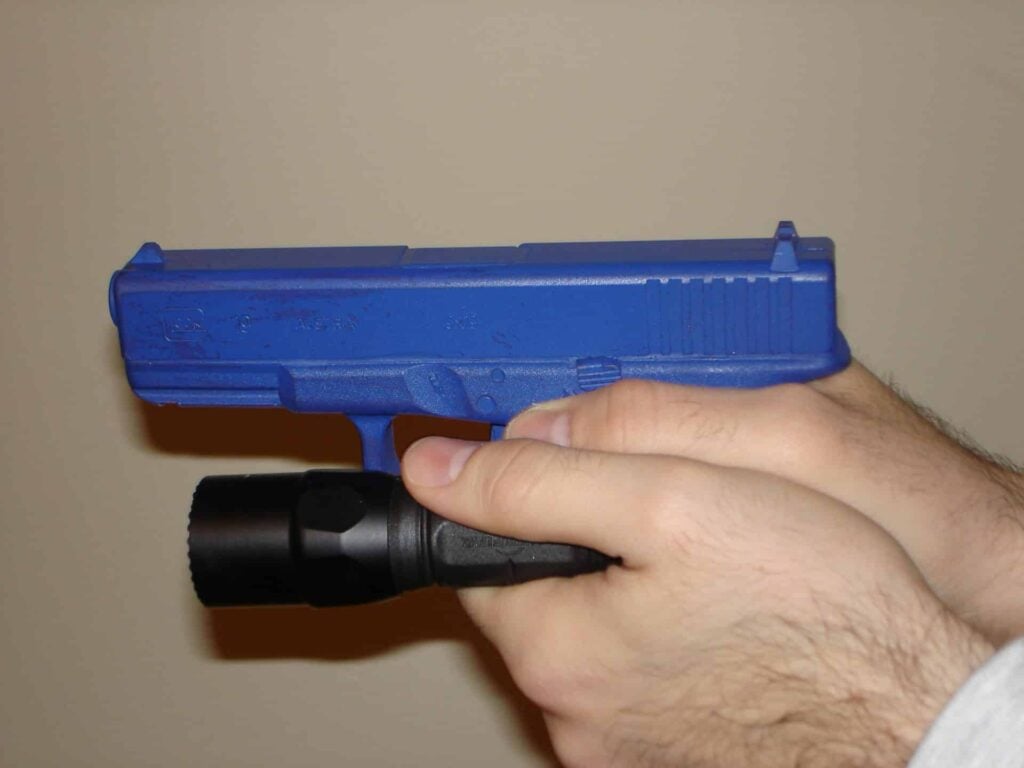 The Ayoob flashlight technique was developed by Massad Ayoob, a well-known firearms instructor, and author of many books, including In the Gravest Extreme. The Ayoob technique is very similar to the Chapman in that you hold the flashlight in the “sword” grip. The only difference is, instead of holding the flashlight underhand, you hold it overhand and you bring both thumbs together as if you’re shooting in the traditional “thumbs forward” grip. 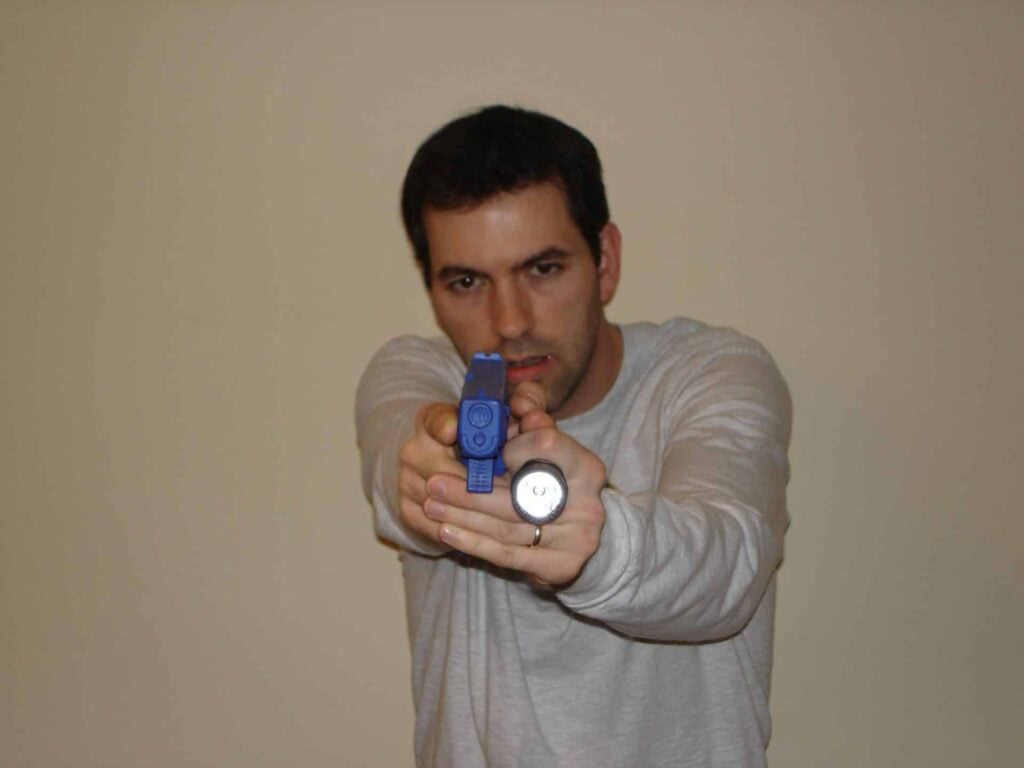 Former FBI Agent and firearms instructor Bill Rogers created the Rogers flashlight technique. This is where you hold the light in between your index finger and your middle finger. You bring the flashlight up to the side of the gun and have your thumbs touch and your other two fingers wrap around your shooting hand. This method allows you to get closer to a two-handed grip than any other flashlight shooting technique.

The Neck-Index technique seems to get more popular by the day and can be used with most flashlights, whether they’re big or small, and whether the pressure switch is on the end of the light or on the side. You use the “ice pick” grip for this technique and hold the flashlight right below your ear close to your jaw and neck. An obvious disadvantage of this technique is that the flashlight is directly next to your head so if a bad guy is shooting at the light you’re in trouble.

I can’t talk about flashlight techniques without mentioning the old FBI technique. This is where you hold the flashlight in the “ice pick” grip up in the air and away from your body. The theory behind this technique is that you’ll disorient an attacker because they won’t know where you’re at and if they shoot at the light they won’t hit you. This technique is good for clearing a room, but if you have to hold the flashlight for an extended period of time your arm becomes tired very quickly.

Personally, the methods which I prefer are the Harries and the Neck-Index, but you need to figure out what works best for you. Also, don’t forget to practice reloads and clearing malfunctions with the flashlight. If you use a lanyard with your light you can simply let it drop and hang from your wrist when reloading. However, if you don’t use a lanyard, you’ll need to practice putting the light under your armpit with the light facing to the rear, when doing these exercises.

In addition to dry firing at home, don’t forget to take your flashlight to the range with you to practice these different techniques because you never know when a window will break at 3 am and you’ll be extremely happy you learned one of these simple flashlight techniques.