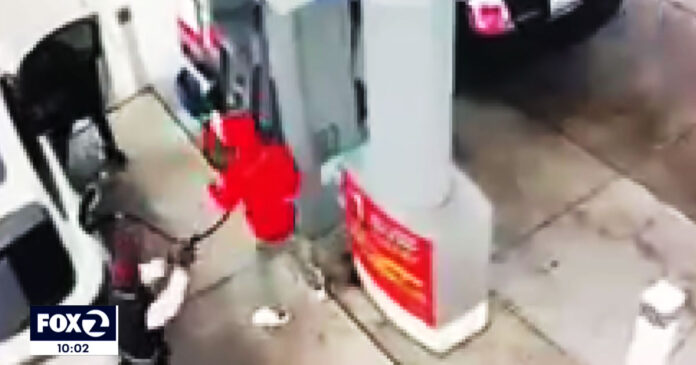 A shootout between a retired police captain and four armed robbers leaves the victim in critical condition and one suspect dead.

This incident happened last week at 1 PM on a Thursday. AKA broad daylight. The retired police officer pulled up to a gas station in his white Porsche. As he was pumping gas, a black car pulled up, and three armed suspects got out. The suspects brandished their firearms and attempted to rob the retired police captain.

After a close confrontation, the victim was able to make some space from the attackers. As one of them opens his passenger door, he sees his window of opportunity and draws his concealed carry gun.

As the victim engages with the other suspects, they return fire, hitting and critically injuring him. The suspects then try to drag their accomplice into the car but leave him to die on the pavement as they drive off.

This is a hard story to read. Luckily, the retired police captain is in stable condition and was reported to be in good spirits the following day. A man who spent 28 years as a police officer serving the public gunned down by some cowards trying to steal his wallet and/or car. But take a step back and see what we can learn from this incident.

It was reported that the “suspects were armed.” We don’t know if all four of them were armed or just one or two. Regardless, the victim is outnumbered three against one. That’s starting with a disadvantage. While the victim drew his gun and hit one, possibly two of the suspects, he still had two or three more to deal with.

Could this have been avoided if he had just given them his wallet, keys, or whatever they were asking for? Possibly. Possibly not. But in general, we don’t recommend using a firearm to protect property from being stolen. The risk of losing your life over a wallet or car just isn’t worth it.

And I know there will be comments about letting criminals walk all over you or, by doing so, you are being a coward. The decision is ultimately yours on when you will use a firearm in self-defense. It is up to you to figure out if it is worth it or not.

Living in Oakland, involved in a marijuana business, and driving a Porsche all contribute to a situation where you would be a target. They approach him from the back and the front, actually lay hands on him, where it looks like he drops his wallet to the ground (I’ve seen this tactic before, it allows the victim to change the focus and slip out of a cornered situation). At this point it may appear he can walk away from the situation and let the thieves have what they want. He chooses to put his life on the line to protect his property. Considering that he is an Oakland native and an experienced/retired LEO, he may have drawn chalk lines around dead bodies giving up property worth far less than his.

I understand the “give the thieves what they want” mentality, I certainly expect do that in the line of work that I do. But the world has gone crazy, there seems to be no limit to the depravity of the predators or the systemic dereliction of those tasked with government’s principle obligation: security. If one assumes the violent are more unaccountable, and so more brazen now due to the political environment our elites have created, can one reasonably think these days that thieves will be happy just taking your property?