It has been said that the greatest question you will ever ask when searching for the meaning of life is, “Why am I here?” It can also be said that the worst question you could ever ask when faced with a lethal encounter is, “Why am I here?” All too often though this is precisely what is asked by the soon-to-be victim of violence. Why is this? The answer is quite simple: they never saw it coming.

General George S. Patton taught, “You teach a soldier they can be forgiven for being defeated, but they can never be forgiven for being surprised.” How true that is. A study was done during the Vietnam Conflict that the late Colonel John Dean “Jeff” Cooper participated in when he was studying the affects an exposure to a lethal encounter had on individuals. During this study they interviewed any soldiers who were both physically shot, recovering in a hospital, AND who became unconscious immediately upon infliction. The astonishing thing they found was that every one of those soldiers all believed they had died, and when they came to, couldn’t believe they were alive. They asked these soldiers, “What was the last thing you thought about right before you went unconscious.” The answers were resoundingly the same. “Oh my God!” “Nooo!” “Not me!” “Why am I here?”

As Jeff Cooper observed, and as you can see, there is a great connection between falling to someone’s attempt to victimize you and you being surprised that it is happening. As a result of this information, Jeff Cooper immediately implemented the “Combat Mindset” into his training. Cooper notes in his book, ‘Principles of Personal Defense,’ that out of the thousands of students he taught, no one contacted him after they had to defend their life or the life of a loved one and said, “It was the superb firearms training I received that saved my life.” They all said, “It was the mindset training I received that saved my life.” Now this article is not a recourse in Cooper’s teachings but rather a continuation on that very principle. So many, including the NRA, have followed suit and adopted mindset training into their defensive pistol courses. There are many spins on this principle: “The best way to win a fight is to avoid one,” “You have to act, not react,” Be one step ahead of your adversary,” “The best defense is a great offense,” etc.

The point to take away from this is that you should never be surprised! This starts first with a realization that it can happen to you, and secondly, a determination that it won’t. So what can you do when you are faced with a lethal encounter? There are only three things:

It all starts with awareness. If you are very aware of your surroundings it will be that much easier for you to be prepared when you see the signs of a lethal encounter coming your way. It will be that much harder for you to be surprised. Your assailants will take advantage of the element of surprise. Where avoiding and evading a lethal encounter differ from each other is in what you are aware of. If you find yourself more aware of external factors, you are better prepared to evade a lethal encounter than to avoid it. Things like knowing potential escape routes, knowing the best way to get help, identifying any non-threatening people you can congregate towards, and knowing where you can safely barricade yourself should the need arise.

However, avoiding a lethal encounter demands an awareness of you. What do you look like to your perpetrator? Do you look like a victim? What does your home look like to a burglar? Does it look like an easy break-in? Where are you right now? Is it a good place to be or is it a place inherent to crime? If you are caught unaware, what safe guards do you have in place to buy you enough time to deter a lethal encounter from happening? This type of awareness, and the precautions taken as a result of it, will diffuse most of an assailant’s contemplations of victimizing you. This is the prime reason why stores have security personnel. Their job is to observe and report but the stores know that security guards also have a huge benefit in deterring most would-be thieves. Yes, it isn’t enough for the more determined criminal, but it has a powerful effect on the more common and less determined.

So why do we train with our firearm? Because it is our tool of last resort. When we can not safely avoid or evade a lethal encounter, we only have one option left: FIGHT! We do not submit, we do not posture, we counter any attempt of another individual to seriously harm us or another. Our counter can not be an attempt. It must be a success. We will win! The training you invoke has to start with that resolve. That you will NEVER give up. So far many of you have already heard this before and are whole-heartedly in agreement. But here is where the major disconnect begins. If awareness, avoiding, and evading are just as important to our prevailing as our firearm skills are, then why do so many people train with their bodies in a crouched or hunched over position? Why is it assumed that you will duck down when faced with a threat? For those who are responding to this statement defensively and emotionally, hear this last point. This is NOT the same thing as purposefully presenting yourself a smaller target, or getting behind low cover, or assuming a shooting position that requires that type of stance. We are discussing the assumption that you will always dodge an attack when someone comes after you.

There seems to be a new trend in teaching pistol presentation from a holster that starts with the person in this crouching/hunching position. There is advice incorrectly given that people should buy a holster that has a forward cant because it is incorrectly assumed that type of holster was developed to allow them to easily access and draw the holster while hunched over. The old wives tale that its forward cant is called the “FBI rake” because the FBI started using holsters like this due to this very benefit. This is just not correct. On March 30, 1982 the FBI wrote Jack Weaver a letter explaining their decision to use his grip and stance in their formal training. The FBI, also around that same time, incorporated the forward canting holster to all of their agents, but it had nothing to do with its added benefit to presentation from a crouching, hunched over position. It had to do with the fact that FBI agents are plain clothes officers. Concealability was their main concern when selecting this holster. When ever you are using an outside the waistband holster, a forward cant hides the butt and hilt of the gun the best. But outside the waistband is not the best mode of concealment out there. Today we have the inside the waistband holster made popular amongst us citizens and off-duty police officers. We citizens have a greater need to conceal our firearms as thoroughly as possible, even sacrificing practicability, than plain clothes officers do. 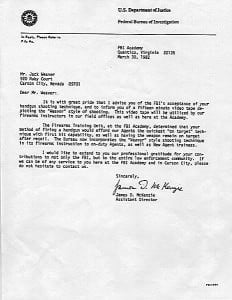 To understand this you have to first understand the characteristics of the Weaver Stance. The Weaver Stance is not a hunching over shooting position at all! It is a stand straight up, feet shoulder width apart, knees slightly bent, head erect, and gun brought up to eye level stance. So if the FBI chose the Weaver grip and stance which does not place the shooter in a crouching, hunched over position, why would we assume they needed a forward canting holster for more efficient drawing? Training this way assumes you will be taken by surprise. Law Enforcement does not train this way. They are trained to always be looking, to assume it can happen to them and even will happen to them. Their training includes being aware whenever humanly practical so they will have the greatest probability of seeing it coming.

If you have been taught or are teaching this philosophy, the intent is not to belittle you or your teaching. It is to encourage you to consider how you view yourself receiving an attack and to challenge you to train more on your ability to “take the fight to them” when countering. There is some truth to this philosophy but it is based on being surprised. A crouching/hunching position will naturally happen when the sound of gun shots are surprisingly heard, when a gun is surprisingly seen, when a group of obvious assailants surprisingly walk into your proximity. But that will only happen whenever you are found unaware. The goal here is not to make sure you are never unaware. That is completely impractical and extremely stressful and is basically paranoia. The goal is to live a life worth living and while doing so be aware whenever humanly possible. Daily activities of sleeping, reading, driving, conversing, all inherently make us unaware of potential threats. We will either stop scanning for potential threats or be unable to in those moments. So we have to learn to purposefully entwine data gathering periods of our environment and situation when in these moments, or, setup enough time-producing safe guards to give us an opportunity to become aware when we are not. Think about it, home security alarms wake you up before the invaders make it to your bedroom. Yes the police will be notified to, but they are many minutes away. The real benefit is buying you time to prepare.

Remember violent encounters are quick, dark, and close in. The more aware and prepared you are of them happening the more time, light, and distance you give yourself. The more time, light, and distance you have, the more successful you will be at prevailing that encounter. Whether you’re avoiding it, evading it, or countering it. The more you practice being aware and determined, the more prepared you will be for that fight when it comes. Please understand firearm training is very important, but it often takes the front seat to mindset development. With stronger mindset training, any defensive firearm training you have will be significantly more efficient in its real world use because you will have more time to get behind cover, to take a proper shooting position for that situation, to deliver your fundamentals, to correctly choose the greatest and most immediate threat. Besides, with a strong mindset, you will be that much more prepared to avoid and evade before countering is even necessary. Can you see the benefits awareness afford you in comparison with having an amazing ability with a firearm but finding yourself dodging bullets you didn’t see coming? Now for those situations you don’t see, that you couldn’t be aware of, that truly caught you by surprise, a reactive measure is all you can do and that is where pure firearm training will benefit you most, but even then it will be up to chance because it will be just that, a reaction.

That is all for now. Be safe out there.