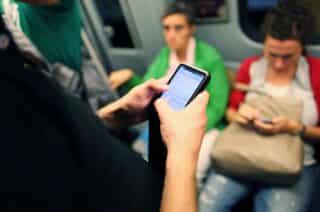 By now, you’ve probably heard about the murder that took place on a San Francisco commuter train. The gunman didn’t quickly pull out his gun and shoot someone… instead, he pulled out his gun multiple times and even used it to wipe his nose before shooting someone.

However, not a single person on the train noticed him pulling out the gun because everyone was absorbed in their cell phones. As the District Attorney stated, “These people are in very close proximity with him, and nobody sees this… They’re just so engrossed, texting and reading and whatnot. They’re completely oblivious of their surroundings.”

I’m not going to go into a lecture about situational awareness because if you’ve ever trained with me you know how important it is, and you’re aware of the color code. What I do want to share with you today is how you should react if you ever find yourself in a similar situation. In fact, I got the following question (below) from a gentleman named Phil H. that fits perfectly with what I want to share with you.

Phil H. wrote to me regarding the train shooting, “I’m not going to comment on the obvious issue of awareness, but my question is how should a CCW holder react to a situation like that? It was a crowded environment. Making the other passengers aware could spark a panic. Shooting the gunman before he has shot his weapon doesn’t seem like a good option. Nor does doing nothing and just being a good witness. But with the crowded environment, taking any action could endanger a lot of lives. So what is the best response to a gun threat in a crowded environment?”

In this specific instance of being on the train, drawing and shooting is definitely not the way to go. It’s too crowded and people are packed into each other like sardines. Also, I wouldn’t just sit there and be a good witness. Obviously, a person can choose to do what they wish, but if the gunman shoots someone and you just stand there and watch… you might be next. If I found myself in that situation I believe the best option is to go hands-on.

The gunman in this case gave a world of opportunity for people to stop him, he was begging for attention and was almost saying “please notice me” when he pulled out the gun multiple times before actually using it. There was plenty of time for a passenger close to him or even several feet away to go hands-on and disarm him.

There are several different techniques for disarming a person with a gun and I know that police academies teach one way, the martial arts teach another, and federal agencies teach another. However, the method I like is what the Secret Service refers to as “Grab, Squeeze, Break, Pull.”

All of the actions in this disarming method happen almost instantaneously but here’s how it breaks down. You grab the gun and squeeze (you are squeezing the person’s hand on the gun, so your hand is on top of theirs wrapped around the gun.) As soon as you grab and squeeze you chop down on their arm to make it bend at the elbow and you pull forward throwing them forward and off balance to the ground where you then remove the gun.

Again, this is just one method of disarming a person with a gun and you should find what works best for you. But in a crowded situation like a train or bus, going hands-on and disarming the threat is often the best solution.

Also, if you ever go hands-on, you don’t have to create a panic or start screaming. In the train situation, as soon as someone saw the gun they could have quickly and silently made their way to the killer and brought him down without anyone getting scared and getting in their way in the panic.

Of course, I do recommend that you take some self-defense training and learn how to go hands on so you know how to properly do it should the time ever arise.

The Hellcat from Springfield Armory | 11+1