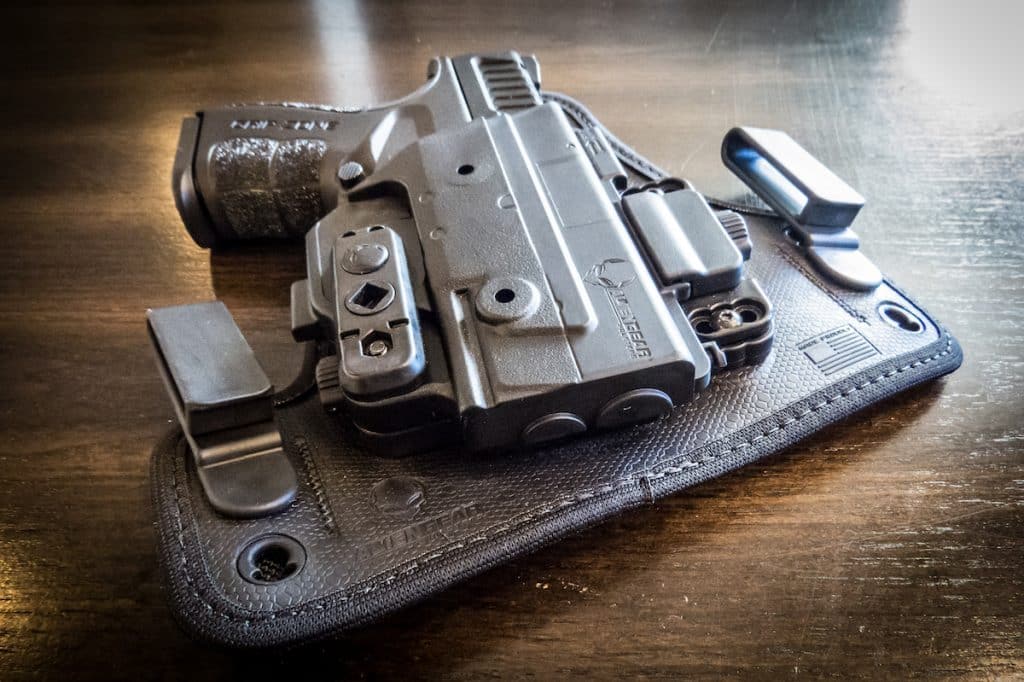 The term “hybrid” originally referred to a holster made of two materials, typically leather and kydex. The traditional hybrid concept used leather as a comparatively larger “backer” for the holster that rests against the body and affixed to this is typically a shell made of kydex or other hard material that houses the gun. I have used a variety of these holsters and my daily carry holster as of this writing is an Alien Gear IWB (Inside the Waistband) holster. The models of Alien Gear holsters that I use actually utilize a synthetic material as a backer with a line of metal within to keep it rigid, thus eliminating problems that can occur with leather. These are more modern designs that use different materials but the concept is similar.

These holsters are obviously designed for strong-side hip carry and generally prove too large for appendix position. I have been very happy with the Alien Gear holsters that I use but there are other manufacturers who also produce hybrid designs. There are a number of advantages to these holsters and in my opinion a couple disadvantages as well. If you are considering utilizing one of these hybrid holster designs I will share with you some things to consider. Like all things related to gear, there are some positives and negatives to consider within the context of your own needs:

There are several significant advantages to the hybrid concept and in my opinion the foremost is stability. These hybrid designs fasten to the belt at two different points and these two clips side widely apart. This creates a very stable holster in the waistband. I find that the gun does not shift around at all when utilizing this design, a gripe that I have with almost any other type of holster. Hybrids are less likely to actually move in position on your belt than other designs, but they also prevent the gun from tilting within the waistband. Most traditional holsters that use a single or even multiple, clips or loops that are located close together tend to allow the gun to tilt in orientation throughout the day.

The stability of the hybrid holster leads to predictability in the position of your gun. Being able to draw your weapon quickly is an essential defensive skill and when a gun shifts around throughout the day in a holster the draw is inevitably slowed. There are some single-clip holsters on the market that do a good job of holding the gun in position if combined with a good gun belt but generally the hybrid design will prove the most stable.

A well-made hybrid will typically be quite comfortable since you have a large backer pressed against your body rather than just a small holster possibly made of hard material. I specify the designation of “well made” as I have tried hybrids that are poorly made and very uncomfortable. A well-designed backer tends to disperse the presence of the gun across a wider surface area, thus making it more comfortable for prolonged wear.

Hybrids also completely shield the gun from touching the body whereas most traditional IWB holsters do not. This further enhances comfort because the potentially sharp angles of the weapon’s frame or grip don’t push into the skin of the wearer directly, but into the backer instead. This seems especially helpful if you carry a gun such as a 1911 or other types that has exposed hammers and thumb safeties.

These holsters are often highly customizable. Well-designed hybrids often provide the ability to adjust retention on the gun itself, cant (angle of the gun) and even the depth at which the gun sits relative to the beltline. This excellent customization means that hybrids are often capable of accommodating a wide range of users and body types.

While I like hybrid holsters, using them almost exclusively, there are some downsides and for me, the foremost one is that they take longer to put on then some alternatives. They are more of a hassle to put on than smaller holsters that simply clip into place. This is the price paid for the excellent stability they provide. For some people, this is a non-issue as the holster goes on and stays on. For people who like to remove their weapon-holster combination, perhaps various times throughout the day, this is a consideration.

I find that I need to unfasten my belt, or at least have it significantly loose, to begin with, before I can put the hybrid holster on. I am able to simply insert and clip some of the slim-line kydex holsters I have used in the past. This can prove to be a hassle when entering prohibited environments in which you may need to remove your gun, and preferably your holster perhaps, and leave it locked in the vehicle. A consideration for some, certainly.

Hybrid holsters take more room than traditional holsters and when you remove them to put in a glove compartment or small safe they are significantly larger. This is a non-issue for some but certainly an inconvenience for others. The hybrid holster I am currently using is significantly smaller than most which I find beneficial as it fits into the glove compartment of a car or into a hand safe much easier. While many will dismiss this as a nonsensical consideration those you who carry daily and are forced to remove the gun for certain reasons throughout the day will find this consideration pertinent.

Traditional hybrid holsters utilize leather as a backing material. Leather proves very comfortable as a backer and with some time it breaks in to fit the individual user. The downside, however, is traditional hybrid holsters can actually wear to the point that the leather can begin to drape over the gun or in some cases actually trap the gun in place and impede the draw. This is a concern with holster designs that utilize leather, which is the most comfortable backer material, but prone to this issue. Newer designs that use composite materials tend to reduce or eliminate this problem.

So there are some considerations related to hybrid holsters. Like all gear, they prove ideal for some and less so for others. Consider your needs and give them a try if applicable.

Once you discover the simple method described below for installing hybrid IWB holsters you will find them just as easy to put on as a single clip holster. With this method, I do not need to loosen my belt.

The key is that it is easier to pull your belt/waistband away from your body at the small of your back than it is at your hip where the holster would actually go. Here is the “Easy-On” method that I use for mounting my hybrid holsters:

• With the hand of your strong side, grasp the hybrid holster with your thumb inside the Kydex towards the front of the holster and your fingers on the outside of the Kydex. Position the index finger so that it is touching the leather.

• With the hand of your weak side, reach behind your back, slip your fingers inside the waistband and pull it out slightly.

• Insert the hybrid holster inside the waistband at the small of your back so that the top of the Kydex is slightly above the belt line.

• Slide the hybrid holster from the small of your back to the final side location using your thumb to drag it and your index and adjacent finger(s) to guide it into place.

• Grasp the front clip and slip it up and over the waistband and put it in place on the belt.

• In the same manner, grasp the back clip and put it on the belt.

The holster is now mounted and the major CON to these holsters is largely eliminated. It can be done with the gun in the holster but is much easier with the holster empty.

Too large. I had one, brand I can’t remember, that squeaked when I walked. I just decided that leather is the way to go for IWB.